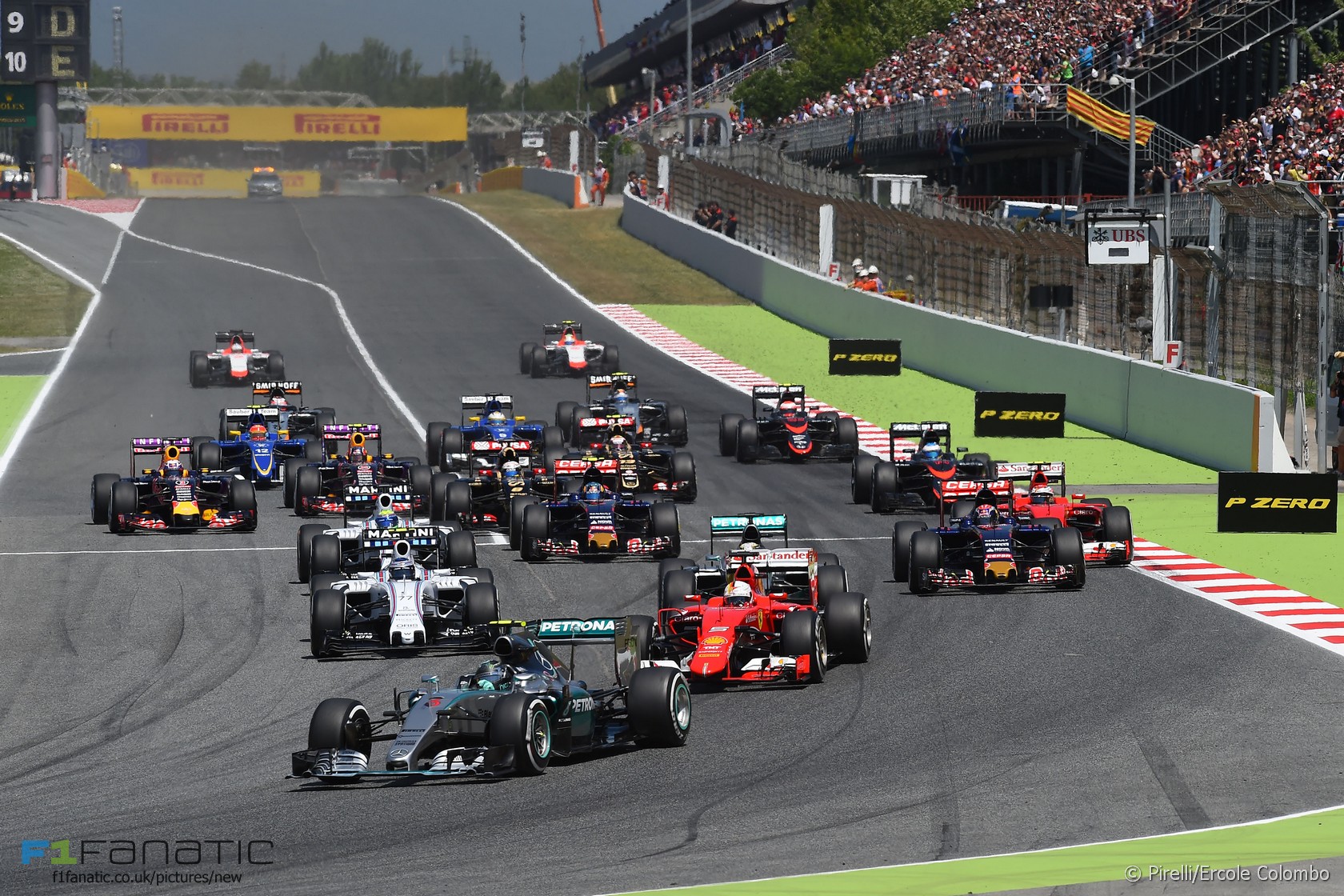 The 2015 Spanish Grand Prix did nothing to change the Circuit de Catalunya’s reputation for underwhelming races. An average score of 5.1 out of ten from F1 Fanatic readers is typical for this venue.

With the exception of Sochi Autodrom, which held its first race last year, no other venue on the current calendar has received consistently lower scores on average.

Just the track – or something more?

Typical race at Barcelona, you can’t do anything in this race. Its always car-dependent race.

Just show how fast that Mercedes is, easily one second per lap faster than Ferrari.
@Droiddamudi

I think it’s about time I admit Formula One is not for me any more.

Don’t get me wrong, I’m not complaining, I don’t have a better idea for the rulebook, and I’m not one of the guys saying that if I don’t like it, no one likes it and it should change. To each their own. I’m just a long-time viewer and I admit I personally don’t like it any more.

It has become way too clinical, too artificial and too restrictive (both on and off track). It’s too dramatic and the whole lifestyle and opulence around it is slowly starting to swallow the sport itself. The whole of Formula One has become a synonym for questionable decisions and an example of how the powerful ultimately prevail over the powerless. Formula One has become one of those always-tense reality shows where you simply watch ultra-rich folks pretending to have a go at life. And it’s on pay-per-view too!

I don’t care about that. I’m just one of those guys who wants to turn the television on every other Sunday and watch a proper race. I want to see diverse, interestingly built, good looking, fast cars performing to their mechanical limit irrelevant of their tyres performance, DRS or fuel usage. I want to see drivers performing at the limit, battling it out on the track with every chance they get, not sports megastars and pay drivers hitting beeps, pushing buttons and driving at a given target. I want them to become heroes through their personalities, grit and performances, not through their PR agency and Instagram account. I want to see risky strategy calls fully dependent on the driver’s skills.

I want accessible quality coverage and commentary. I want to hear interviews that provide relevant information from relevant people, not just the usual “it will be difficult but we’ll see if trying to beat another team for seventh place is possible this weekend, because that’s our target”, or check if Rihanna likes it or how Hamilton’s brother is doing or whatever. I want proper informative team radio, not pieces of constant complaints cut in a particular way to enhance the drama.

I want to watch a race, not have an audio-visual, multi-dimensional entertainment experience. I want what the WEC has to offer. Not the premium, overpriced, corporate product that is F1.

Watching the Spanish Grand Prix a week after what was a brilliant sportscar race at Spa Francorchamps made it clear for me. That’s it. Sorry, F1, but it’s been too many disappointing years.
Antonio Nartea (@Tony031r)

It’s the same in all sports, you cant always expect a nail-biting finish every time, yet I always see F1 fans wanting more drama in every race.
@Illusive One striking feature of last week’s race was the drivers appeared to find it either impossible to get close enough to attack the driver in front, or had so much of an advantage they were easily able to get by using DRS.

In my opinion a thoroughly uninspiring race which has become somewhat representative of what F1 is nowadays. I just cannot get excited any more by a sport which I have followed to the point of obsession in the past.

It’s not the dominance by one team which is putting me off, as I still loved the sport during the Schumacher/Ferrari years. To be honest, I think it’s DRS which is the root of the issue.

In the past there was certainly less overtaking, but what a thrill when the move was finally made. It’s sickening to see aggressive, exciting drivers such as Raikkonen, Ricciardo and others left entirely defenceless by a system which makes overtaking a formality rather than an art.
Ben Needham (@Ben-n)

I hate DRS mostly because they make the activation zones too long (therefore creating freeway passes instead of chances to pass), but Barcelona has always been a parade. Unless is raining at Barcelona, the track is the ultimate poster child as a track ‘needing’ DRS.

For example, the 2008 race: Apart from the start of the race, only two passing manoeuvres were recorded: Heidfeld’s lap 55 pass on Fisichella and Coulthard’s lap 61 pass on Sato. That’s right, two passes in the entire race — a fresh tyres Red Bull pass on a final race Super Aguri and BMW (at its peak pace in F1) on a first-year Force India.
@Reg

Every race I feel myself falling more and more out of love with F1 and every time I see a race like today where DRS was too effective and we see a bunch of easy highway passes just speeds up that process.

I want to love F1, Its been my favourite category since the 1970s but I just really don’t like the gimmicks of the past few years and I find myself been drawn to things like the WEC, IndyCar and the GT categories like Blanchpain Endurance/Sprint series. Those series with no silly gimmicks like Pirelli tyres or DRS where there is a lot of real racing and real exciting hard-fought for overtaking are far more appealing now.
James-GPR FOM’s race direction and the quality of coverage from regional broadcasters was also a cause of some grief.

I’ve just moved from Australia to the US and had the misfortune to watch my first full weekend on NBCSN. Just horrible coverage. Pumped full of ads, cross promotions and anything else they can think of to avoid showing live coverage.
Tyler (@Tdog)

I liked the updated head rest cameras, I still don’t like the overlay ads, especially if a Toro Rosso rim keeps glitching the ad. On the subject there was no overlay message, yay.
Pennyroyal tea (@Peartree)

It wasn’t the best race recently but it made the championship more interesting, had a few good moves and some memorable moments. I just wish I could have seen it live on the BBC.
@Glynh

Did anyone notice how terrible the camera work and direction was? Seems whoever was cutting this was obsessed with close-up shots.(really irritating trend). Close-ups are the last thing you want especially at the start when any one who is actually interested in racing is trying to watch several battles at once.

What you need is wider shots so you can see what’s going on, not some close up following the leader round the corner so that you cant see what’s happening in context. Absolutely maddening! When yo do get some action the poor television coverage manages to miss what’s right in front of their faces.
Philc

67 comments on “Catalunya serves up another Spanish GP to forget”