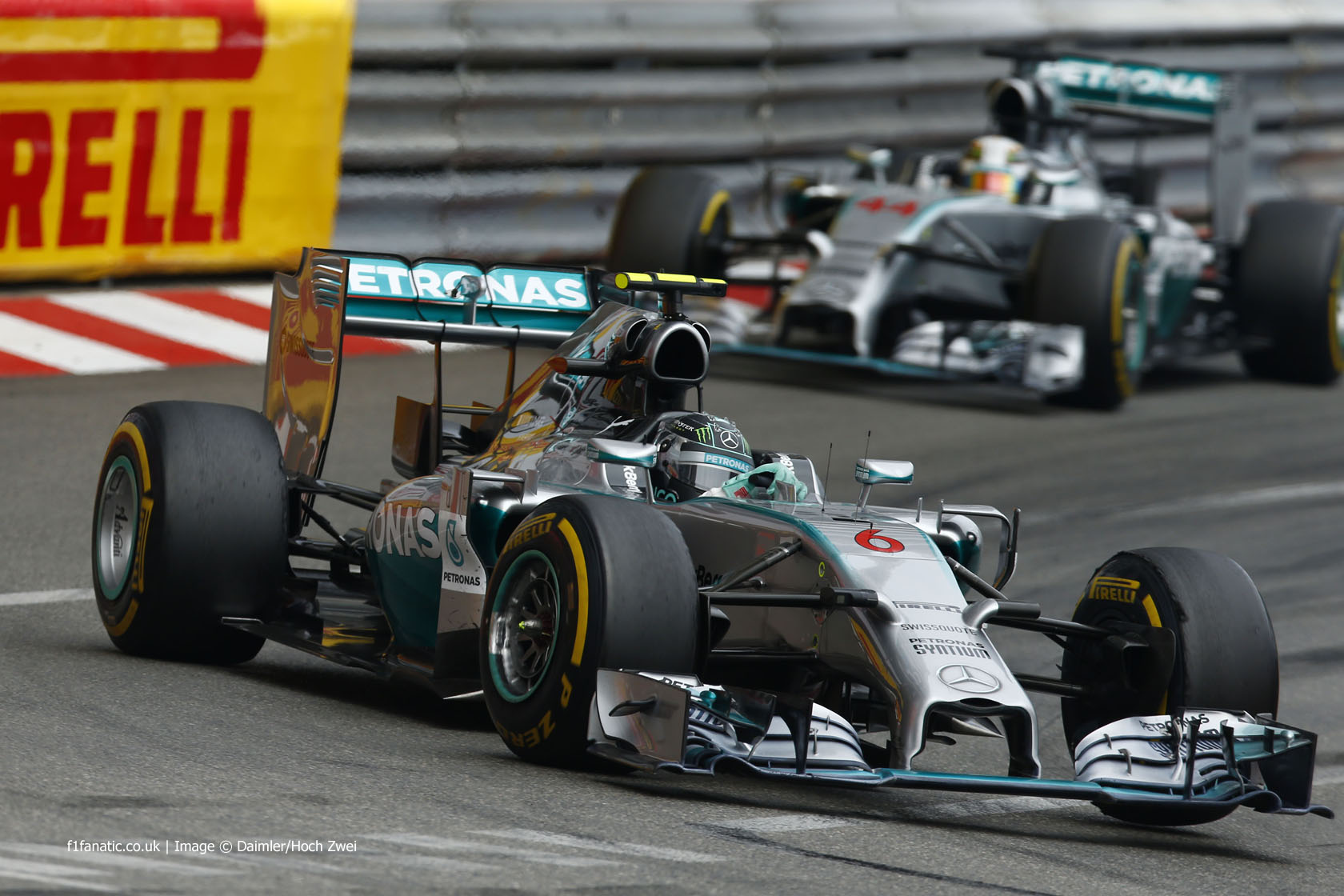 No driver has won the Monaco Grand Prix three times in a row since Ayrton Senna, the undisputed master of Monte-Carlo, scored five consecutive wins between 1989 and 1993.

Lewis Hamilton has made no secret of his desire to emulate Senna’s achievements. But since his sole Monaco victory seven years ago he hasn’t led a lap at the principality.

His Mercedes team mate Nico Rosberg, however, took victory in the last two Monaco Grands Prix – and it is he who has the chance to follow in Senna’s footsteps this weekend.

Despite pushing his team mate to the final round of the 2014 title battle, Rosberg had struggled to match Hamilton during the opening phase of this season. His first victory of this season in Spain came not a moment too soon and if he can continue his winning ways in Monaco it will put real momentum behind his championship bid.

But with Mercedes set to dominate proceedings around the fabled Monte Carlo streets once more, the potential for another duel between the two rivals is tantalising. Formula One arrives at one of its oldest and most traditional venues while headlines are dominated by the debate over the sport’s long-term future.

The tight, twisty Monte Carlo streets may have been the scene for many of the sport’s most famous triumphs, but races in Monaco are rarely unpredictable and regularly processional.

But that which makes Monaco such an ill-suited venue for F1 racing – slow speeds, zero run-off, unforgiving barriers and minimal overtaking opportunities – also sets it apart as one of the most unique and often enthralling races of the season.

Almost everything about the Monaco Grand Prix is different to a typical race weekend. Practice begins on Thursday, the race is only 260km long instead of the usual 305 and the trophy ceremony takes place in front of the royal box, rather than a podium.

The circuit itself may have evolved somewhat since the original races in the 1920s, but corners such as St Devote, the Grand Hotel Hairpin, Tabac and Rascasse provide the same challenge to today’s drivers that they did to all the greats of old.

With the slowest average lap speed by far of any circuit on the calendar, engines are rarely pushed to their limits around Monaco, with brake management the primary mechanical concern of the weekend.

The lower cornering speeds of Monaco mean that Pirelli have opted to debut their brand new super-soft compound tyres this weekend. F1’s official tyre supplier says it should heat up more quickly while being less susceptible to blistering. Often at Monaco what happens on Saturday afternoon is just as important as Sunday. The pole sitter has taken victory in ten out of the previous eleven races around the principality. Rosberg proved how vital the top spot on the grid is here last year by winning from pole for the second year in a row – albeit having taken the top spot under controversial circumstances.

This year minor revisions to the Swimming Pool section mean that the circuit is now three metres shorter in length than previous years, while extensive resurfacing of the Monte Carlo streets may provide drivers with increased grip compared to previous seasons.

The unforgiving barriers also mean that the chances of a Safety Car intervention are at their highest of any circuit aside from Singapore – which means the dynamic of the race could always change at a moment’s notice.

Lewis Hamilton’s contract extension has finally been completed, signed and formally announced. A second Monaco Grand Prix win would be the perfect way to celebrate.

The fact that engine power may not be as vital at Monaco compared to other circuits might not be of too much comfort to a Red Bull team who continue to struggle for overall performance, even compared to its sister junior team. Daniil Kvyat in particular will be seeking a strong result having faced criticism from Helmut Marko in the lead up to the weekend.

The jury’s out on whether Williams made genuine progress last time out in Spain or whether they were just flattered by a difficult weekend for Ferrari. Valtteri Bottas is certainly back at the top of his game, beating one of the red cars in each of the last two races, but an engine problem scuppered his Monaco race last year.

Ferrari arrive at Monaco with their best package in years, but they will still be heavily reliant on misfortune for Mercedes if they are to take their first Monaco Grand Prix victory for 14 years. But having taken victory in Malaysia thanks to a clever strategy call under a Safety Car and the high probability of a Safety Car intervention on Sunday, Ferrari could be able to spring another surprise if an opportunity presents itself.

Fernando Alonso is targeting McLaren’s first points finish of the season at Monaco this weekend. But to achieve that, the team must ensure that they are not struck again by the braking issues that took the Spaniard out of his home grand prix last time out in Spain.

Force India will need to focus on qualifying having had both cars eliminated from Q1 in Spain, but the team believe the softer compounds will suit their car.

Having raced at Monaco in Formula Renault 3.5 in 2013 and 2014, Carlos Sainz Jr has a key advantage this weekend over team mate Max Verstappen, who has never raced around the street circuit before. Both drivers will be hoping for a weekend free from reliability problems as they look to build on a points tally that doesn’t accurately reflect the performance of the STR10.

Following a difficult race in Spain, Lotus will be keen to add more to their points tally in Monaco with softer tyres that they believe suit their package. Having impressed at Monaco before, Pastor Maldonado is desperate need of a points finish this weekend after a tumultuous opening to the 2015 season.

Sauber began the season brightly in Australia but haven’t hit the same heights since then and the team’s drivers have drawn attention to the lack of updates on the C34 since then.

Monaco will no doubt be a difficult weekend for Manor as the team return to the circuit where they scored their first and only points in Formula 1 here last year but without Jules Bianchi to celebrate the achievement with them. “That was an incredible, unforgettable day and it is very important to everyone in the team that we honour what Jules achieved for us,” says Team Principal John Booth. The team will retain the Stevens-Merhi lineup for this weekend.

Are you going to the Monaco Grand Prix?

If you’re heading to Monaco for this weekend’s race, we want to hear from you.

Who do you think will be the team to beat in the Monaco Grand Prix? Have your say below.