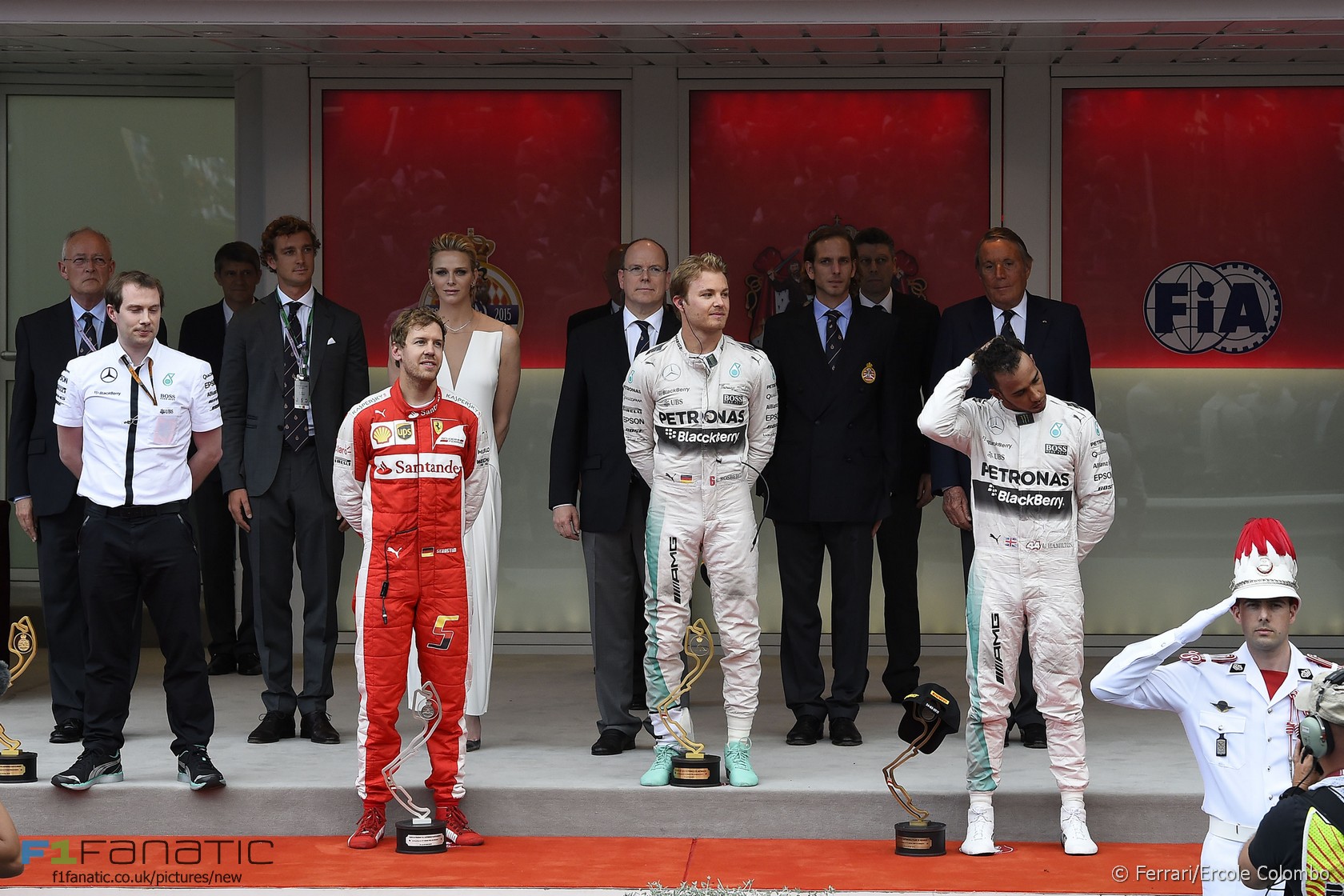 Should Mercedes have pitted Rosberg as well? Was it all a conspiracy? And how much less fuel do the new engines use?

Here’s the latest batch of answers to questions from F1 Fanatic readers.

What’s good for the goose… Why did only one Mercedes make a second pit stop in Monaco?

So I was wondering, if Mercedes were “covering Vettel” why they didn’t pit Rosberg as well as Hamilton?

After all he was running in second and would have potentially been under more threat from Vettel than Hamilton, if he had pitted? At first I thought the gap between Hamilton and Rosberg might not have been big enough to get one away in time for the other to be serviced, but I’m sure that the 21 seconds Mercedes believed they had would have been an adequate gap. Even the 19 seconds would have been enough time.
Richard Anderson

Actually, Mercedes needed quite a bit less time than that for Hamilton to make a pit stop and get out in front of Rosberg.

At Monaco teams need around 20 seconds for a pit stop in race conditions – this is the ‘pit window’ they refer to on the radio. But when the Safety Car is out they need less time because the cars are passing by more slowly. Toto Wolff said last week that the ‘Safety Car pit window’ time at Monaco was only 12 seconds.

However in the case of Rosberg before the Safety Car appeared he had Vettel 1.7 seconds behind him, who in turn was 11.5 seconds ahead of Daniil Kvyat. Neither Rosberg nor Vettel had a ‘Safety Car window’ over the next driver behind them.

Moreover, had Rosberg entered the pits, Vettel would have seen him do so and could have chosen to stay out, inherit Rosberg’s track position, and hope his tyres would hold out until the end. This would surely have been a far more attractive option for Vettel than pitting in the expectation he would fall behind Kvyat.

Mercedes’ Monaco mishap has attracted more questions than any other recently, several of which have been addressed in earlier articles: Was there a nefarious purpose behind Hamilton’s pit stop?

Do you believe that Mercedes are favouring Rosberg?
Paul Weatherley

No. Mercedes has just signed Hamilton to a new three-year deal which some estimate costs them as much as £100 million. What possible business case could there be for doing that and then sabotaging him?

The conspiracy theories are tired and predictable. Last year a hue and cry went up whenever some people believed Hamilton had been disadvantaged by Mercedes: a fractionally slower pit stop than Rosberg, a slightly less reliable car. Hamilton’s decision to re-sign for them is the best proof you could ask for that nothing underhand is going on.

A team of that quality and professionalism do not make errors of judgement as they did or do they?
Paul Weatherley

Yes they do. They’ve explained as much, all the data corroborates it, the radio messages show Hamilton contributed to the decision and it’s not as if they haven’t made other mistakes before.

Mercedes want a German in a German car to win this time round, don’t they?
Paul Weatherley

That’s a considerable oversimplification. Mercedes may be German-owned but the team including the chassis and engine operation is based in Britain, they are run by an Austrian (Toto Wolff), a Briton (Paddy Lowe) and another Austrian (Niki Lauda), and their chief strategist is British (James Vowles). Nico Rosberg grew up in Monaco, has a Finnish father and a German mother, and only exchanged his Finnish racing licence for a German one in the hope it would get him more sponsors.

And none of that really matters.

I don’t understand the eagerness to reduce other people’s motivations to simplistic nationalism when F1 is replete with example of multinational teams achieving great success. What about the Brazilian winning championships in a British car with a Japanese engine designed by a South African? Or the German who enjoyed even greater success with Italy’s greatest team on Japanese tyres masterminded by a Briton? And that just scratches the surface. it would be interesting to know the difference in fuel usage In comparison of the normal V8’s and the hybrids. In terms of quantity used.
Jeff Silva

As of last year teams are limited to using no more than 100kg of fuel per race, which is around 133 litres. Although the figure will vary from team to team, this is approximately 30% less than what they used during the V8 era, so a reduction of around 42kg/56l.

However even last year some teams were not using the maximum 100kg allowed at some races, such as Monaco where the race distance is shorter and drivers are at full throttle so little. The following data from Williams gives an indication how much more frugal the current engines are:

The data above shows the current engines now use around 33% less fuel than the V8s. The new engines may be more frugal, but is there any chance of going back to the old ones?

There’s a lot of talks of the V8 engines returning, but will they return? If so when would this happen?
Lewis Stevenson

At present there is no plan to replace the current V6 turbos with the old V8, despite the likes of Bernie Ecclestone and Christian Horner lobbying for such a move.

The last meeting of F1’s Strategy Group agreed that, regarding engines, the “stability of the rules should prevail in consideration of the investments of the manufacturers involved in the sport and to give visibility to potential new entrants”.

The F1 Fanatic Points Calculator is a popular feature of the site and here’s a suggestion to make it even better:

Can we see a Points Calculator add-on, which would allow us to compare the driver’s championship results from previous years, too?
Keisoglou Alexandros

I like this idea a lot and it’s on the ‘to do’ list for an upcoming version of the Points Calculator. In the meantime you can have a play with the current version here:

All around the world

Good news for those of you playing the Predictions Championship:

Do you guys ship the Predictions Championship prizes around the world?
Erik Neary

Yes we do – including the mega first place prize worth over £1,600 – so get your entry for the Canadian Grand Prix in now:

The policy varies from track to track but you’ll usually find this is the case. To check what the arrangement is at the race you’re planning to go to you can ask other fans who’ve been before via the forum:

64 comments on “Why didn’t Rosberg pit? More of your F1 questions”