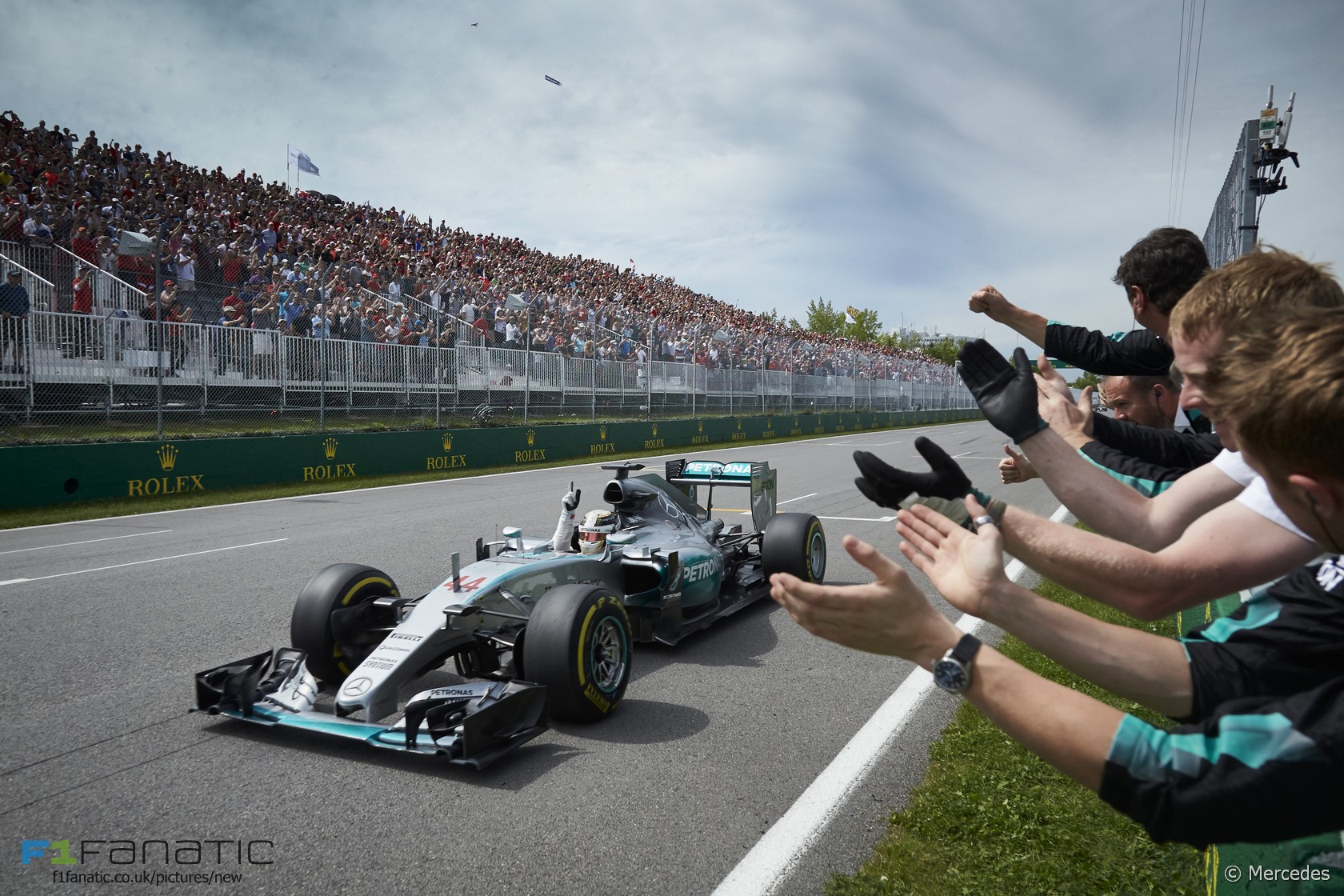 After the astonishing conclusion to the Monaco Grand Prix – which dominated the discussion in the lead-up to the Canadian round – normal service was very much resumed on the Isle Notre Dame.

Lewis Hamilton may have rarely had much more than a second in hand over Nico Rosberg for much of the race, yet his team mate never presented a credible threat. Hamilton himself said as much after picking up his fourth winners’ trophy of 2015. Twelve months ago Rosberg had started from pole position and firmly closed off Hamilton’s advance at the start. The positions were reversed this year, but Rosberg didn’t get away well enough for Hamilton to feel the need to put manners on him at turn one.

The opening corners were an orderly affair: the top five drivers held their places, then Nico Hulkenberg lunged into sixth place at Pastor Maldonado’s expense on the outside of turn three.

Nearer the rear of the field, Sebastian Vettel was disappointed by his lack of early progress having lined up 18th on the grid. “In the opening laps I was not very happy with myself,” he said.

“I was very aggressive but I could not find the gaps, I wanted to go crazy but there was no room, so I had to be patient and it’s a shame because these are the moments when if you are lucky you can gain easily five, six , seven or eight seconds in total race time.”

By lap seven he was part of a three-car battle for 11th behind Marcus Ericsson and Felipe Massa. Ferrari opted to bring Vettel in and switch him to the soft tyre compound, but were slow dropping him off the jacks, losing at least three seconds. He was now dead last. The two Mercedes drivers had been separated by just 12 thousandths of a second on their super-soft tyre runs in Q2. But reacquainted with the same rubber in the race, Hamilton now had a clear performance margin, and progressively grew his lead over Rosberg. After 19 laps he had a healthy advantage of nearly four seconds.

The pursuing Kimi Raikkonen and Valtteri Bottas had dropped back at a similar rate in a race which was shaped by the high fuel demands of the Circuit Gilles Villeneuve.

The scintillating race at the track 12 months ago had featured an early Safety Car period which let drivers off the hook as far as saving fuel was concerned. But unusually for Montreal, this race ran green from lights to flag. The need to watch the fuel allocation therefore weighed heavily on the minds of strategists, who in turn ordered their drivers to ‘lift and coast’.

The McLaren drivers, struggling with a shortage of top-end power and poor fuel economy, were dismayed by how frequently they had to back off. “You would not believe how early I am lifting off,” Jenson Button exclaimed at one point.

Like Button, Fernando Alonso preferred to enjoy the brief amount of time he could spend racing other cars before worrying about fuel saving later. He was already being passed with ease by anyone who cruised up in his mirrors, though he pushed Vettel to the limit when his Ferrari successor went wheel-to-wheel with him at the final chicane on lap 19. Hamilton’s advantage over Rosberg all but vanished during the course of their pit stops. Rosberg enjoyed the quickest pit stop of the race, but Hamilton’s was just three tenths of a second slower. Rosberg made his gains with a rapid lap prior to his pit stop and thanks to a slow lap from Hamilton shortly after he changed tyres.

Now little more than a second behind his team mate, Rosberg was able to get the fuel numbers working in his favour.

“I think because Nico was in my tow he was able to save more fuel,” Hamilton explained afterwards. “Naturally when you’re behind someone you use less fuel.”

Rosberg’s superior fuel economy threatened to give him access to more power at the end of the race. “I thought I had saved enough but I needed to save some more, so through that period I was just fuel-saving,” Hamilton continued.

The race leader had one eye on the fuel gauge, and another on his mirror to check the number six Mercedes did not suddenly appear within his DRS window. “I was saving a lot of fuel,” said Hamlton, “and then once I’d saved enough, I was able to get on it a little bit more”.

Rosberg – who at one point was warned his brakes were in “critical” condition due to running in the hot air of the other W06 – was eager for information on the state of Hamilton’s fuel consumption. As on previous occasions this year, his team had to tell him they couldn’t answer his questions about the other car.

“I wasn’t to know if Lewis would run into trouble at the end of the race or not,” said Rosberg later, “because that could help me judge how much fuel I would need to save at that point in time and when I should try and put the pressure on.”

“But unfortunately that’s been banned, to give that information, so I wasn’t able to get that,” he said, “which is a pity because it would have helped me judge, maybe put on a better attack if I had that information.”

This snuffed out what small chance there was of a battle for the lead emerging. But behind them the occupant of the other podium step had changed. In a puzzling repeat of last year’s race, Raikkonen had spun his Ferrari at the exit of the hairpin at the far end of the track. He was mystified by the car’s behaviour, which he attributed to a sudden surge of power, and which cost him third place to Valtteri Bottas.

Team principal Maurizio Arrivabene said they didn’t understand what had caused it. “It may be a case of contributory negligence as he said the same thing happened last year,” Arrivebene remarked, noting also that another unspecified issue had delayed Raikkonen later in the race.

That would go some way towards explaining how Vettel was able to gain on him in the latter stages of the race. Having caught Massa once more his second pit stop allowed him to easily jump ahead of the Williams once Massa finally made his single visit to the Williams garage.

Like several of his rivals, Vettel found the track’s generous DRS zones made for straightforward overtaking. However his attempt to pass Hulkenberg nearly wiped out the pair of them – the Force India driver spun but managed not to collect the Ferrari. Vettel then demoted Maldonado for fifth, and so having started 15 places behind Raikkonen he crossed the finishing line as the next car behind his team mate.

He would have had to fight Romain Grosjean for the place, but the Lotus driver lost the place with a clumsy mistake while lapping Will Stevens. After reviewing the video Grosjean admitted he’d been at fault.

Despite a five-second penalty, Grosjean held on to the final points-paying position behind Massa, who recovered to sixth, Maldonado, Hulkenberg and Daniil Kvyat’s Red Bull – the only Renault-powered car in the top ten at a track where their shortcomings were plain for all to see. An undramatic run to victory was just what Hamilton needed after the aggravation of Monaco and a problematic build-up to the race.

However it does not bode well for the rest of the season that even the Circuit Gilles Villeneuve, a venue which can normally be relied upon to throw a few curveballs at the drivers, failed to generate much excitement in the race.

Rosberg’s wins in Spain and Monaco might have generated the kind of momentum he built up at mid-season last year. But Hamilton’s victory arrested the trend before it had really begun.