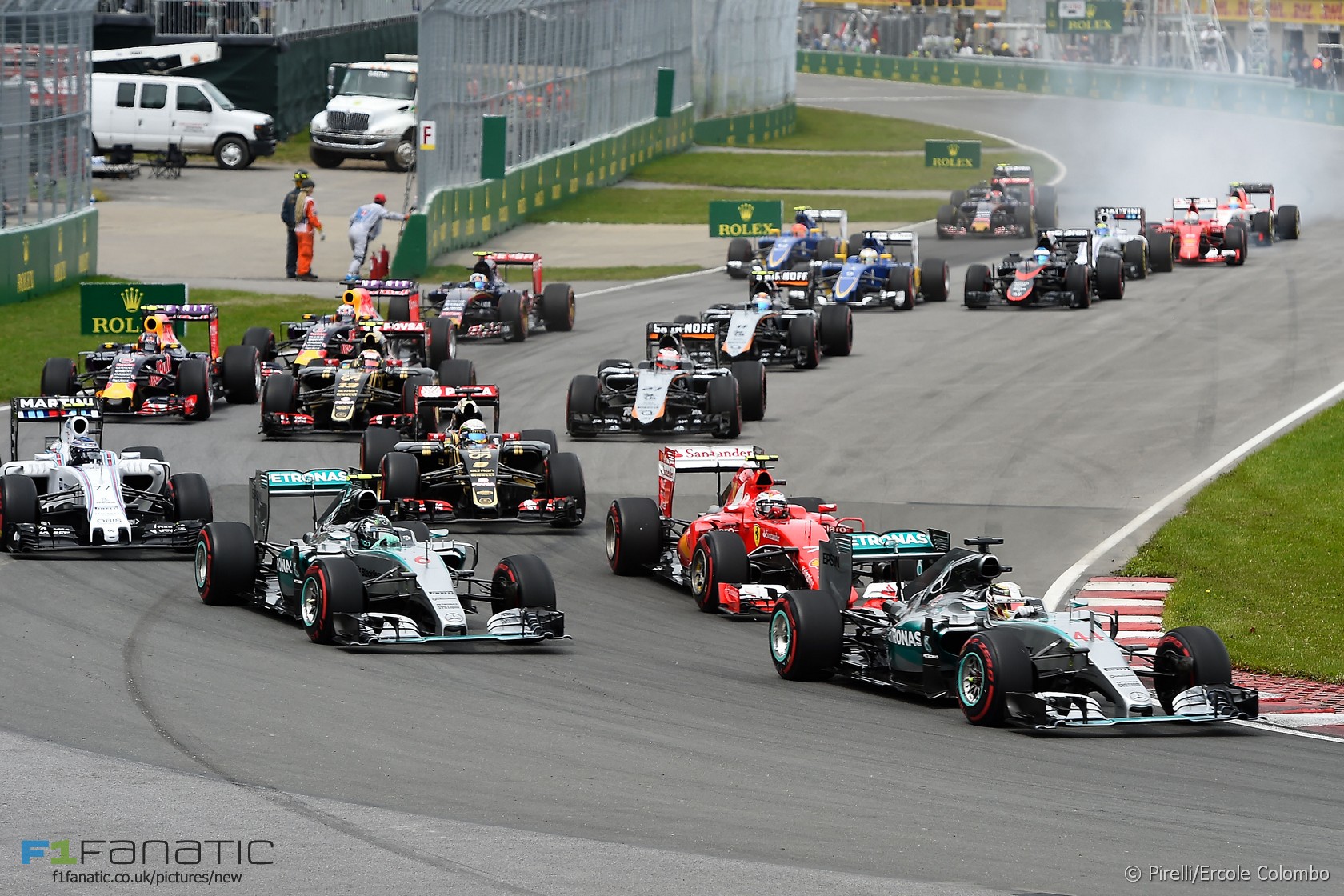 Lewis Hamilton – Despite topping both sessions on Friday he had a scruffy start to the weekend – a spin in first practice, a bizarre crash in the second, and in the third he was last after failing to get a clean lap in before the red flags started to fly. Rosberg ran him close in qualifying but Hamilton prevailed by a comfortable margin. He pulled clear in the first stint but Rosberg kept him honest after they switched to softs, the gap rarely more than two seconds. Even so, a fourth win for Hamilton never really looked in doubt.

Nico Rosberg – Pole position was within his grasp but he had the misfortune to be allocated a duff set of tyres for one of his runs in Q3. Although eager not to appear to be making “excuses”, Rosberg said the inferior set left him short of grip, and he lined up second. He pressed Hamilton hard in the second half of the race, despite his brakes reaching a “critical” state at one stage, but had to settle for the runner-up spot.

Daniel Ricciardo – Last year’s winner was downcast after only managing ninth on the grid behind his team mate at a track where Red Bull’s greatest weakness was exposed. He slipped out of the points in the race and was at a loss to understand why. “We just couldn’t get any pace out of the car,” he said. “It is something we will look at to understand what the cause was.”

Daniil Kvyat – Out-qualified Ricciardo for the second time since they became team mates. Realistically he was never going to be able to keep Massa and Vettel behind in the race, but he had to keep his foot down to stay ahead of the recovering Grosjean. Felipe Massa – A problem with Massa’s turbocharger robbed him of power in qualifying and consigned him to a 15th-placed start. Some well-worked passes helped him make up ground, including a superb side-by-side dice with Ericsson, as did the race’s longest stint on the super-soft tyres – 33 laps. He capped a fine damage limitation run by taking sixth place off Maldonado.

Valtteri Bottas – Delivered under pressure at the end of Q3 to move ahead of both Lotus drivers for fourth place – and he was less than a tenth off Raikkonen. “That was as quick as the thing goes,” he said on his way back to the pits. Although he couldn’t keep pace with Raikkonen in the race he was quick enough to take advantage of his rival’s spin at the chicane. So for the third time this year he came home ahead of a Ferrari – and this time it earned him a podium finish. Sebastian Vettel – Power unit trouble was an inconvenience in practice – and a major problem in qualifying, where it put him out in Q1. Then it transpired he had overtaken Merhi under red flags in practice, incurring a five-place penalty which left him 18th. Made an early pit stop at the end of lap seven but a slow tyre change cost him more time, as did a contretemps with Alonso at the chicane. But he kept picking off his rivals and strong pace after his second pit stop brought him up to fifth place behind his team mate.

Kimi Raikkonen – With Vettel sidelined, Ferrari needed Raikkonen to deliver in qualifying and this time he did, netting a useful third. However a spin after his pit stop allowed Bottas to jump him for third place, and after aggressively spinning his tyres up he had to pit for a new set. Fortunately no one else was close enough to take advantage. He pitted for a fresh set of tyres but couldn’t catch the Williams – afterwards Maurizio Arrivabene suggested Raikkonen was managing some other problem at this stage.

Fernando Alonso – Missed most of final practice while his power unit was changed, but despite the Honda’s lack of power he got into Q2 where he claimed 13th on the grid. However he lost places to several rivals early on and was clearly unhappy when told he needed to save fuel. Capping his misery, the car failed soon afterwards.

Jenson Button – A power unit failure at the end of final practice meant Button was a spectator in qualifying, much as he was in Bahrain. He also had to serve a drive-through penalty after changing power unit components, and just as he was relishing the prospect of bolting on super-softs for a late push, his car broke down too. An abject weekend for McLaren. Nico Hulkenberg – Equalled the team’s best qualifying result with seventh, at a track where Force India’s Mercedes engine neutralised some of their usual disadvantage. A late-braking move at turn three got him ahead of Maldonado at the start, but a much earlier pit stop for the Lotus driver got him back ahead. Hulkenbreg then spun while trying to defend seventh place from Vettel. “I probably shouldn’t have tried so hard to defend against Seb,” he admitted, “but when you’re a racer you just don’t want to give up a position without a fight.” That scuppered any chance of catching Maldonado at the end, and he finished eighth.

Sergio Perez – If he’d been able to replicate his Q2 lap time in Q3 he’d have started eighth on the grid behind his team mate, but struggled to generate tyre temperature on his out lap. Tyre, brake and fuel-saving was the story of the latter part of Perez’s race. He finished eleventh, and Force India’s effort to get another penalty for Grosjean so their man would inherit tenth came to naught.

Max Verstappen – Arrived in Montreal with a five-place grid penalty from Monaco, then copped another ten-place penalty for an engine change, which turned into a ten-second penalty in the race when it couldn’t be applied in full. He made it into the points places by staying out late, but the inevitable penalty dropped him out of contention again.

Carlos Sainz Jnr – The Circuit Gilles Villeneuve was new to both Toro Rosso drivers and Sainz prevailed in qualifying to the tune of two tenths of a second. He got ahead of Ricciardo for 12th, but the day was always going to offer little for the Renault-powered cars. “With all the fuel saving and lift-off we had to do, it was very difficult out there,” Sainz reflected. Romain Grosjean – Lotus were quick from the word go in Canada and Grosjean could even afford to feel slightly disappointed with fifth on the grid. He said his out-lap preparation had been compromised after Lotus sent both cars out of the pits simultaneously for their final runs. He was on course to deliver fifth place in the race when he tripped over Stevens’ Manor while lapping his rival, picking up a puncture. That dropped him to tenth, which he held despite his five-second time penalty. To his credit, having blamed Stevens initially for the contact Grosjean later accepted responsibility.

Pastor Maldonado – Backed up Grosjean in sixth despite a spin early in qualifying. Having lost a place to Hulkenberg at the start he pitted early and ran the longest stint of any driver – 53 laps on the soft rubber – to take his first points of the season for seventh.

Marcus Ericsson – Sauber did have the benefit of Ferrari’s engine upgrade in Canada. Ericsson blamed traffic for not qualifying better but still came out ahead of his team mate. He ran to a lowly 14th, then had to park up immediately after the chequered flag with a fuel system problem.

Felipe Nasr – A nasty-looking crash in final practice was blamed on Nasr hitting the DRS button while he was weaving to warm his tyres up. Mercifully only his pride and car were damaged. Suffered a lack of power from the start of the race and had to cope with overheating brakes as well.

Will Stevens – Said he was a little less comfortable with his car than usual after being pipped by Merhi in qualifying. Was running behind his team mate at the time of his collision with Grosjean. “I left him so much room,” said Stevens. “It was an unnecessary accident.”

Roberto Merhi – Beat Stevens in qualifying for the first time this year by little more than two-hundredths of a second, and was on course to lead him home in the race until a driveshaft fault put him out.

Who was the best driver of the 2015 Canadian Grand Prix weekend?