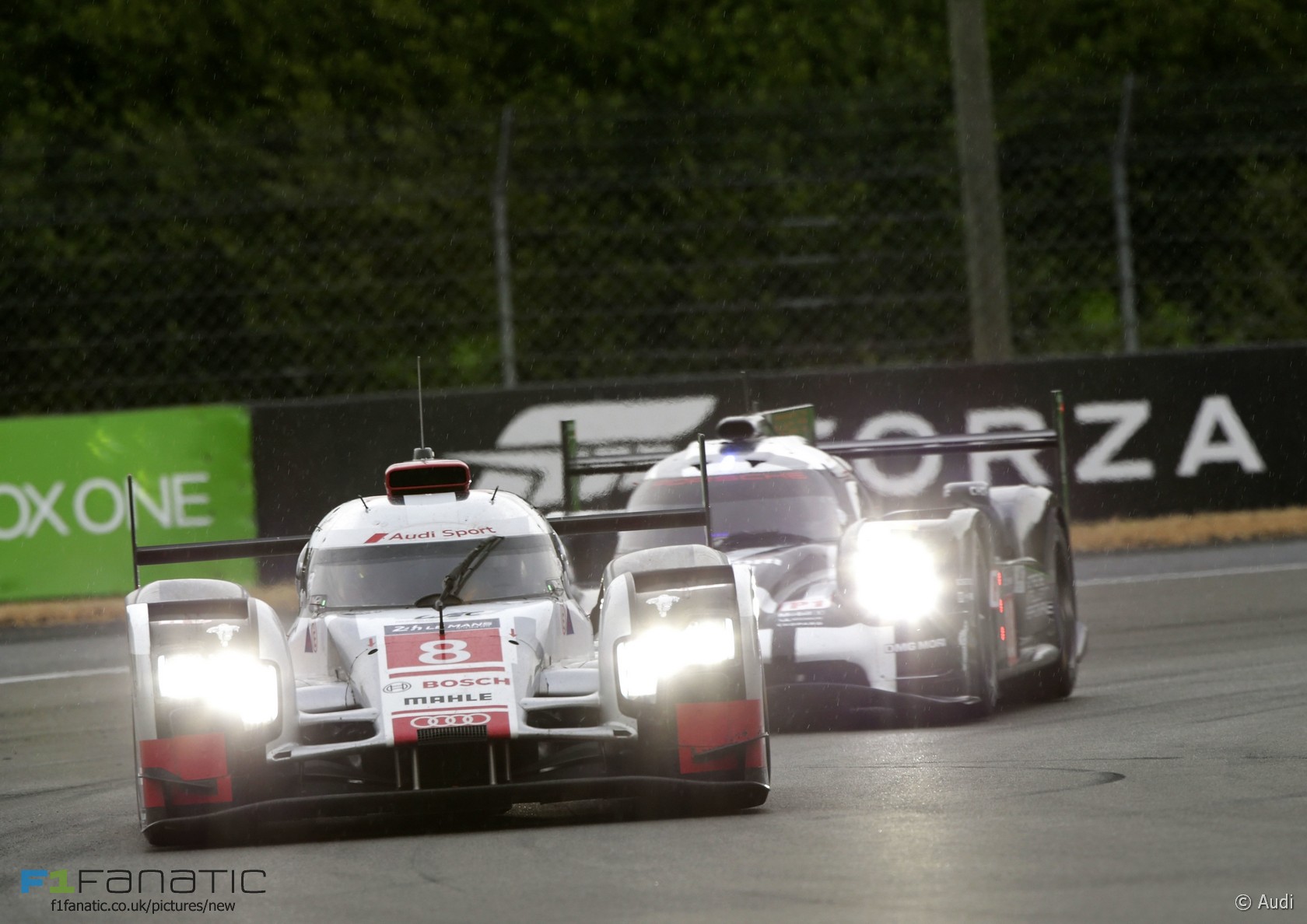 Fernando Alonso may be directing a few jealous glances in the direction of the La Sarthe circuit this weekend.

Twelve months ago he waved the flag at the start of the Le Mans 24 Hours. According to reports earlier this year, he subsequently tried to land a place in Porsche’s driver line-up for this year’s race, but was prevented from doing so by Honda.

While debate rages about the merits of today’s fuel-sipping, tyre-nursing Formula One, Alonso is far from the only recent driver to find the WEC an alluring prospect. For the first time in six years an active Formula One racing driver – Nico Hulkenberg – features on the grid.

He is at the wheel of one of the Porsches Alonso might have driven, as is fellow WEC convert Mark Webber. And the build-up to the race has indicated the German manufacturer may have a race-winner on their hands.

Porsche returned to Le Mans last year still as the most successful constructor in the history of the race, having taken 16 victories between 1970 and 1998. But two years after its last victory Audi took its first – and has piled them up at an astonishing rate since then.

Heading into the 2015 edition of the world’s greatest endurance race, Audi has won the last five in a row and amassed a total of 13 wins in just 15 years. But they and Porsche have faced each other relatively infrequently on the track.

This year will be another chance to savour the fierce rivalry between the Volkswagen Group stablemates: a competition which appears to have propelled them beyond the reach of their LMP1 rivals. In qualifying the trio of Porsche 919s seized the top three places on the grid. Neel Jani lopped the best part of five seconds off last year’s pole position time. The three Audis will line up next followed by the Toyotas.

The Japanese marque may have won the World Endurance Championship with their TS040 last year but Le Mans success continues to elude them. Their German rivals have clearly surpassed them in outright performance since the season began.

The updated TS040s ended qualifying over six-and-a-half seconds off the flying 919s, and their best chance in the race appears to be playing the ‘tortoise’ to the Germans ‘hares’. They are outgunned in numbers as well – just two Toyotas will go up against three cars each from Porsche and Audi.

But Toyota’s trials are nothing compared to that of fellow Japanese manufacturer Nissan, which is making its return to the top category at Le Mans for the first time since 1999. Comparing their plight to Honda’s in F1 would do McLaren’s engine partner a disservice: Nissan’s LMP1 contender was over 20 seconds off the pace in qualifying, more than 10% slower than the Porsches, and one of them will start behind the LMP2 pole sitter.

This was far from unexpected. Nissan’s American arm, which is running the project, has been beset by problems while preparing the GT-R LM NISMO for its La Sarthe bow. Undeterred by the setbacks encountered with their radical ZEOD RC last year, which completed just five laps, Nissan designer Ben Bowlby has produced another unconventional machine, albeit one which satisfies the LMP1 rulebook. Technological diversity is a great strength of the WEC. Audi, Porsche and Toyota all have significantly different power trains. But Nissan’s car is a paradigm shift: front-engined and front-wheel-drive, its layout is intended to maximise the potential of its hybrid powertrain and take maximum advantage of the limited aerodynamic freedom offered by the rules.

However the car was not ready in time for the first two WEC races, and is running without its full complement of hybrid propulsion systems. Nonetheless Nissan has shown up with three of them, and painted one in the colours of the R90CK which set pole position in Mark Blundell’s hands 25 years ago. Even so their 2015 participation is likely to be more a case of preparing for their 2016 return with what they hope will be a much more competitive car.

Nissan’s comeback has boosted the LMP1 contingent to 14, and the LMP2 field remains healthy with 19 cars. The rest of the 56-cars field is made up by GT entrants, including works Ferrari, Corvette and Aston Martin entries, though the professional class numbers just eight following the withdrawal of of the number 63 Corvette due to Jan Magnussen’s crash in qualifying.

As always a myriad of different storylines will play out over a race the duration of which is more than twice what the F1 field has spent racing so far this year. But as always it will be the fight at the front which commands the greatest attention. The chance to see the two most successful teams in the history of the sport duke it out for victory is not to be missed.

NB. Christian Klien is in the line-up of one of the reserve cars, the #49 KCMG ORECA-Judd 03R LMP2 entry.

How to watch the Le Mans 24 Hours

In the UK, Eurosport is broadcasting the entire race live from start to finish, mostly on Eurosport 1 and occasionally switching to their second channel. The programme begins at 1:15pm and the race starts at 2pm.

As usual we’ll be following the whole thing on F1 Fanatic Live so join us from half an hour before the start of the race.

Will Toyota or Porsche finally break Audi’s grip on Le Mans? And can Nissan meet their goal of getting a car to the chequered flag?

Who has caught your eye in the other classes? And are you crazy enough to try to stay awake from start to finish?