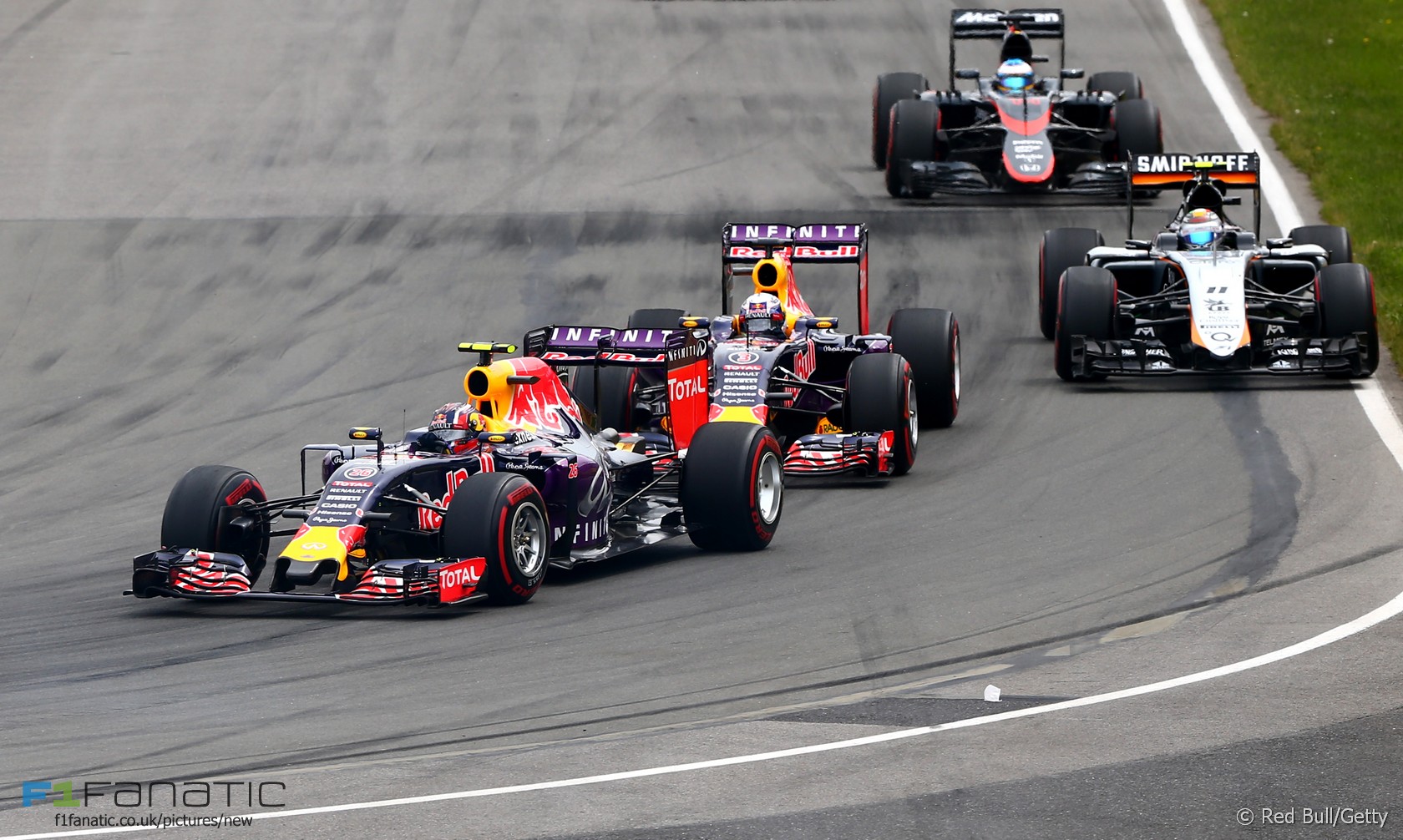 No other circuit reliably produces entertaining races like the home of the Canadian Grand Prix. But the Circuit Gilles Villeneuve failed to produce the goods this time.

The previous six races in Montreal had averaged a rating of 8.2 out of ten from F1 Fanatic readers – higher than any other track. But the 2015 edition merited a mere 5.5 out of ten.

Various theories were put forward for why it failed to produce the goods. But many singled out the apparent ease with which some drivers were able to overtake.

A substantial number of your responses to the race pointed the finger at F1’s Drag Reduction System for making overtaking too easy:

Well that was boring. There were some interesting bits, like watching Massa and Vettel come through the field and Rosberg trying to catch Hamilton. However, the former was pretty much spoiled by DRS (it was always a question of “when”, not “if”) and the latter fight never really materialised, as Hamilton just managed to always keep the gap at around 1.3 seconds.
@Kaiie

What makes it worse is this is the one track that always delivers good races. Doesn’t make me feel to much excitement for the rest of the year. DRS has taken all the tension and excitement out of battles for position. I turned off after 20 laps. One out of ten.
Broom (@Brum55)

For me the biggest turn off are those DRS passes. I don’t mind races being processional from time to time and the lift and coast doesn’t really bother me that much because I believe that it was always a part of F1 racing but we weren’t aware of that before but I just can’t stand DRS passes. I would rather have races without DRS in which we see fewer overtakes because I prefer quality over quantity. Every time there is a potential battle for positions I hope to see a real fight but most of the times I’m left disappointed. And that’s what ruined today’s race for me, too powerful DRS.
Kashi (@Kashi13)

I’m not the biggest fan of DRS (I hate it just as much as a lot of others) but I feel it needs to be mentioned that most of the real easy passes were more a result of the Renault’s/Honda’s having really bad straght line speed.

When we saw Mercedes and Ferrari powered cars racing DRS didn’t make things that easy at all.
@Gt-racer While those who thought highly of the race were in the minority, some of them were puzzled by the negative response which came from others.

Watching Vettel climb up the pack from essentially last place to finish well within the points at 5th even after a slow stop was brilliant. Masa got to work as well which was lovely to watch… and Maldonado actually finishing a race? In the points no less.. Lotus must be ecstatic having two drivers actually finish in paying positions.

The action up front was less enthralling, of course, but overall there were some great moments.
Michael Baumert (@Nothingreal)

I am getting so brassed off at the constant stream of negative comments from so called F1 fans these days. I’m sorry, but if you felt that race was boring, I have to question why you watch the sport or indeed if you understand it. That was a fine race, a classic no but it had its moments and it had a number of good sub-plots that played out well. If you cant see that it is your loss and you should look elsewhere.
@GeeMac

Plenty of racing in the midfield and watching Massa and Vettel move through the field for fifth and sixth was fun. A more enjoyable race to watch then most of the others despite no battle for the win.
Corey (@Dragon86) However the lack of tension in recent races has led many to conclude F1 has fundamental problems at the moment:

It’s all so routine nowadays. Reliability is spotless for all top teams. Mercedes is quicker than the others, so they qualify ahead of the rest, drive away from the field and finish one-two. Hamilton is quicker than Rosberg, so he qualifies ahead of him and then manages the gap just enough so that he finishes ahead of Rosberg, the gap being comfortable but not too big. Just lift and coast it home, Lewis.

But then there was the fight for P3. Raikkonen spun at the hairpin, falls behind Bottas and pits for different tyres. Will he take P3? No, because the Williams engineer told Bottas over the radio they calculated it was not going to happen.

Vettel and Massa qualify right at the back. Will they make up ground during the race and make it into the top six? Well, yes, of course, I mean, they have DRS so they can quickly cut their way through the field. All the pre-race excitement of two top cars out of position, all vaporised after about twenty laps.

IS there going to be a safety car then? Not very likely, because none of the driver are actually pushing – you have to be pretty unfocused to make a mistake. Just make the DRS passes and get the car home, guys.
@Andae23

People say fans ‘forget how boring it used to be’, but at least it was pure. If a driver couldn’t pass another, that was that. If he did manage it, the manoeuvre was completely down to driver skill, or good fortune. It wasn’t due to DRS, fuel saving, or driving over a car park outside of the white lines to avoid a collision.

It was a spectacle back then. I didn’t mind a procession in the mid-00s, because it was mesmerising. Races were entertaining enough just watching the cars screaming around the circuit. These cars are a dull as dishwater to watch. The old Hockenheim used to absolutely thrill me as a young boy.

I am waiting for DRS to be rid of. It needs to be written into the 2017 regulations, otherwise my twenty-something years of interest will likely evaporate entirely. I’m tired of persevering with this sub-par formula, waiting for things to be addressed that seemingly never will be. I spent half of Montreal tapping away on my laptop with the race in the background. I doubt I’m not the only viewer to whom an F1 race is now just wallpaper to casually glance at.
@Newfangled

I, like some others on here, fell asleep at about lap 24. I know this because that is where my lap chart fizzled out. (Justification, if any were needed that a hideously expensive Sky Sports package would be a waste of my precious pennies). People are claiming that F1 is boring and I would have to agree with that. The FIA have to take the blame for most of the problems and really put their foot in it when they decided to take charge of the design the cars for 2014. For overstepping the boundaries of it’s expertise the FIA were suitably punished by the car makers ‘with knobs on’.

I have been watching, avidly, since the 70’s. The ‘show’ is now so predictable that we all know that the 2015 world champion will be Lewis Hamilton, Mercedes will win the 2015 constructors championship and Bernie will get even richer.

What is missing from the ‘sport’ is unpredictability. Exploding engines, melting gearboxes, smoking tyres, red hot brake discs et. al. F1 racing should be proper racing. Fill it with fuel, put four new tyres on it and go (very noisily) like hell from the start until you either win or you break something and retire.
@Lotus49

This was the fourth race in a row which scored less than six out of ten. Surely we’re due a change for the better in the near future?

2015 has been a bit of a dull affair so far, but don’t lose faith, people. Fingers crossed for better races to come. F1 will get better.
@Deej92