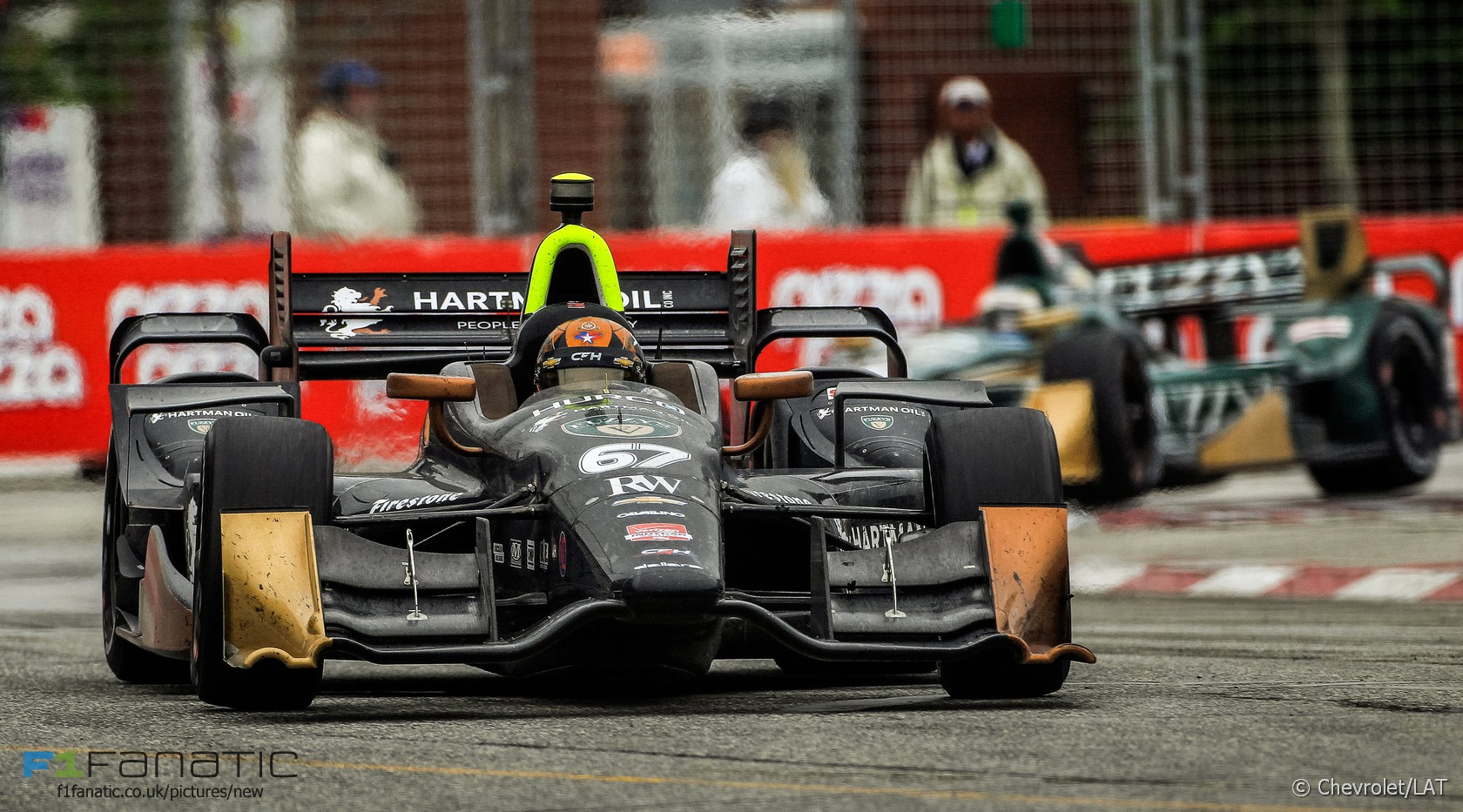 A rookie defeated the championship rivals in Formula Renault 3.5, an underdog team took a one-two in IndyCar, and an unfamiliar face snatched an emotionally second place in the World Rally Championship.

Catch up on an exciting weekend of racing below.

Porsche claimed victory at Le Mans in the second year of their comeback to the World Endurance Championship. All three of their cars saw the chequered flag – as did the Audi trio and Porsche duo – and the lead 919’s victory was down to a largely error-free and very quick run by drivers Nico Hulkenberg, Earl Bamber and Nick Tandy. The latter was the only one of the three with any prior Le Mans experience, and all were new to the prototype class.

The KCMG Oreca of Matt Howson, Richard Bradley and Nicolas Lapierre took honours in LMP2 where three cars finished on the lead lap after a full day’s racing. Despite losing one car in qualifying when Jan Magnussen crashed, Chevrolet bounced back to the GTE Pro class after mechanical trouble struck several of their rivals. GTE Am was won by the Ferrari 458 Italia of Victor Shaytar, Andrea Bertolini and Aleksey Basov after the leading Aston Martin was crashed by amateur driver Paul Dalla Lana.

Race one at the Hungaroring was one to savour as rookie Egor Orudzhev resisted the race-long attention of championship leaders Oliver Rowland and Mathieu Vaxiviere plus F1’s Roberto Merhi, who finally had a good weekend in the Pons car. Pole sitter Vaxiviere started poorly, then sustained front wing damage while taking third place off Nicholas Latifi.

Vaxiviere closed onto the scrapping Orudzhev and Rowland, but Merhi slipped by into third late in the race. The Manor racer then took second off Rowland at the final turn of the race as the Fortec driver made a late bid to pass Orudzhev. When the dust settled few seemed to have missed the mandatory low-downforce configuration which was scrapped ahead of the weekend.

The second race was a tense affair, Rowland enduring fierce pressure from Vaxiviere having made the start of the year to grab the lead from fifth on the grid. He made his compulsory pit stop one lap later than his pursuer but stayed ahead, despite Vaxiviere drawing alongside at one stage. Rowland’s win was confirmed after he was cleared of speeding under yellow flags following a stewards’ investigation, and he is now 16 points ahead of Vaxiviere at the top of the table.

Yet another rain-affected IndyCar race was won by Josef Newgarden, who led CFH team mate Luca Filippi in a one-two for the IndyCar underdogs. Helio Castroneves took a fortuitous third place after a mid-race strategy gamble, while behind him the action was intense.

NASCAR couldn’t escape the rain either. The red flags flew four times at Michigan due to precipitation, and the race was eventually abandoned well short of full distance.

Had the final rain storm come three laps earlier it would have handed victory to Ganassi’s Kyle Larson, who gambled on staying out of the pits in the hope it would arrive sooner. Instead Kurt Busch took his second win of the year.

Sebastien Ogier stretched his championship lead to 56 points with his fourth win from the this first six events. And he did it despite the disadvantage of running first on the road on the opening two days.

However, the surprise of the rally was the driver who finished second. Hayden Paddon – who had never previously finished higher than fifth – set fastest times on stages two, three and four to take lead the rally by 30 seconds at one points. This lasted until Saturday afternoon, when a spin lost him the lead to Ogier. In the following stage a broken gearbox left a distraught Paddon in tears, but the car was fixed and he finished the rally in second. Theirry Neuville snatched third from Mads Ostberg on the final day after an off for the Norwegian.

Next round: Rally Poland (3rd-5th July)

With Max Chilton on Le Mans duty with Nissan, fellow ex-F1 driver Nelson Piquet Jnr took his place in Carlin’s Indy Lights squad for the IndyCar support races at Toronto. Piquet was on course for a winning debut in race one when he was hit from behind on lap 14 by RC Enerson, who was fortunate to survive this horrific shunt without injury.

Spencer Pigot took a brace of wins as Piquet was hit again in the second race. He’ll be hoping that’s all his bad luck taken care of ahead of the championship-deciding Formula E double-header in London in two weeks’ time, where he arrives as the points leader.

Which of these races did you watch over the weekend? How much of the Le Mans 24 Hours did you stay up for? Let us know in the comments below.

Next weekend F1 returns with the Austrian Grand Prix, supported once more by GP2 and GP3. Elsewhere the World Rallycross Championship, European Formula Three, WTCC and Australian V8s are all in action.