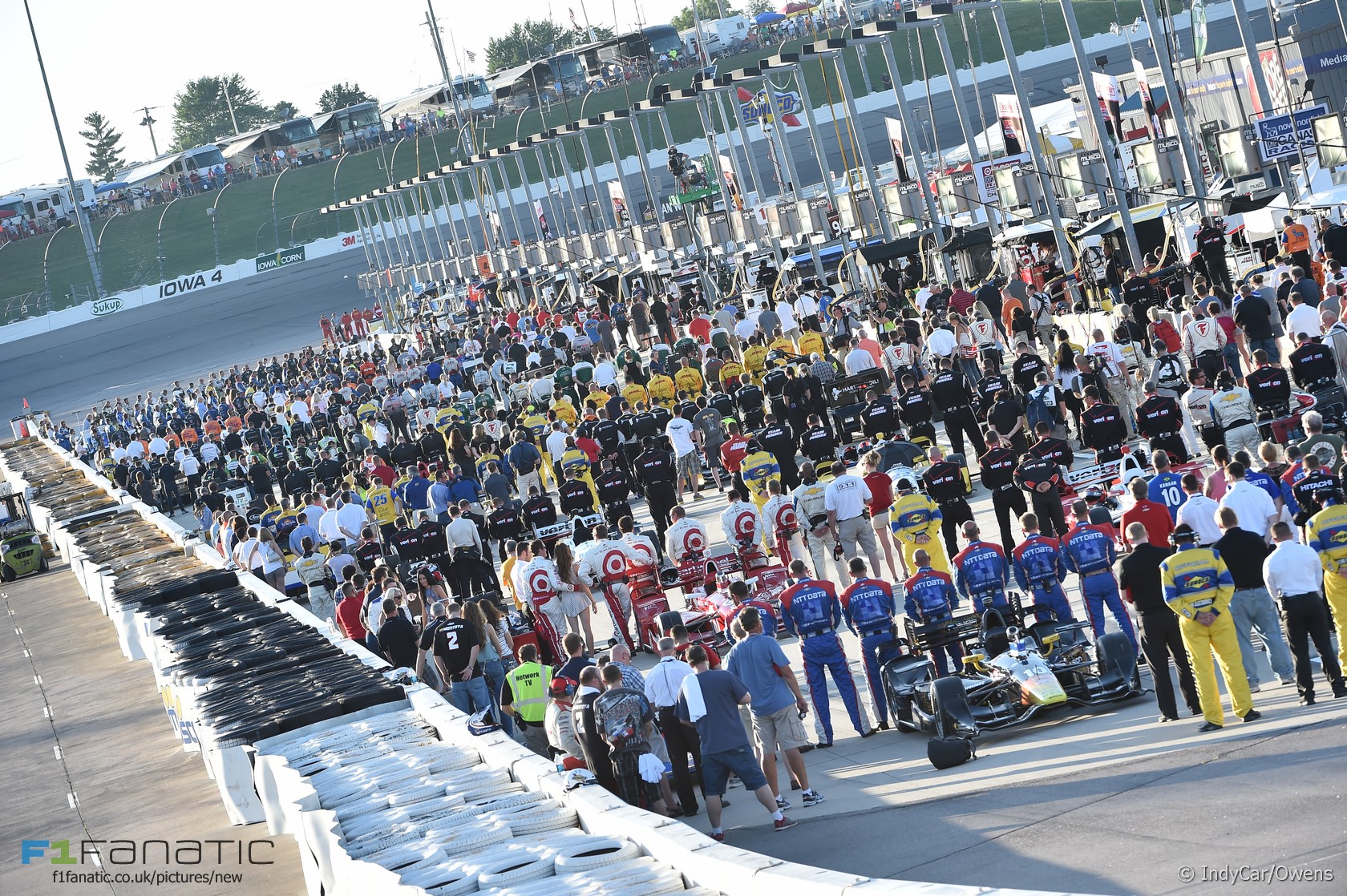 The American IndyCar championship and Japan’s Super Formula series were among those to hold a minute of silence out of respect for Jules Bianchi, who died on Saturday.

Ahead of the third round of Japan’s Super Formula Championship at Fuji Speedway a minute’s silence was held in honour of Jules Bianchi, whose fatal accident occurred at the Suzuka circuit where the series begins and ends.

A rain-hit qualifying session (see first video) left Andrea Caldarelli on pole position ahead of Joao Paulo de Oliveira and Daisuke Nakajima. However a slow start for the pole sitter allowed Oliveira into the lead, pursued by ex-F1 racers Kazuki Nakajima – back in action following his Spa Six Hours crash – and Kamui Kobayashi.

Andre Lotterer’s lap 11 pit stop prompted responses from most of his rivals. Meanwhile Caldarelli’s fortunes had gone from bad to worse: he was embroiled in a tight scrap for 14th with Koudai Tsukakoshi, Takuya Izawa, Naoki Yamamoto.

Lotter’s late stop got him ahead of Kobayashi, but not Nakajima. However Hiroaki Ishiura, who stayed out until lap 42, took the final podium place away from his closest championship rival. Caldarelli battled past Kobayashi on his way to sixth. The IndyCar paddock also observed a minute’s silence for Bianchi ahead of their race, which saw 2012 IndyCar champion Ryan Hunter-Reay take his first win since the same race last year.

It was a pot-boiler of a race for the championship. Leader Juan Pablo Montoya was in the wall after nine laps due to a suspension failure. Closest rival Scott Dixon was also sidelined with a broken upright, and lost second in the points standings to Graham Rahal.

The RLL driver had fallen two laps down early on with a puncture before recovering back to the lead lap, only to lose another lap with a shifting problem. He got back onto the lead lap once more with a lucky yellow, and sliced his way through the pack to finish a fine fourth.

It was a weekend to forget for Penske: pole sitter Helio Castroneves faded mid-way through the race and finished eleventh behind a similarly sub-par Will Power, while Simon Pagenaud came in a lap down.

An excellent restart on lap 185 was the basis of Hunter-Reay’s triumph: he jump from fifth to second, then moved past Josef Newgarden in the pit stops and held his CFH Racing rival back in the closing stages. Sage Karam completed the first all-American IndyCar podium since the 2006 Indianapolis 500, but was hunted down in the pit lane after the race by a furious Ed Carpenter following a robust exchange between the two on track.

One driver who did gain big points on leader Montoya was Graham Rahal, after a real rollercoaster of a race.

Kyle Busch won for the third time in four races in the Energy 301 at the New Hampshire Motor Speedway. The race ended under yellow flags and the Kentucky track saw its 12th consecutive different winner. Team Penske’s Brad Keselowski finished second having lead 101 of the 301 laps, ahead of Kevin Harvick in third, Joey Logano in fourth and Dale Earnhardt Jnr in fifth.

The farthest outpost of the FIA’s Formula Four series is the Sudamericana championship, which is in its second season. Points leader Pedro Cardoso stretched his advantage with victory in race one at the Powerpark circuit in Uruguay but was pipped to victory in the second event by Federico Iribarne, who was making his debut in the championship. You can see both races plus five hours of support races in the video above.

Was there any other motorsport you watched this weekend that caught your eye? If so, let us know in the comments below.

Next weekend is the next round of the Formula One Championship with the Hungarian Grand Prix, accompanied by GP2 and GP3. NASCAR also continues with their round from Indianapolis Motor Speedway.

11 comments on “Silence for Bianchi in Japan and America”