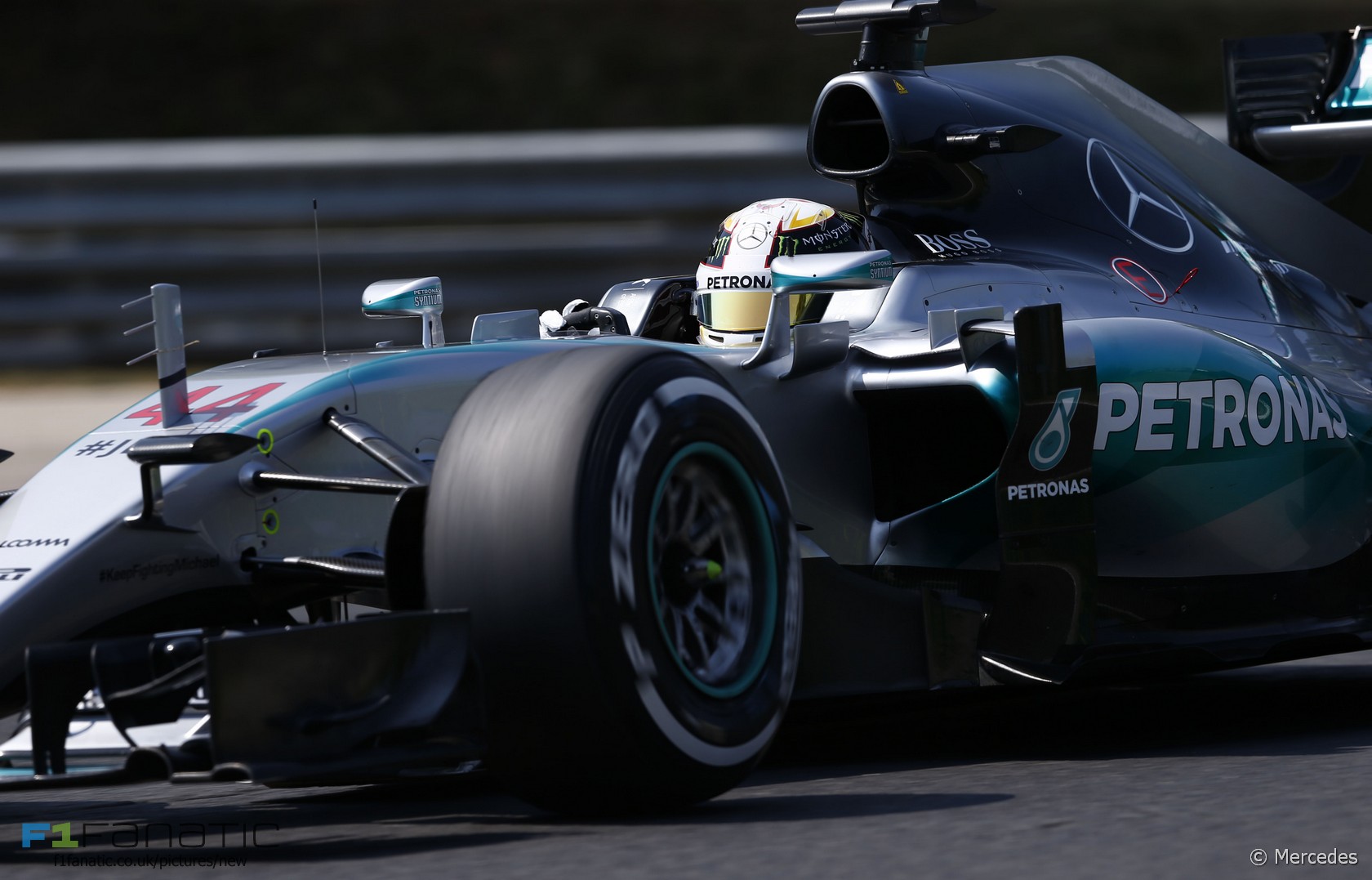 There’s no obvious way Lewis Hamilton could have asserted his dominance over proceedings at the Hungaroring any more emphatically than he has done so far.

Every practice and qualifying session has ended with his name at the top of the times sheets. Nico Rosberg is further behind his team mate than he has been at any time since the first race of the year.

And if Hamilton finishes on top again tomorrow, he will become the first person to win the Hungarian Grand Prix five times.

But as the last race showed, Mercedes cannot take it for granted that they will have things all their own way. They were mugged by the Williams drivers at the start in Silverstone, and as the Hungaroring has one of the longest runs to turn one of the season, a repeat of their sluggish starts will almost certainly be punished.

This is a greater concern for Rosberg than Hamilton, however, as he is starting off the racing line, which tends to be a particular disadvantage at this track. In today’s GP2 and GP2 races the second-placed driver on the grid struggled to get away cleanly.

Although Rosberg’s Q3 lap was a little untidy, his problems this weekend haven’t entirely been of his own making. “We must apologise to him,” said Mercedes’ executive director for technical Paddy Lowe, “as we only discovered last night that there had been a configuration error on his car throughout Friday which hasn’t given him an easy ride thus far”.

Rosberg’s difficulties continued into practice where he was plagued by apparently incurable understeer. “The positive could be that this setup might help me a bit more in the race,” Rosberg reflected optimistically, “as understeering could keep the rear tyres more alive”.

However the question of tyre wear will be influenced by an expected change in conditions at the Hungaroring. Air temperatures tomorrow are expected to be around 10C lower than today, and the track temperature correspondingly far short of the mid-fifties peaks seen over the past 24 hours.

On the strength of the running so far, if the soft tyre remains so much quicker than the medium then expect to see drivers tending towards two-stop strategies in order to minimise the time spent on the harder rubber. But the cooler weather could have a significant effect on this. It will be revealing if anyone chooses to start the race on the medium tyres, and if not, who plumps for them first.

As usual, the entire top ten will start on the soft rubber. Of them, the only driver with a new set for the race is Romain Grosjean.

Behind the Mercedes drivers, look out for a tight battle between Ferrari, Williams and Red Bull for the final podium position. The latter are enjoying their strongest weekend of the year so far, and Daniel Ricciardo came within three hundredths of a second of beating Sebastian Vettel to third place on the grid. However he has the disadvantage of starting off-line which, compounded by his Renault’s lack of straight-line speed, may leave him vulnerable to Kimi Raikkonen at the start.

Nonetheless, the race pace Red Bull showed on Friday indicates they may have a genuine chance of taking their first podium position of the year.

Can Rosberg keep Hamilton from victory? And who will be ‘best of the rest’?