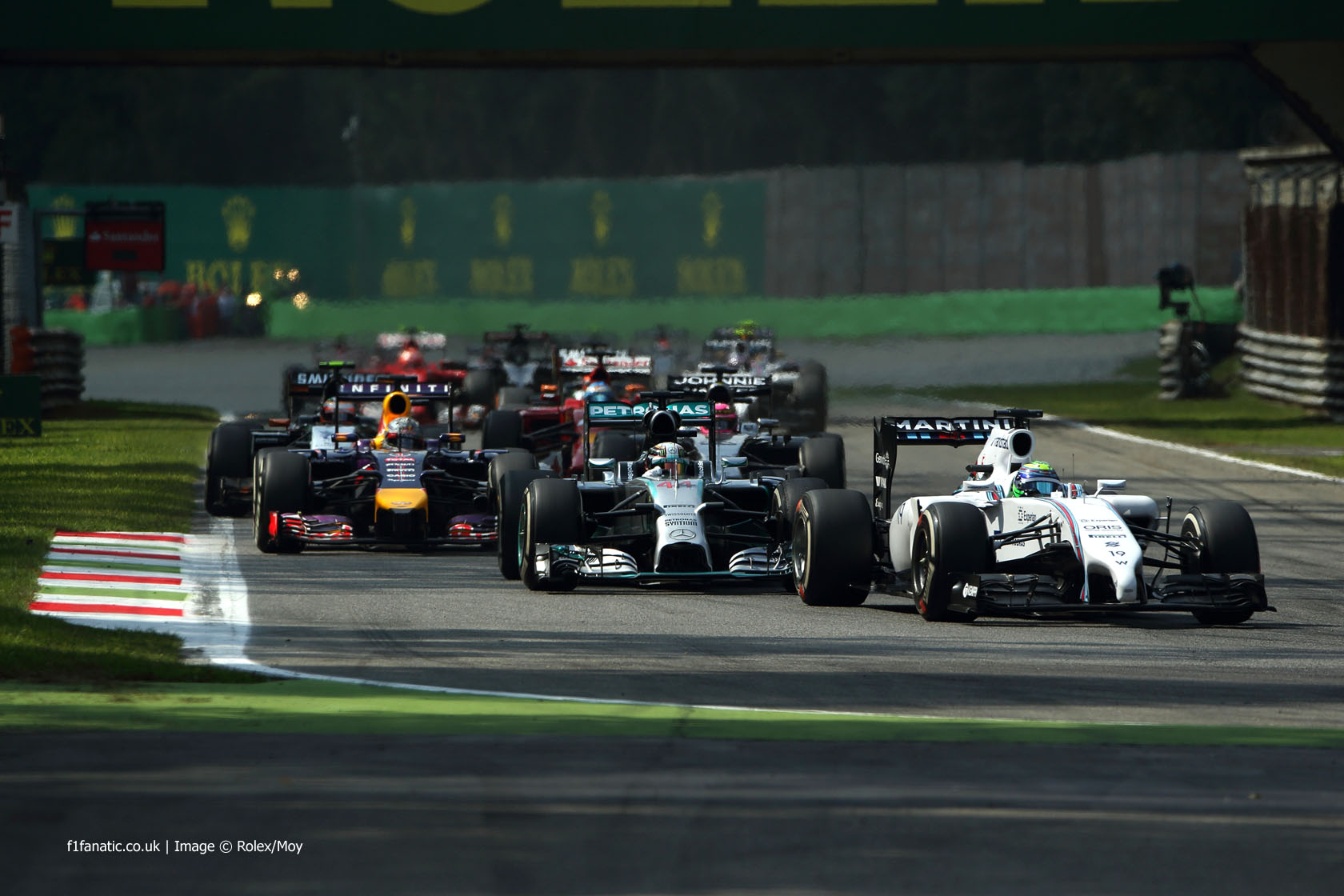 Formula One’s official tyre supplier Pirelli is in the spotlight as Formula One heads to Italy for the final European race of the year.

The precise cause of Sebastian Vettel’s tyre blow-out late in the Belgian Grand Prix remains unknown, though Pirelli has vowed to reveal the findings of its investigation in the run-up to the race.

This is an uncomfortable but not unfamiliar situation for F1. Four years ago at Spa Pirelli was forced to act after teams noticed blisters developing on their tyres after just a few laps.

It was discovered that some had been running the tyres beyond their recommended camber angles – Red Bull were using -4.35 degrees at the front compared to the advised -4 degrees. Ahead of the following race at Monza teams were told Pirelli’s pressure limits would now be enforced via the regulations, and lower limits were stipulated.

Pirelli took similar action in the wake of the spate of tyre failures during the 2013 British Grand Prix and also gave teams minimum tyre pressures to adhere to. They are understood to be planning to do the same at Monza this weekend.

With hindsight, Pirelli may regret making this the first race of the season where they are bringing a softer tyre mix than what was selected 12 months ago. This is the first time since the events of 2011 that the tyre manufacturer has brought the soft rubber to Monza.

Monza places an unusual combination of demands on tyres which are punished by kerbs and long braking zones in the chicanes and subject to high lateral loadings at Ascari and Parabolica. They also experience the highest speeds of the year: Daniel Ricciardo hit 362.1kph (224.9mph) during last year’s race.

But despite Monza’s unique contribution to Formula One’s heritage and its status as the only true high-speed, low-downforce venue left on the calendar, we may not have much longer left to enjoy it. Bernie Ecclestone insists he is offering the race organisers no more than anyone else pays to continue holding the race, but that minimum level is rising every year.

If the Italian Grand Prix organisers cannot afford it, the unthinkable will happen as surely as it has already happened in France and, this year, Germany.

Nico Rosberg is now more than a win behind Lewis Hamilton in the championship fight, and has identified two ways to raise his game.

“My start was not good so I need to work on that and also on finding those extra tenths in qualifying to get back on top there. I know I have the car underneath me to get pole and the win every time with this incredible machine the team have built, so nothing less will do.”

While Monza’s classic layout makes it a favourite with the drivers, Daniil Kvyat’s rues the “unfortunate” replacement of the gravel trap at Parabolica with an asphalt run-off.

“The changes there do make a difference,” he said. “It isn’t quite the same experience any more. You still have to push a lot and it still requires a lot of technique, but the problem is that even if you make a mistake you get forgiven. It’s not the same.”

Surprisingly, Williams were the least competitive of the four Mercedes-powered teams at Spa. That surprising development was aggravated by an error during the team’s first pit stop for Valtteri Bottas, leaving them with much to improve on this weekend.

Ferrari suffered one of the worst results of their dismal 2014 campaign on home ground last year: Kimi Raikkonen limped home ninth while Fernando Alonso retired with an ERS fault.

Their 2015 campaign has been a vast improvement, though most of their success has come courtesy of a driver who was booed by the crowd when he won this race two years ago. A repeat of either the victory or the booing both seem unlikely.

There’s no two ways about it: Monza will be “tough” for McLaren, Alonso readily admits. However Jenson Button did take some encouragement from the upgrades brought to their Honda power unit at the last race.

“Despite the issues, the car was well balanced in Spa and felt good to drive, particularly in qualifying,” said Button. “We’ll aim to make the most of that in Monza, too, before we head to the fly-aways where there’ll be circuits that’ll suit our car’s strengths much better.”

Team principal Vijay Mallya is setting his sights high after Sergio Perez took the team’s first top-five finish of the year at Spa. “We go there aiming to get both our cars in Q3 on Saturday and in the points on Sunday,” he said, “that must be our target for all the races to come.”

Carlos Sainz Jnr has retired from the last four races in a row due to technical problems and faces a further setback this weekend as he requires an engine change, which will mean a ten-place grid penalty.

Team mate Max Verstappen, meanwhile, will have his first experience of racing at Monza, having previously only tested an F3 car at the track.

Spa was bittersweet for Lotus as Romain Grosjean overcame a gearbox change penalty to give the team their first podium finish since 2013. However ongoing financial problems led to the team’s trucks being detained at the track after the race.

Question marks remain over the team’s future but they will make it at least as far as Monza and are confident of another strong showing – potentially even better than they managed in Belgium. It couldn’t come at a better time as Renault is rumoured to be considering a takeover of the team.

Felipe Nasr has fond memories of Monza. “I know the circuit well from every series I have come through,” he said. “It reminds me a lot of the time when I moved to Italy in 2009. Back then I lived just 40 minutes away from Monza.”

“It is a unique circuit for me. The flow is really nice, with Parabolica being my favourite corner.”

Roberto Merhi will forego an appearance in the Formula Renault 3.5 meeting at Silverstone to continue his F1 duties at Manor this weekend. However the team will continue to labour with a year-old version of Ferrari’s power unit. If you’re heading to Italy for this weekend’s race, we want to hear from you.