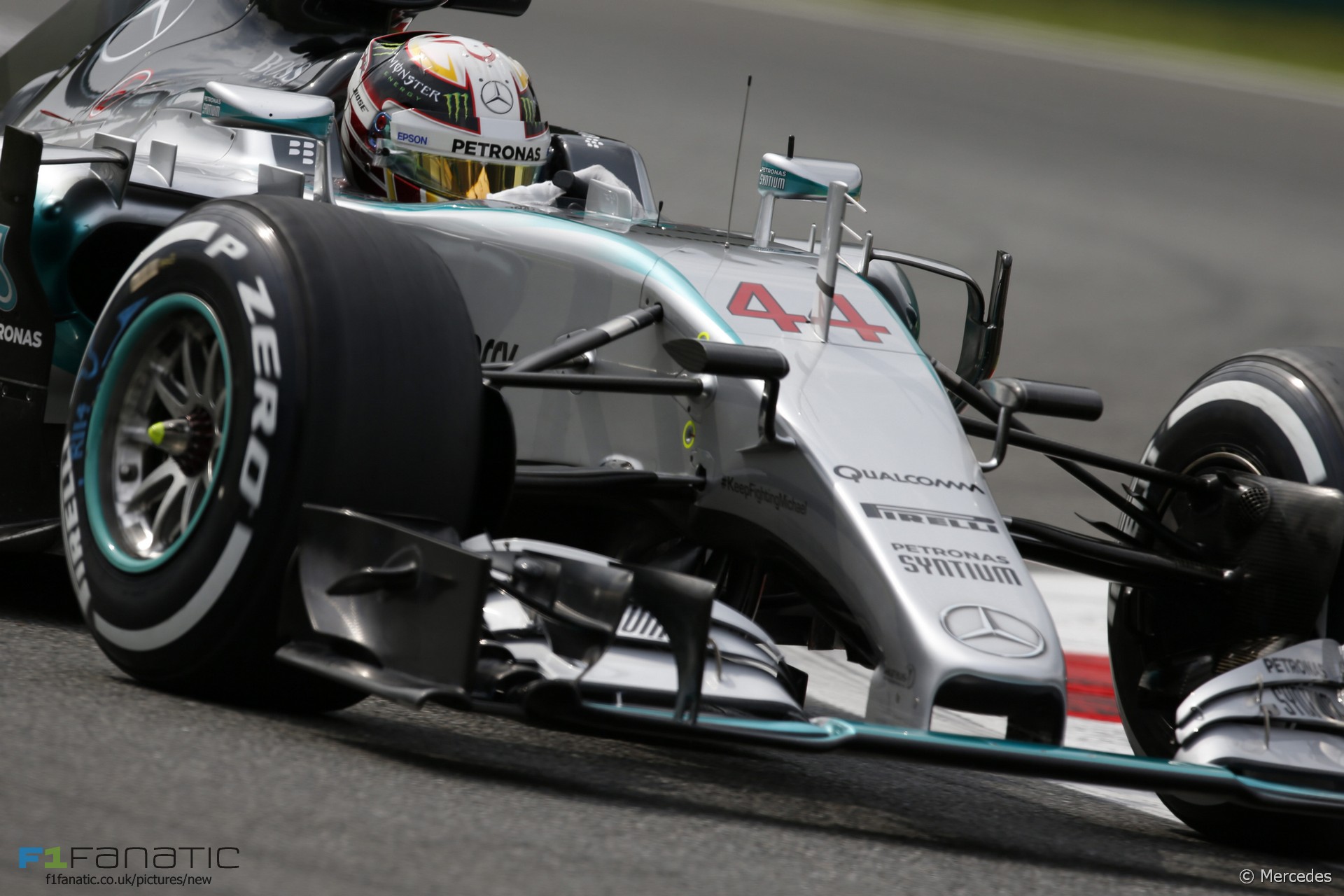 Lewis Hamilton dominated at Monza to win the Italian Grand Prix by almost half a minute from Sebastian Vettel as Nico Rosberg retired with engine failure three laps from the finish.

There was late drama for both Mercedes with Hamilton told to push to increase his already sizeable lead in the closing stages after concern over a potential penalty and Rosberg forced out with a smoking engine from third place only a handful of laps from the end.

All eyes were on Kimi Raikkonen’s at the start, but as the lights went out the Ferrari went nowhere. The former world champion eventually got going, but the Ferrari had already been engulfed by the entire field on the run to turn one.

At the front, Sebastian Vettel tried to pressure Lewis Hamilton for the lead, but the Ferrari was unable to make a serious challenge into the tight first corner and the Mercedes retained the lead.

Nico Rosberg continued a run of losing places at the start by dropping to fifth behind the two Williams, while separate contact for both Lotuses into the bottleneck first chicane put Romain Grosjean and Pastor Maldonado out of the race on the first lap.

Despite a torrid start, Raikkonen was soon up into the points after barely ten laps of the race completed. After fending off Vettel at the start, Hamilton began to steadily open up the gap at the front.

Rosberg struggled to find a way past Valtteri Bottas’s Williams in the opening stint and so Mercedes opted to pit their man first for his one and only stop at the end of Lap 18. Williams responded by bringing in Felipe Massa at the end of Lap 20, but with clear air the Mercedes was able to successfully undercut both Williams to jump up to third.

Hamilton and Vettel waited until the half way stage of the race to make their single stops, with the Mercedes resuming with a more than comfortable buffer over the Ferrari. The leader duly pulled even further away from Vettel, who was now having to be mindful of the slowly closing sister Mercedes of Rosberg now in third.

With Hamilton’s win seemingly assured, Mercedes were suddenly vulnerable with Hamilton told to push to increase his comfortable lead by his engineer, without being told why. Just when it seemed Hamilton may be under threat of a late problem, Nico Rosberg’s engine burst into smoke out of Curva Grande, ending his chances of a podium finish.

This left the final place on the podium up for grabs between the two Williams drivers, with Felipe Massa ultimately holding on to his position over team mate Valtteri Bottas.

Despite the concerns for Hamilton, the world championship leader suffered no dramas and duly took his seventh win of the season, with Vettel and Massa rounding out the podium.