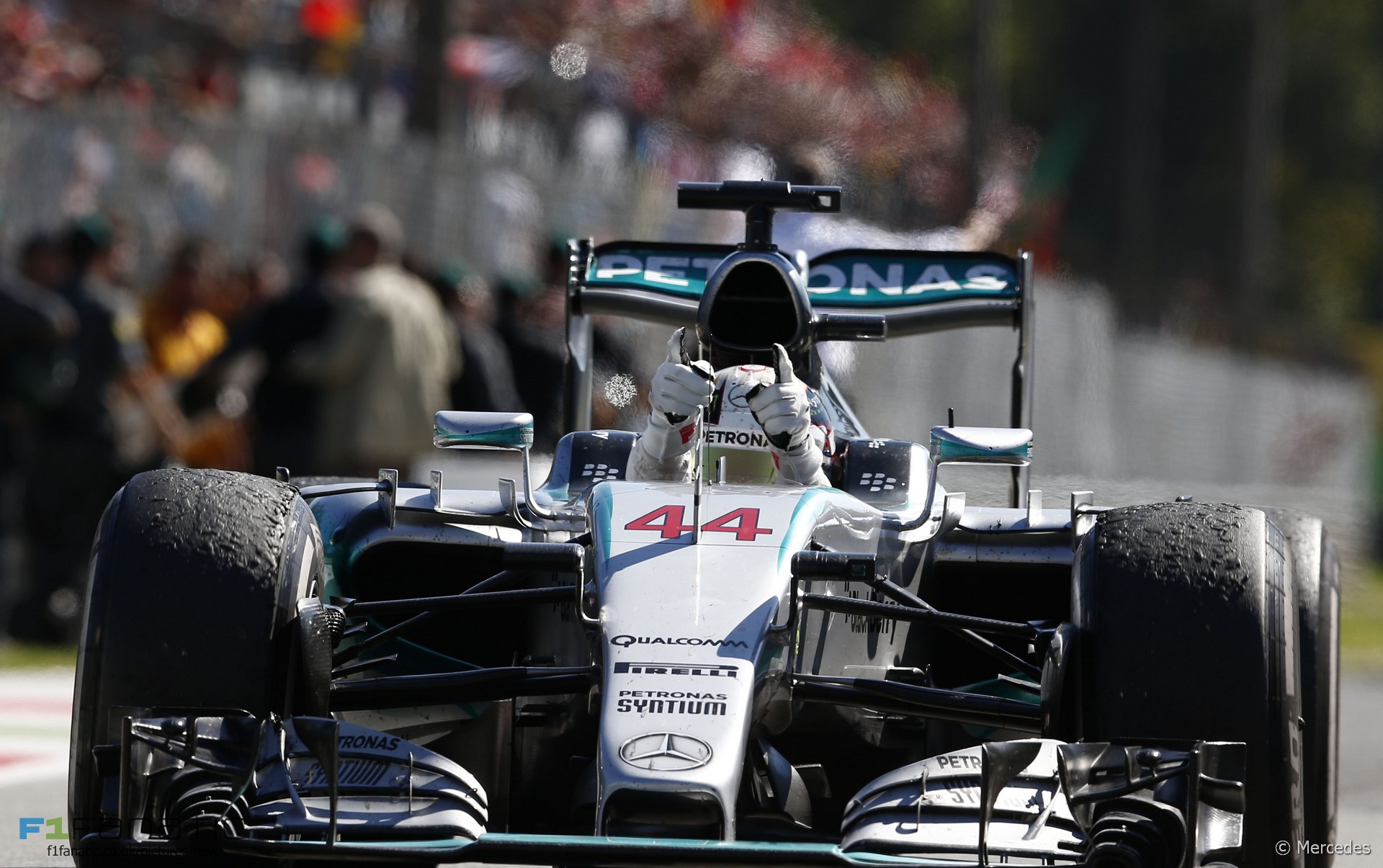 There’s only one word to describe Lewis Hamilton’s result at Monza: Perfection.

The Mercedes driver topped every session before the Italian Grand Prix, led every lap during the race and set fastest lap on his way to victory. He also won our Driver of the Weekend poll – but over half of you were more improved with the performance of other drivers.

Mercedes used all seven of their remaining engine development tokens ahead of the Italian Grand Prix, and when they turned their engine up in the opening practice session, the 1.5-second gap Hamilton had over his rivals was ominous.

Hamilton’s hand was further strengthened when team mate Nico Rosberg had to swap his upgraded engine for the previous, less powerful one due to reliability problems.

However in qualifying the Ferrari drivers emerged as a significant threat for pole position, and it was the two red cars which lined up behind Hamilton as the Mercedes driver took his seventh pole position in a row. That gave Hamilton a useful buffer between him and his closest championship rival on the grid, and when Kimi Raikkonen fluffed his start Rosberg was among those who lost ground having to dodge around the Ferrari driver.

Hamilton took command and romped clear, pulling over 20 seconds away from the pursuing Sebastian Vettel. All seemed to be running smoothly until, with just a handful of laps to go, race engineer Peter Bonnington urged him to push – and not ask questions why.

He obliged and came home a worthy and emphatic winner, comfortably ahead of second placed Vettel, but as the celebrations began his victory was cast in doubt as the reason for Mercedes’ radio message became clear: he was under investigation for having under-pressured tyres at the start of the race. His triumph was upheld following a stewards’ investigation, and with that he has taken a strong 53-point lead in the championship ahead of Rosberg, whose old power unit expired before the chequered flag.

Hamilton won the Driver of the Weekend poll for the fourth time this year – Vettel is next on three – taking 47.6% of the vote.

Very hard not to choose Hamilton, on results he couldn’t have done any better. But given Rosbergs loss of the updated engine he didn’t have any challenge really. He admitted himself the pole lap wasn’t as good as his lap in Spa. Can’t help but feel the car did this one for him.
@philipgb

For me Hamilton was Driver of the Weekend all the way simply because he was the best in every session.

When was the last time a driver finished first in every session held during a Grand Prix weekend and set the fastest race lap? I can’t recall such a feature in recent history.
Jelle van der Meer Raikkonen blamed a problem with his clutch for his poor start, but Ferrari hasn’t clarified whether that was the case or if their driver made a mistake with his starting procedure.

Nonetheless Raikkonen recovered to finish fifth, three places behind his team mate, yet took more Driver of the Weekend votes than Vettel – 13.3% versus 8.9%.

Raikkonen did well in qualifying to topple Vettel, which has been a rare occurrence this season. The start did look pretty odd, and it wasn’t just a slow start – it looked from what I could see to be an issue with the car. Despite this, Raikkonen not only managed to carve his way through the field, but looked after his tyres better than any of the other front runners as well. Given what happened at the start, I felt that finishing behind the two Williams was the best he could have managed.
@craig-o

Daniel Ricciardo’s recovery from the back row of the grid to finish eighth earned him plaudits (he was Keith’s Driver of the Weekend pick) and Marcus Ericsson received several positive comments after one of his best performances so far, yet they only received 7% and 5% of the vote respectively.

Ricciardo: At the back of the grid through no fault his own and recovered excellently to salvage a few points.
@alilane4

He’s brought it home in the points a few times lately, and even here starting behind his higher-rated team-mate due to a bit of a harsh penalty still managed to get himself into the points. Have to admit I’ve always considered him a bit of a non-entity pay driver but am quite impressed he’s doing well in that Sauber.

So I gave it to him. Someone I didn’t expect to do well at all, actually did quite well all things considered.
@rocketpanda

13 comments on “Perfect Hamilton wins Driver of the Weekend”