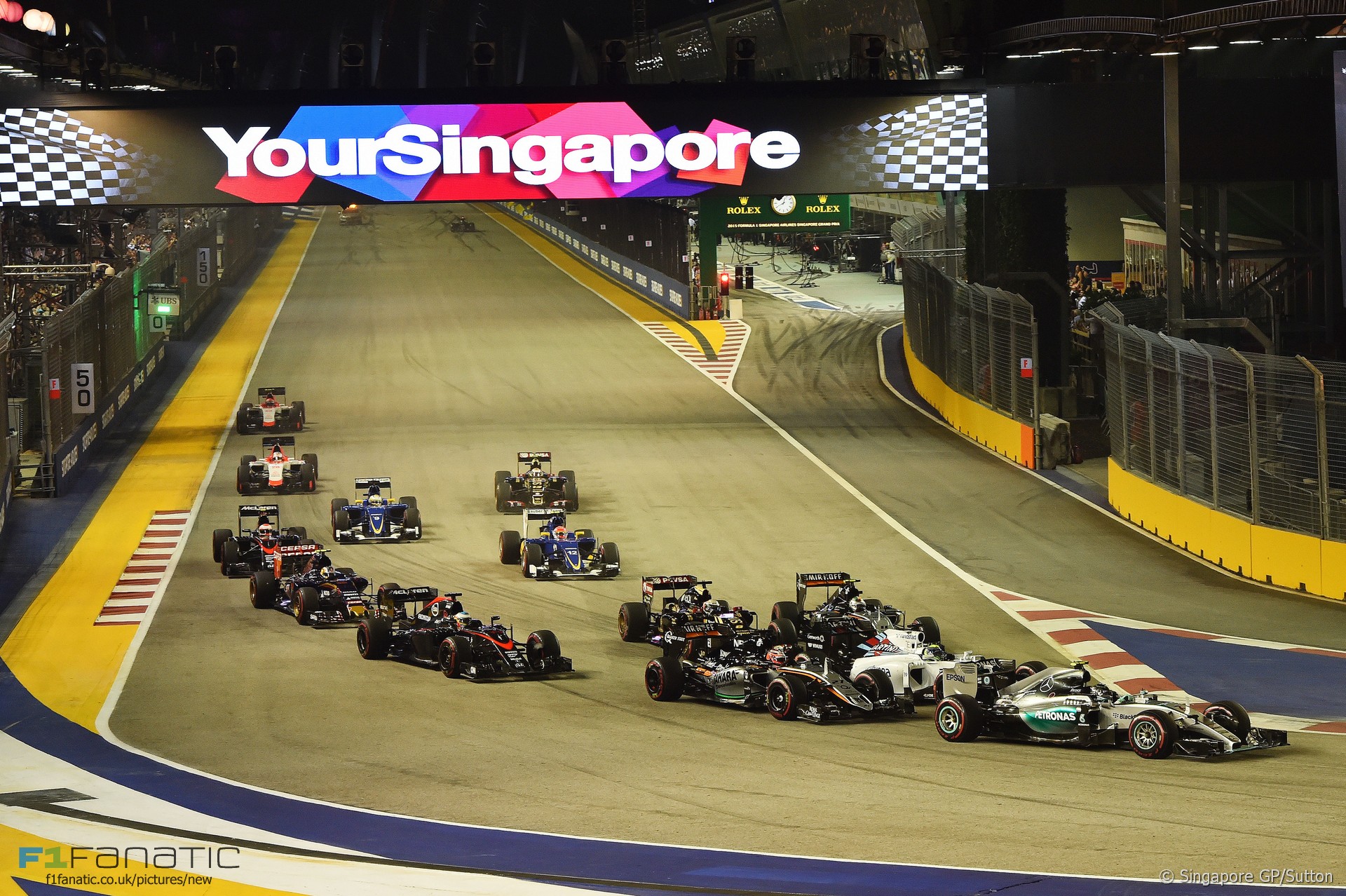 Which F1 driver was the best performer during the Singapore Grand Prix weekend?

Lewis Hamilton – It seemed like business as usual for Mercedes in first practice, but when the serious business began and the track rubbered in they found themselves grappling with deep set-up problems. Hamilton described the problem as a sheer lack of grip, and it appeared to affect both drivers equally – Hamilton had his usual margin in hand over Rosberg in qualifying. A switch to soft tyres during the first Safety Car period could have set him up for an interesting run to the flag, but a power unit problem forced him out before then.

Nico Rosberg – When his engine died shortly before the start of the race Rosberg must have feared he was in for a repeat of last year. He was able to start the race but had to use a different procedure, despite which he maintained his place at the start. The Safety Cars falling as they did, he was never going to be able to get a jump on his team mate, but when Hamilton dropped out he inherited fourth place and regained some of the ground he lost at Monza.

Daniel Ricciardo – Revelled in having a competitive car for once, splitting the Ferraris in qualifying, and while his final Q3 run wasn’t perfect he wasn’t going to find the 0.543 seconds to Vettel. He was content to let the Ferrari pull away in the opening stages, then began chipping away at Vettel’s lead after lap seven. But how this fight would have been resolved will forever remain a mystery as the Safety Car kept Red Bull from realising their full potential.

Daniil Kvyat – Kept Ricciardo honest in practice and qualifying up until the crunch time. He nearly got past Raikkonen for third at the start, then had the misfortune to make both his pit stops moments before the two Safety Car periods. That left him sixth behind Bottas.

Felipe Massa – “Not a fantastic track for us”, admitted Massa. He only had one set of new tyres left for qualifying and made an error on his run, leaving him ninth. He pitted one lap in front of Hulkenberg in an attempt to stay in front of the Force India, but the pair tangled as Massa rejoined the track. A puncture from that spoiled his race, and a gearbox failure later ended it.

Valtteri Bottas – Declared himself satisfied with seventh on the grid and after a clean start he had a fairly uneventful run to fifth, besides having to nurse a gearbox problem in the closing stages.

Sebastian Vettel – This looked like 2011 or late-2013 era Vettel: car fully underneath him, he blitzed pole position by over half a second with a second run which he later admitted wasn’t really necessary. The parallels continued into the start of the race, where he immediately drew three seconds clear at the start. That performance advantage was clearly only temporary, however, but the two Safety Cars afforded him protection and gave him the chance to control the pace of the race, sparing his tyres.

Kimi Raikkonen – Said he was pleased to qualify as high as third – over three-quarters of a second off his team mate – having failed to find the same way with his Ferrari that Vettel had. When Vettel was ran at his true pace in the race, Raikkonen’s deficit was exposed, which explains his “mixed feelings” over taking his second podium finish of 2015.

Fernando Alonso – On Friday Alonso said eighth was a fair reflection of the team’s pace, but come Saturday he was no longer convinced they were quick enough for a place in the top ten, even if Q2 hadn’t been disrupted by a yellow flag. With cars in front hitting trouble points were definitely possible until his gearbox failed.

Jenson Button – Generally a few tenths off Alonso’s pace, he scraped into Q2 with his final run. Was kept busy with settings changes during the race as he followed Alonso into the top ten, but tangled with Maldonado and damaged his front wing. Soon afterwards he too was struck down with a gearbox problem.

Nico Hulkenberg – Another driver who was still chasing his set-up as qualifying began, trying to dial out snap oversteer, he ended up missing the cut for the top ten. He may have tried a little too eager to claim a place from Massa at the pit exit, but it seemed harsh for the stewards to penalise him for what was little more than a racing incident in which he was the biggest loser.

Sergio Perez – Believed he could have made it into Q3 had it not been for the yellow flag caused by Sainz. He gained three places at the start, however, and profitted from the first Safety Car period to make up more places. He eventually finished seventh, holding off the fast-closing Toro Rossos in the closing stages.

Max Verstappen – As in Monaco, Verstappen looked instantly at home on a true street track that was new to him. Despite running very wide at the final corner he split the Williams drivers for eighth on the grid. He stalled at the start and lost a lap, but gained it back during the first Safety Car period. A switch to super-softs for the final stint allowed him to make a run into the points, and he resisted his team’s call for him to let Sainz through to have a go at Perez.

Carlos Sainz Jnr – Hit the wall during practice on Friday and again in qualifying, wrecking his chance of joining Verstappen in Q3. In the race he suffered a repeat of the gearbox problem which had delayed him in China, but he was able to follow his team mate to complete a double points score for Toro Rosso – their first since Malaysia.

Romain Grosjean – Reached Q3 for the tenth time this year which he admitted was “something of a surprise” on a track which didn’t flatter the car. He got away poorly at the start, not helped by Verstappen stalling in front of him, and ran into trouble while trying to stretch his tyres out at the end of the race. After dropping out of the points the team tactically retired his car to save its gearbox for Japan, amid doubts over how many spare parts they have.

Pastor Maldonado – Like Raikkonen at Ferrari, Maldonado couldn’t find the grip his team mate had on the softest rubber, but with Lotus further down the pecking order the difference between the two meant Maldonado was out in Q3 while Grosjean reached the final round. Like Grosjean he struggled with his long stint on soft tyres, unlike Grosjean he found it necessary to risk collisions as faster cars came past him, with the usual result.

Marcus Ericsson – Trying to validate a new aerodynamic update at a track like Singapore was always going to be a struggle for Sauber, and they expect it will bear fruit at later races. Ericsson was shaded by Nasr in qualifying, where both went out in Q1. His race was compromised when he neglected to reset his brake balance after a pit stop, leading to a substantial lock-up. He complained about being held up by his team mate early in the race but ended up behind Nasr at the flag, just outside the points.

Felipe Nasr – Didn’t expect to go out in Q1 but admitted he is still struggling to get the most out of the super-soft rubber. He made a conventional two-stop strategy work in the race to claim the final point.

Will Stevens – Described Singapore as “the most difficult of the season so far” after clipping the wall during his first day of running at the track. Despite experiencing a lot of tyre degradation in the race he brought the car home, albeit behind his new team mate.

Alexander Rossi – With the advantage of some prior track experience Rossi was reasonably close to his team mate’s pace on his first day in the car. But a crash at the end of first practice reduced his running in the second session, and it was no great surprise that he lined up last. He admitted he didn’t get away well at the start, but he got past Stevens at turn five and finished ahead of him. This was despite losing radio communications at one stage, which was why he failed to regain a lap during a Safety Car period.