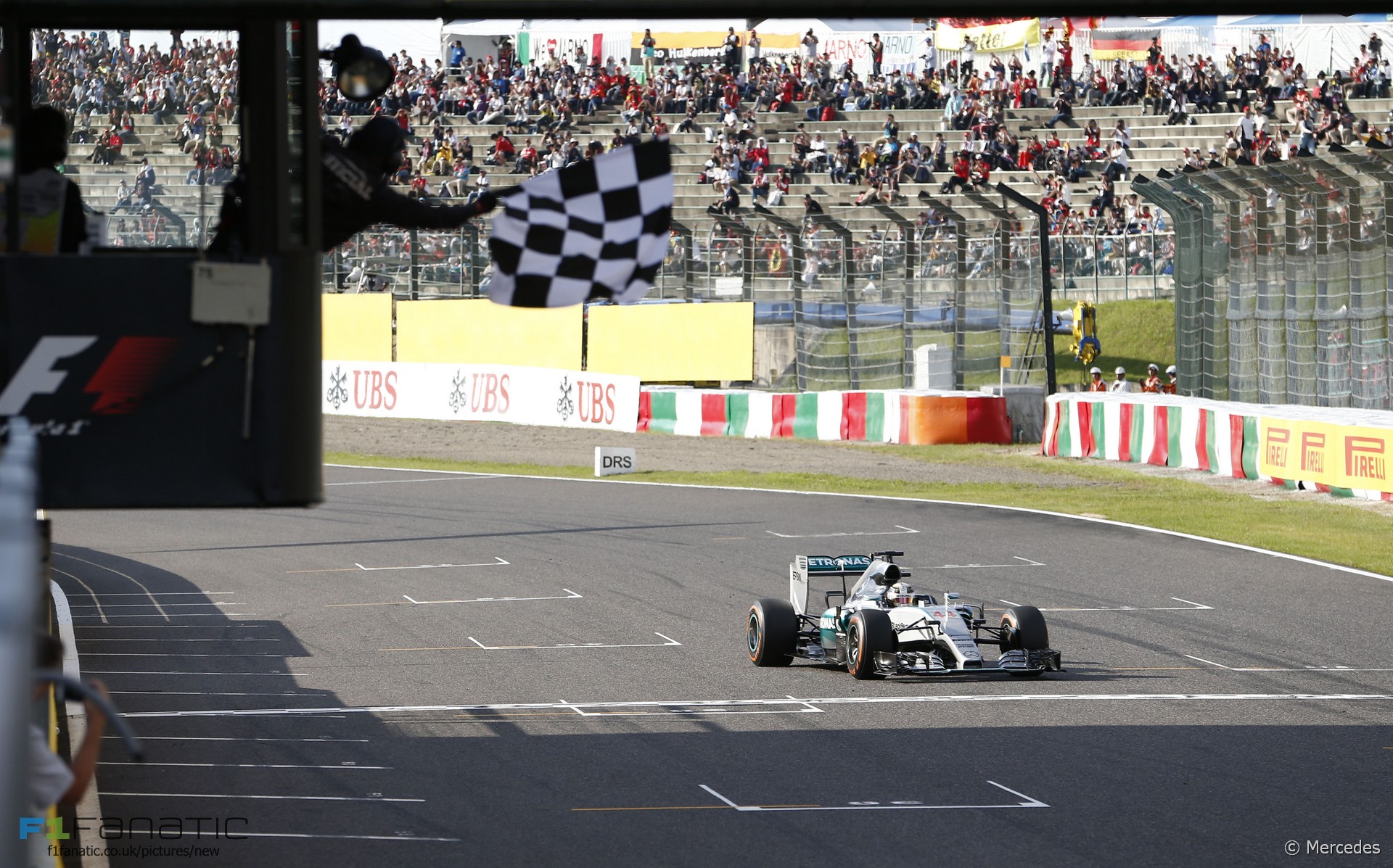 Did Nico Rosberg have a flashback to Spa last year?

As he and Lewis Hamilton rounded the opening corner side-by-side and Rosberg found himself edged closer and closer to the run-off area, it must have crossed his mind that he could chance staying alongside Hamilton and risk the contact, just as happened in the Belgian Grand Prix.

But he thought better of it, took a trip across the run-off area, and was passed by Sebastian Vettel and Valtteri Bottas. In that moment, the pole sitter lost his chance to win the Japanese Grand Prix and with it the possibility of closing down Hamilton’s championship lead.

Having dispensed with his team mate at the first corner, Lewis Hamilton’s eighth victory of the year never looked under threat. But Rosberg had to dig deeper to ensure an eighth one-two for Mercedes.

Rosberg gave Bottas three laps of solid attention before dropping back as his engine was beginning to overheat. Williams has been conservative with its strategies in the past but spied an opportunity after Marcus Ericsson spun on lap ten. That plus Nico Hulkenberg’s pit stop the following lap created a space where Bottas could rejoin the track without traffic in after a pit stop, and Williams wasted no time bringing him in.

Mercedes therefore resolved to try to get Rosberg ahead by leaving him out for an extra four laps. It nearly worked – he picked up a few tenths despite Bottas having a new set of the softer tyres – but he emerged from the pits still behind the Williams on lap 16.

It didn’t last. The very next lap Rosberg launched his car down the inside of the Williams from a fair distance back at the chicane, but made the pass stick and was up into third place.

Vettel, however, would not be passed so easily. Nor could Rosberg get as close: Ferrari advised Vettel to maintain a two-second margin over his pursuer and he duly did – but it wasn’t enough.

After a short, 14-lap middle stint Rosberg made for the pits once more, and he had an unwelcome surprise for Ferrari when he rejoined the track. As he had come out of the pits behind Bottas after his first pit stop, Rosberg’s out-lap pace had been disguised. When Ferrari saw him lap one-and-a-half seconds quicker on his out-lap than Raikkonen had done on the previous tour, they knew Vettel was in trouble. Sure enough, despite Vettel’s pit stop being fractionally quicker than Rosberg’s, he dropped behind the Mercedes.

Agony at home for Honda

The second round of pit stops was a mixed affair for Ferrari, who lost a position with Vettel’s car and gained one with Raikkonen’s. Bottas fell to fifth place but kept pace with Raikkonen over the balance of the race, suggesting this was a position he might have been able to keep with an earlier pit stop.

Mercedes customer cars filled the next three places as well: Nico Hulkenberg had a solitary run to sixth and the Lotus pair ensured the team emerged from a difficult weekend with points for both cars – only the second time they have done so all year.

Further back the proceedings had more lively, though not in a good way for circuit owners Honda. Fernando Alonso and Jenson Button both started well but they were passed on the approach to turn one with cruel ease.

Alonso lost two places on consecutive laps and Button saw Felipe Nasr and Max Verstappen blast either side of him on the fourth tour. That illustrated the shortcomings of their power unit so plainly it was hardly necessary for Alonso to describe it on the radio as a “GP2 engine”.

Verstappen pitted soon after that, being one of the first to do so, saving his new set of medium tyres for the final stint. This paid off handsomely: he passed Alonso in his middle stint and took Sainz after his final pit stop. Sainz had compromised his race by hitting a bollard while making a late dive for the pits in an attempt to jump ahead of Pastor Maldonado.

No points for Red Bull

Having made his point on the radio, Alonso nearly scored one too, but finished 13 seconds adrift of Sainz’s Toro Rosso. Ericsson’s attempt to do half the race on a set of hards failed to pay off, and he held up a train of cars before being passed by two of them.

The first of these was Sergio Perez, one of a quartet of drivers who’d suffered a compromised start of the race. Perez had been tapped into a spin at the first corner after making contact with Sainz while trying to dodge around Felipe Massa’s Williams.

Having pitted at the end of lap one, Perez spent the rest of the race hoping for a Safety Car and lobbying for one when the opportunity arose – even addressing race director Charlie Whiting on the radio directly at one point. It was to no avail, and it wasn’t just Perez who was disappointed not to get that break.

Massa had slowed on the approach to turn one after making wheel-to-wheel contact with Daniel Ricciardo which, unusually, left both with punctures.

“I saw the gap between Kimi and Felipe and I knew it was close, but I thought they would make a bit of room,” said Ricciardo. Both he and Massa limped back to the pits and Ricciardo’s subsequent progress was further impaired by damage to his car’s floor. Red Bull’s first point-less weekend of the year was a crashing low after the high of Singapore, where they were genuine contenders for victory.

Ricciardo passed Button for 15th, while Massa was promoted to 17th when Felipe Nasr became the only driver to stop before the end of the race, due to an unexplained handling problem.

Rosberg had arrived in Japan knowing he badly needed a victory to rein Hamilton in. He grabbed his chance in qualifying, but a less-than-perfect start opened the door for his team mate to pull 48 points clear in the standings.

Would the outcome have been any different had Rosberg got away more quickly? Hamilton finished almost 19 seconds ahead despite clearly moderating his pace – his second-best lap was 1.7 seconds slower than his quickest – indicating Rosberg would have had to work very hard to keep his track position advantage if Hamilton had been behind him.

Mercedes were back at their best following their mysterious loss of pace in Singapore. At Suzuka the only mystery was why Formula One Management showed so little of the silver cars during their broadcast.

In one sense, the sight of two Mercedes disappearing at the front of the field is not exactly new. But some viewed FOM’s coverage priorities as Bernie Ecclestone sending Mercedes a message that their inevitable championship success won’t receive the attention it merits unless they fall into line.

25 comments on “Hamilton disappears from his rivals in Japan”