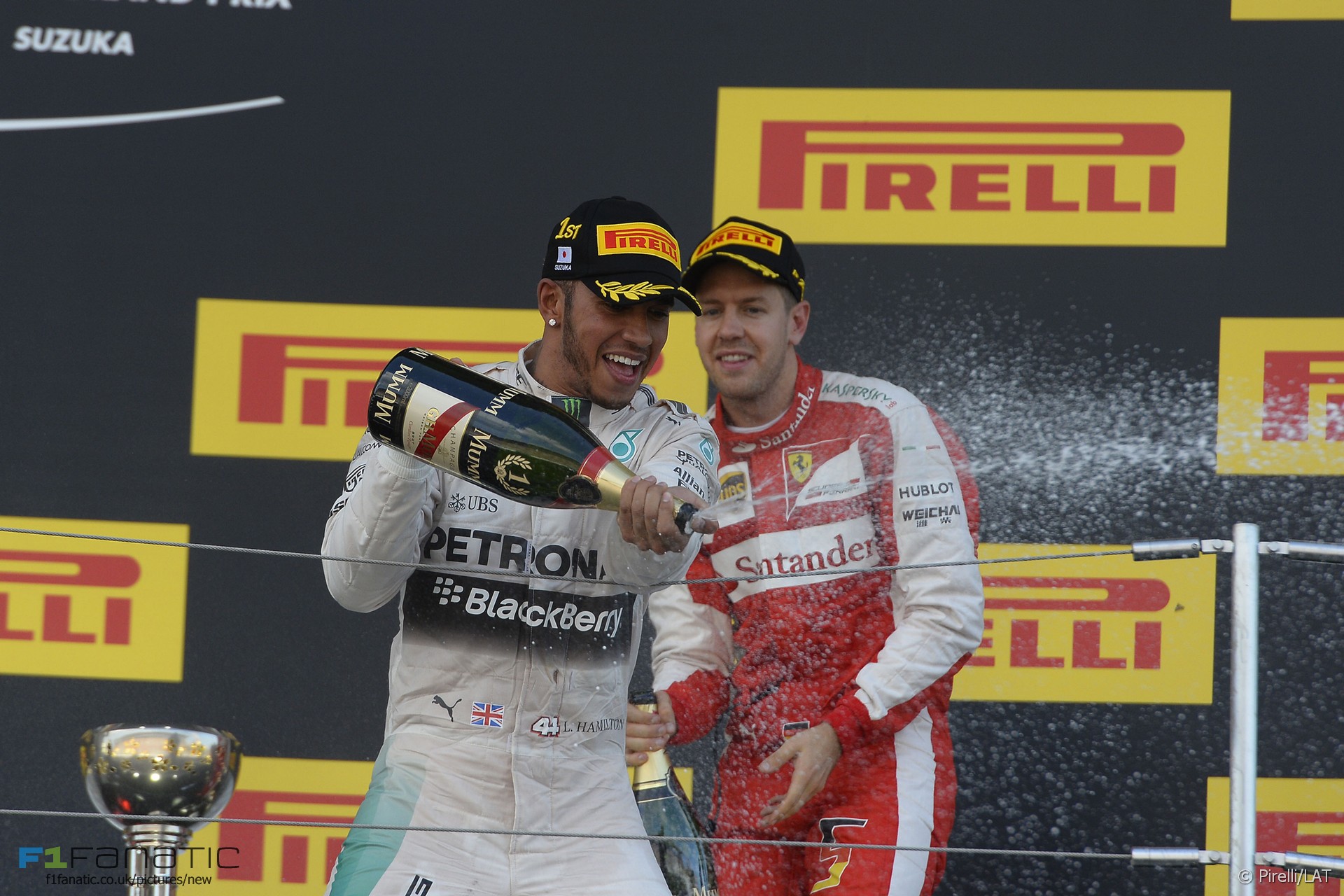 Lewis Hamilton became the second driver in the space of five races to equal Ayrton Senna’s tally of 41 race victories. Sebastian Vettel did the same in Hungary.

Vettel has already added his 42nd win last week, making him the third most successful F1 driver of all time in terms of victories. But as Hamilton as the all-conquering Mercedes W06 beneath him, don’t bet against him being ahead at the end of the season.

Hamilton reached Senna’s milestone in his 162nd race – one more than Senna started. Here’s how all three drivers compare at the moment:

Hamilton led every lap of the way and set the fastest lap, but for the second weekend in a row a driver missed out on a ‘grand slam’ by less than a tenth of a second. Nico Rosberg beat Hamilton to pole by 0.076 seconds.

Rosberg’s second pole position of the year was the 17th of his career, giving him as many as Jackie Stewart. Rain on Friday meant the track was still ‘green’ on Saturday, and Rosberg’s pole time of 1’32.584 was 0.078 seconds slower than he managed last year. Surprisingly, Hamilton still hasn’t had a pole position at Suzuka.

This was the second time Rosberg has out-qualified Hamilton this year. That leaves Romain Grosjean as the only driver who’s participated in every weekend this year and only been beaten by his team mate once in qualifying.

Rosberg finished between Hamilton and Vettel – the same top three as last year and the seventh time this trio have occupied the podium this year.

For the first time in the V6 hybrid turbo era every car which started the race was classified (Felipe Nasr was not running but he had completed 90% of the race distance). This last happened in the 2011 European Grand Prix at Valencia, with a larger field of 24 cars.

Fernando Alonso’s 247th grand prix wasn’t a happy one, but he has now started more races than all by far drivers in F1 history, one of which is his team mate Jenson Button on 279. Having passed David Coulthard on Sunday, Alonso should equal his former team mate Jarno Trulli’s 252 starts at the final race this year.

Button continued his record of finishing every race he has started at Suzuka – this was his 14th – but this was the first time he was outside the top ten.

Red Bull failed to score for the first time since last year’s Australian Grand Prix, when Vettel dropped out with an engine problem and Daniel Ricciardo was disqualified after taking the chequered flag in second place.

And finally, yesterday was probably the last time we’ll ever see a 17-year-old on an F1 grid. Max Verstappen turns 18 on Wednesday, and from next year the FIA will impose a minimum age limit of 18 for F1 drivers.