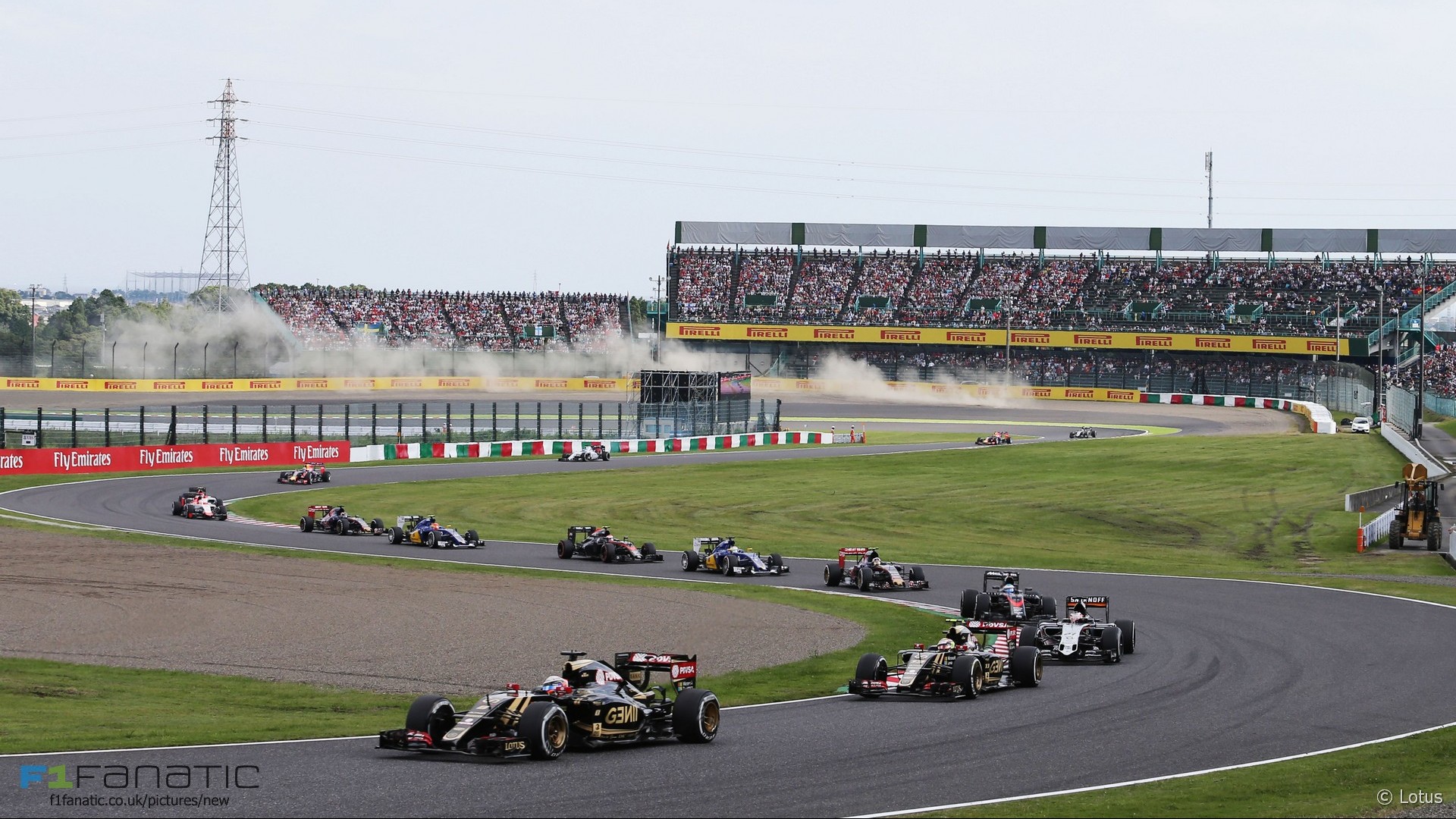 Which F1 driver was the best performer during the Japanese Grand Prix weekend?

Lewis Hamilton – It was nip-and-tuck between Hamilton and Rosberg on their first runs in Q3, and if Hamilton’s effort had been tidier he might have taken pole position. Soon after the start of the race that became irrelevant, however: Hamilton got down the inside of Rosberg at the first corner and exploited that advantage to its fullest. “I had my corner and so we were very, very close but I was basically understeering, I was running out of grip,” Hamilton explained. “I imagine Nico was running out of road, but that’s what happens when you’re on the outside.” From then on his victory looked assured, despite a mid-race lock-up which left him with a flat-spotted tyre. Once it was replaced a rapid out-lap after underline how much pace he had in hand.

Nico Rosberg – Rosberg’s momentary loss of power at the start – possibly caused by how he managed the Mercedes on the formation lap – cost him dearly. “It was close,” he explained, “I had to avoid a collision” – the pair tangled in similar circumstances at Spa last year. After that Rosberg drove well to reclaim second place: he came from a long way back to pass Bottas at the chicane and erased a two-second deficit to Rosberg with a scorching out-lap from his second pit stop. But the win was long gone.

Daniel Ricciardo – A top five start was possible, Ricciardo believes, but he qualified seventh. He started superbly but with Massa and Raikkonen converging in front of him contact was made, leaving him with a puncture and floor damage. After pitting for new rubber on the first lap he did well to complete the race distance with just one further pit stop, but without a Safety Car points were never going to happen.

Daniil Kvyat – Although he was quickest in the rain on Friday Kvyat knew it was irrelevant. When the track dried out he struggled with a “messy” (his word) final practice and an even messier qualifying session – a straightforward mistake at turn ten had destructive consequences and left him starting from the pits. He struggled with brake temperatures and tyre life in his newly-built car in the race, and was frustrated by his overtake button not working.

Felipe Massa – Having been fourth in Q2 he lined up fifth on the grid, and the contact with Ricciardo spoiled his race. He lost more time than the Red Bull driver getting back to the pits and only had the two Manors behind him at the flag.

Valtteri Bottas – Third on the grid at Suzuka for the second year in a row, he was passed by Vettel at the start but got in front of Rosberg. An early first pit stop kept him ahead of the Mercedes until Rosberg surprised him at the chicane. Another positions was lost to Raikkonen in the pits, leaving Williams to regret not having brought him in sooner.

Sebastian Vettel – Moved up from fourth to second at the start and probably had the pace to hold onto the position. Ferrari instructed him to keep Rosberg two seconds behind which he did, but the Mercedes driver was still able to jump ahead by pitting early.

Kimi Raikkonen – Singapore apart, Raikkonen has been closer to Vettel in qualifying in recent races and it continued in Japan, where he was just a tenth of a second off. He had a straightforward race, needing only to jump ahead of the Williams of Bottas, which he did.

Fernando Alonso – What Alonso said during the race received much more attention than how he performed, which is a shame because he drove superbly. He was deservedly proud of a qualifying lap which came within half a second of getting the McLaren into Q3 despite a 16kph straight-line speed disadvantage. A great start got him up to ninth – and then the faster cars blasted past him on the straight. His “GP2” comments were not without justification.

Jenson Button – Pointed out he’d been given the wrong engine settings for what turned out to be his only flying run in Q1 before yellow flags disrupted the end of the session, costing him a chance to reach Q2. Like Alonso the places he made up at the start were swiftly lost due to the Honda’s lack of top end – two cars passed him at once when the DRS zone was activated on lap three. Being jumped by Ericsson at his second stop kept him from finishing closer to Alonso.

Nico Hulkenberg – Said he’d produced his best in qualifying despite not joining his team mate in Q3. He gained five places at the start – three from the drivers tangling ahead of him – and used an early first pit stop to jump both the Lotus drivers. After that he was on his own en route to sixth place.

Sergio Perez – Having qualified ninth he was unfortunate to be knocked off at the first corner while trying to avoid the Ricciardo/Massa mess. With no Safety Car appearing points were impossible, but he made it back up to 12th.

Max Verstappen – A three-place grid penalty for stopping on the racing line when he car broke down in qualifying seemed harsh given his car could easily be seen by other drivers and there was nowhere he could have stopped which wouldn’t have brought out the yellow flags. That left him 17th on the grid, but within four laps he was 13th and an early first pit stop helped him gain more ground. He got ahead of his team mate in his final sting for ninth place.

Carlos Sainz Jnr – Driving at Suzuka for the first time, and unable to run in the dry on Friday, it was perhaps to be expected that he didn’t make it into Q3. He was trying to get in between the Lotuses when he hit a pit entry bollard, damaging his front wing, and ultimately slipped to tenth behind Verstappen.

Romain Grosjean – Not for the first time this year Grosjean surprised himself by getting into Q3. His race was a straightforward affair to begin with, though he lost a place to Hulkenberg early on. But at the end he was having a hard time with his tyres. “It seems the new Pirelli limits hurt us more than our rivals,” he said.

Pastor Maldonado – Didn’t make it into Q3 but seemed happier with his tyres at the end of the race than Grosjean. Followed his team mate home for useful points.

Marcus Ericsson – Despite being the only Sauber driver with prior experience of Suzuka – and quite a bit of it – it was Ericsson who spun off the track during qualifying. He had another spin during the race. Attempting to run a long stint on hard tyres at the end of the race didn’t pay off and he fell to 14th after being passed by Perez and Kvyat.

Felipe Nasr – Qualified within a tenth of his team mate but pulled into the pits shortly before the end with an unspecified problem having fallen to 17th place.

Will Stevens – A five-second penalty for pit lane speeding would probably have dropped Stevens behind his team mate at the chequered flag even if he hadn’t spun at 130R late in the race, losing the position.

Alexander Rossi – Felt his pace improved during the race and finished ahead of his team mate again.

Who was the best driver of the 2015 Japanese Grand Prix weekend?