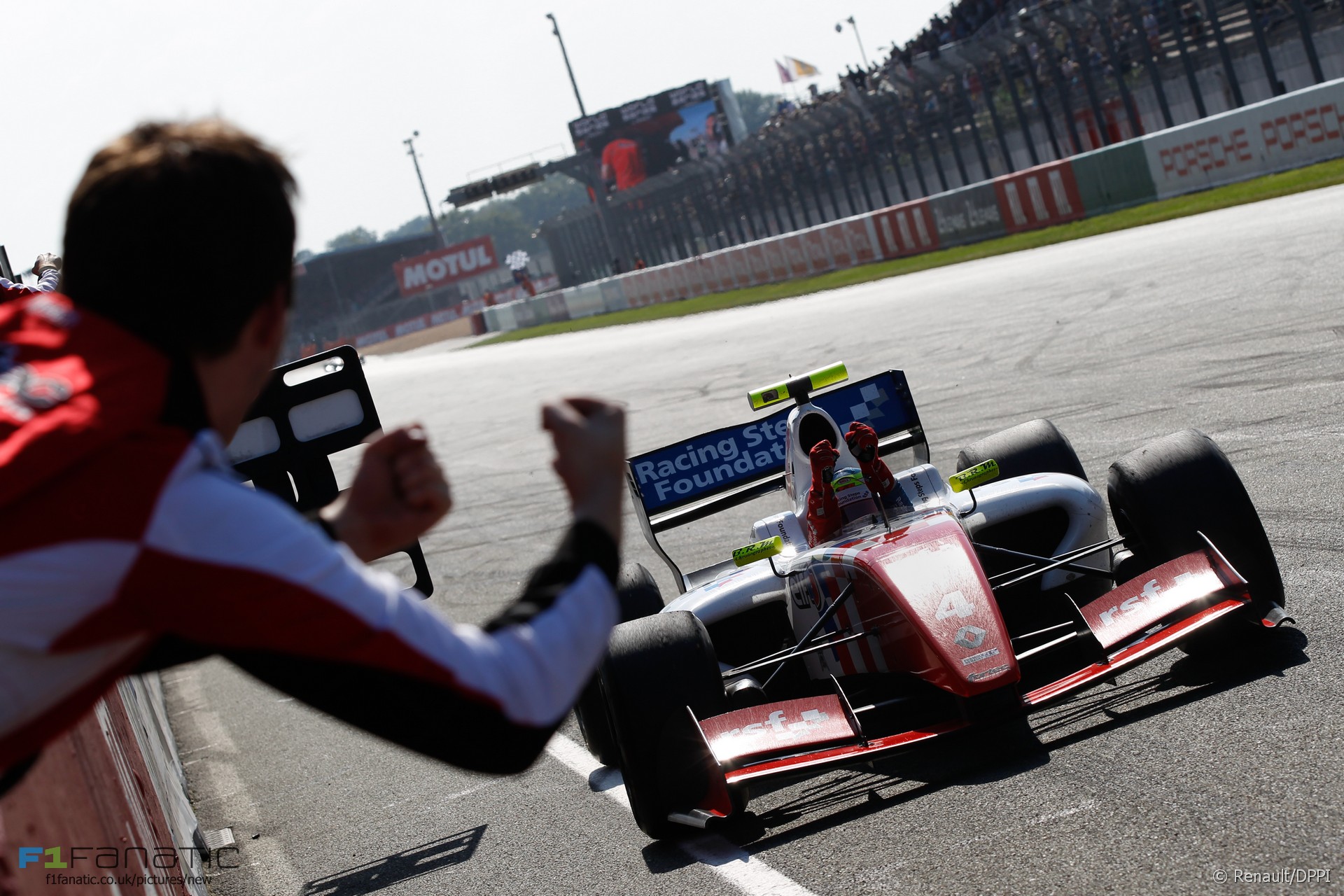 Both the Formula Renault 3.5 and European Formula Three titles were wrapped up this weekend with one round to spare.

Elsewhere the DTM, BTCC and WTCC title fights neared their conclusions, and NASCAR’s Chase for the Cup continued.

The World Karting Championship – now awarded Super License points by the FIA – also concluded, while there was an unusual accident in the French Porsche Carrera Cup Championship.

Oliver Rowland only needed to avoid losing points to Matthieu Vaxiviere in his rival’s home round at Le Mans, and a record-equalling seventh win of the season on Saturday made that at inevitability.

Despite qualifying a disappointing 14th for Sunday’s race, Rowland recovered to eighth which was more than enough to secure the title.

Vaxiviere had finished second on the road to Rowland but a ten-second penalty for one of several off-track excursions left him tenth. The pair made contact at one stage, leaving Vaxiviere with front wing damage and Rowland with a deep gouge in his tyre which, remarkably, held until the chequered flag.

In the second race Vaxiviere pushed Egor Orudzhev hard for the win, but as in Hungary the Russian rookie’s defensive driving proved up to the job and he took his second victory of the year.

Felix Rosenqvist dominated the Nurburgring race weekend much as he did the last two races at the last round in Algarve, by taking pole, fastest lap, and the win in each of the three races.

This – combined with less than impressive results from main rivals Antonio Giovinazzi and Charles Leclerc – was enough for Rosenqvist to seal the title in his sixth year as an F3 driver.

Mercedes driver Pascal Wehrlein moved one step closer to the 2015 DTM title after a third and a fifth place, and now has a 37-point advantage with just 50 available.

Lucas Auer took a surprise pole in race one, but could only manage sixth as Maxime Martin took his first win of the season ahead of title rivals Edorado Mortara and Wehrlein. Miguel Molina was another surprise pole sitter for race two, but unlike Auer managed to hold on to his lead and take a first ever series win, ahead of former F1 racer Paul di Resta Bruno Spengler.

Race one saw the on-form Mat Jackson on pole for the first race, and the Motorbase Ford driver held onto the lead for the entire duration of the race, winning in dominant fashion ahead of Andrew Jordan and Gordon Shedden, and taking pole for race two with fastest lap.

Andy Priaulx and Jack Goff sacrificed their race one results to drop to the back and secure good grid spots for race two. For Priaulx it worked extremely well, jumping to second from third on the grid before later muscling his way past leader Jackson, who later retired with a puncture. Jack Goff and Aron Smith completed the podium after a race long battle.

The entire top ten were reversed for race three, but James Cole – on his first pole position – couldn’t capitalise, eventually being bumped off by Jason Plato. Colin Turkington won to keep his Championship hopes alive, leading home the BMW pair of Rob Collard and Sam Tordoff. After three strong races compared to Plato’s mediocre weekend – ruined by a puncture late in race one – Gordon Shedden heads to the final three races at Brands Hatch with over a win in hand.

The video above is from qualifying as race highlights are not yet available.

Jose Maria Lopez moved within touching distance of defending his title with a win and a third place at Shanghai. Team mate Yvan Muller closed slightly with a second and a win, while Sebastian Loeb completed a Citroen podium sweep in race one, before making it three Citroen’s in the top four in race two, with only Gabriele Tarquini’s Honda in second interrupting a second sweep.

Kevin Harvick led over two-thirds of the race but ran out of fuel with two laps to go, handing victory to Matt Kenseth.

It was business as usual in F1 after the one-off last week in Singapore, Lewis Hamilton storming to victory ahead of Nico Rosberg and Sebastian Vettel, to further extend his championship advantage.

The French GT Tour made its way to Navarra in Spain for the penultimate round of the season, and was accompanied as usual by the French Porsche Carrera Cup series, which for once stole the headlines. During the second race of the weekend, Joffrey De Narda spun and was struck by Jules Gounon (son of ex-F1 driver Jean-Marc), who car rode up De Narda’s bonnet and perched neatly on top of his rival’s car. Both drivers escaped injury and de Narda even managed to win the third race after Mathieu Jaminet took the honours in the first two.

Which of these races did you see, and what did you enjoy? Do you think Formula Renault 3.5 and European F3 produced worthy Champions? Let us know in the comments below.

Next weekend is EuroFormula Open, NASCAR and the WRC from France as the series returns to Corsica for the first time since 2008 with an unusual nine stage format.