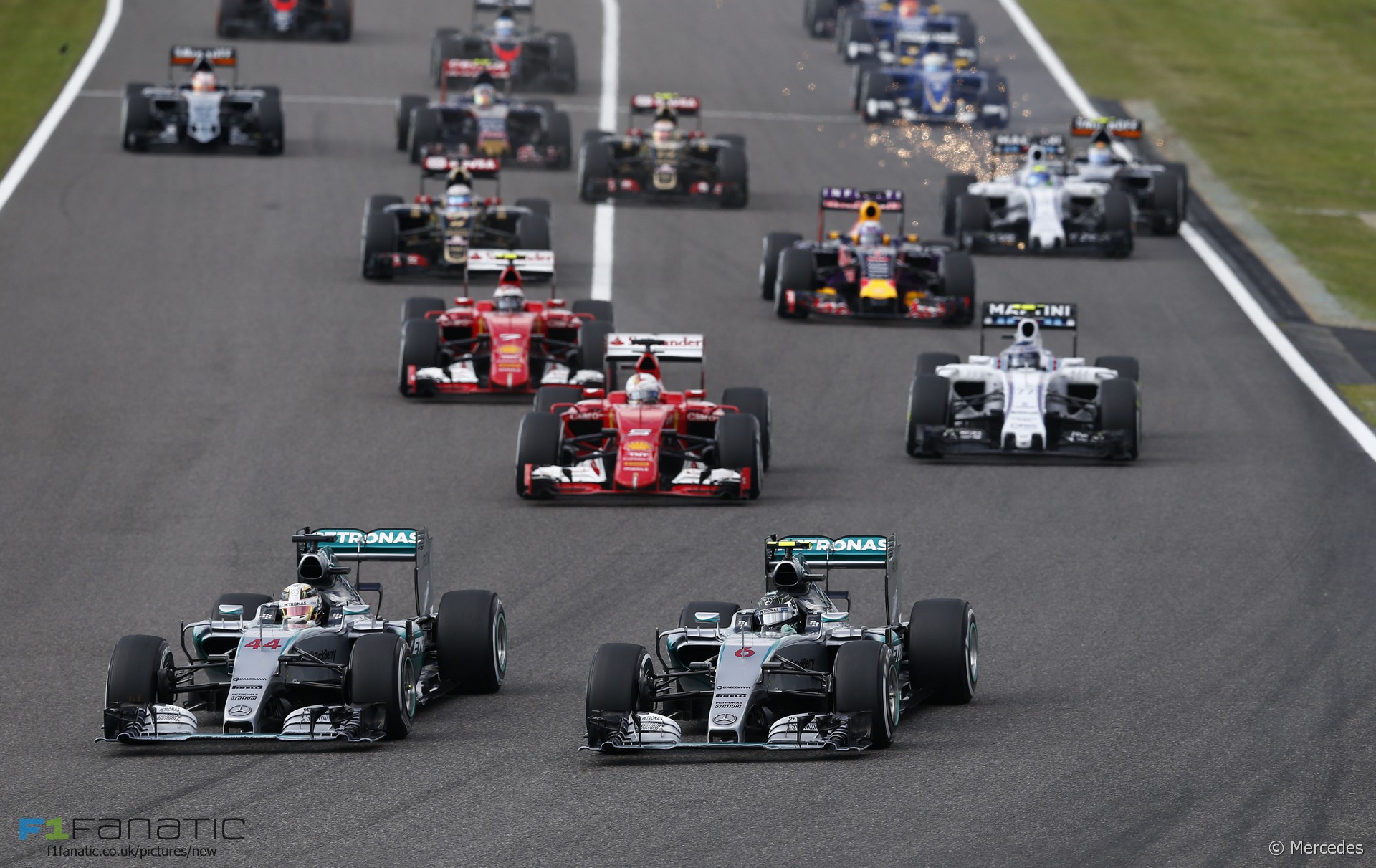 In the round-up: Jean Todt and Bernie Ecclestone are seeking a new low-cost engine package for 2017.

"The news comes despite the idea receiving no support at the meeting of the sport's engine manufacturers in Geneva last week."

"It is understood Honda has received interest from Red Bull and is pondering a deal with the four-time champion team, but has yet to make a decision."

Lewis Hamilton is not a legend yet – even if he equals my record at the US Grand Prix 2015, says Sir Jackie Stewart (The Telegraph)

"In his own, rather different lexicon, Hamilton agrees. 'Legends are people who are in the older generation I feel, people who have retired,' he said. 'I don’t know of any legends at my age.'"

Hamilton: I wish I had done FP1 now (Crash)

"My engineers wanted me to save the tyres for FP2, I wish now that I did the session because I didn't know it would rain so much, but it's okay and we did get some running."

"People in the press wrote that it looked as though I was no longer trying, that I had given up. I had not given up at all, of course, but still the results refused to come."

"The only reason Ecclestone is still permitted to run the sport is that there remain in the paddock a number of significant figures whom he helped to make very rich."

I was listening to local (and bloody good!) Austin radio station @101x this morning but sadly, F1 didn't go down too well.

It was hailed as a "sport for billionaires" and noted mainly for the parties. Could account for the empty seats today.

Let's give technology to the Le Mans racers where the Manufacturer's title is more important and get F1 back to drivers to being the stars.

If a 2.2 litre bi-turbo engine option is permitted in #F1 in 2017 on a cost cap basis I can think of 2 suppliers straight away. Interesting.

If you had the chance to pick the color of our 2016 #F1 #PZero #UltraSoft which would you pick? We’ve prepared possibilities RT your choice!

Err, not to overplay this, but the roof of our set just collapsed under the weight of the water… (!)

Not a lot of you were thrilled at the news Jolyon Palmer will race for Lotus next year:

That’s rather underwhelming.. Good for Joylon, but I think most F1 fans can name 3 to 5 drivers that would have probably been better picks. Then again, if he has paid 250.000 per practise session, I’d imagine he brings considerable budget to a team that might not be competitive until after a hefty Renault investment.
Nick (@npf1)

Honda scored their first victory as an F1 constructor 50 years ago today. Richie Ginther triumphed in the Mexican Grand Prix which was also the first victory for F1’s most successful tyre manufacturer, Goodyear, which by the time of its withdrawal in 1998 had won 368 races.

Also on this day in 2010 Fernando Alonso looked on course for a third world championship title after winning the inaugural Korean Granf Prix as both Red bull drivers failed to score: