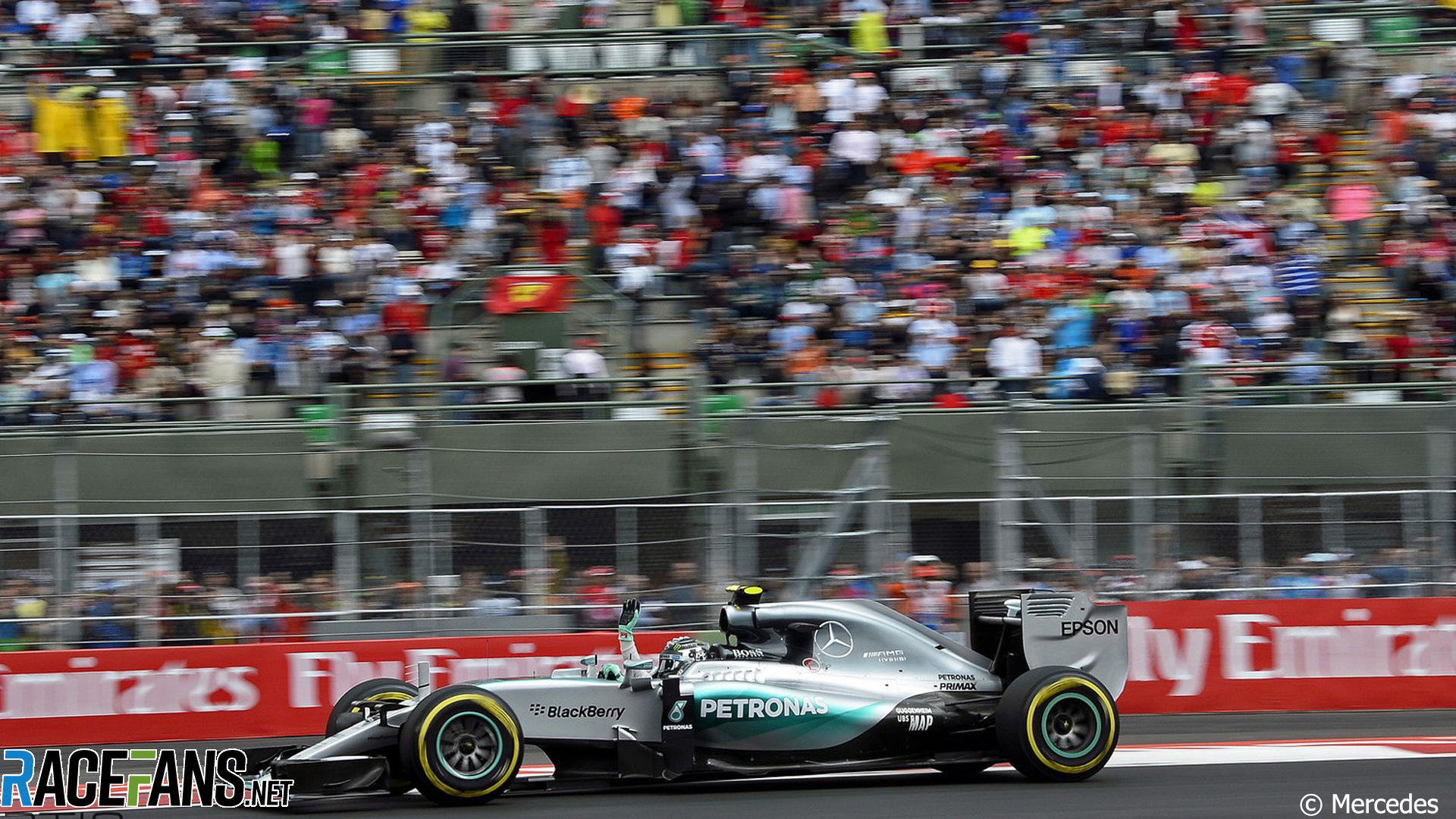 Before the Mexican Grand Prix weekend began, Mercedes predicted the best lap time would be around 1’19.500.

Nico Rosberg proved the team are as hot on their simulations as they are on the track by setting pole position for the race with a best time just two hundredths of a second quicker than the team had predicted.

Rosberg’s fourth pole position in a row relegated team mate Lewis Hamilton to second place once again. Sebastian Vettel was left to fly the flag for Ferrari on his own after a technical problem sidelined Kimi Raikkonen in Q2.

With Jenson Button failing to get out of his garage after a string of power unit problems in practice, only four further drivers would be eliminated during Q1. One of those might have been Kimi Raikkonen had it not been for rapid repair work by his mechanics after his final practice breakdown – he thanked his crew as he headed out during the first stage of qualifying.

Raikkonen duly secured his progression as did Sebastian Vettel, who set the second-fastest time behind Rosberg. However while they used soft tyres to set their best times, Hamilton saved a set of the harder rubber, though he was keen to go out on the soft tyres.

Felipe Nasr failed to make the cut after a scruffy lap in his Sauber – team mate Marcus Ericsson was over half a second faster. Completing McLaren’s misery, Alonso also failed to progress into Q2, his engineer saying the track conditions had “moved towards” their rivals.

The Manor pair went no further as usual, Alexander Rossi’s engineer congratulating him as he beat his team mate by a quarter of a second. Will Stevens had to pit with a problem at the beginning of the session but made it out in time for a final run.

When Hamilton did put a set of soft tyres on, he immediately went fastest, topping the second part of qualifying by two-tenths of a second and becoming the first man of the weekend to lap the circuit in under 80 seconds. Vettel edged Rosberg for second place by a few hundredths of a second.

However Raikkonen’s participation in qualifying came to an end shortly after he spun at the first corner. He reported a problem with his brakes and returned to the pits.

Romain Grosjean lost his hold on a place in the top ten in the final moments of qualifying as Verstappen, fishtailing with oversteer at the final corner, edged him out. The unhappy Lotus driver had lost time in the final sector after posting competitive first and second sector times.

The Mercedes drivers led the field out as Q3 began. The low-grip track meant two laps were necessary to get the best time out of the tyres, and on the first run Rosberg nailed it twice, ending up 0.188s ahead of Hamilton.

Vettel hung back from the initial run, not wanting to be snookered into backing off in the final sector, ruining his tyre preparation. The tactics paid off: he got within two-tenths of a second of Hamilton on his run.

These initial times proved decisive as the remaining drivers struggled to improve on their final runs. Hamilton set a personal best time in the middle sector but skidded off at turn 12 and aborted his last run. Vettel also admitted to over-driving his car on his final effort.

The Red Bull drivers completed the top five, Daniil Kvyat a mere thousandth of a second ahead of Daniel Ricciardo having lost several tenths of a second in the final sector.