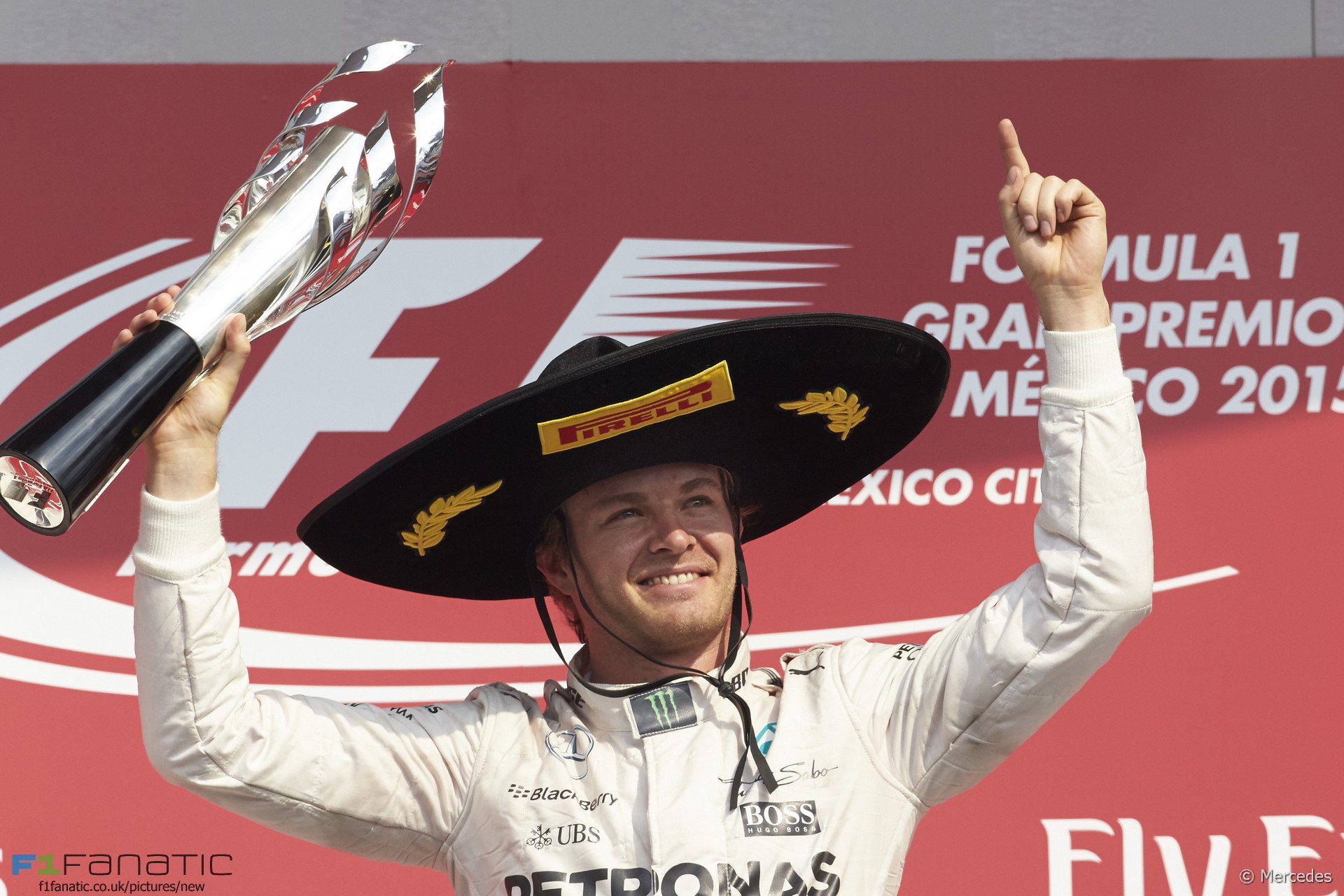 Nico Rosberg took his fifth pole position of the year in Mexico but converted it into victory for just the second time this season. He also took the fastest lap, giving him the first ‘hat-trick’ of his career so far.

Rosberg’s 12th career victory which is an interesting milestone for the son of 1982 world champion Keke Rosberg. He now has as many wins as 1980 world champion Alan Jones, Carlos Reutemann and Mario Andretti. These were his father’s predecessor and first two team mates at Williams in his championship-winning year. It’s also Jones’s birthday today – he’s 69.

Pole position number 20 puts Rosberg level with Damon Hill. This was Rosberg’s fourth pole position in a row – he’ll set a new personal best if he taken another in the next race at Interlagos.

Rosberg’s win means Lewis Hamilton can no longer equal the record for most victories in a season this year. However the tenth one-two for Mercedes means they can beat their own record from last year if they repeat the result in the final two rounds.

Had the Mercedes drivers enjoyed perfect reliability in the races this year, the drivers’ championship would probably still be open. Assuming Rosberg had finished third at Monza, Hamilton had beaten him to fourth at Singapore and Rosberg had stayed ahead at Sochi, Hamilton would have a 40-point lead with two races remaining.

How many points Ferrari’s second driver has scored as a percentage of the other driver’s haul:

Kimi Raikkonen’s fifth no-score of the year means he is now likely to end the season with less than half of his team mate’s points tally. This will be the fifth year in a row this has happened at Ferrari (see table), continuing a trend which began when Felipe Massa was at the team.

Despite posting his first non-classification of the year, Sebastian Vettel has still covered the most racing laps of any driver this year, and is the first to pass one thousand. The Lotus pair have the least of any drivers who have entered every race: Pastor Maldonado 707 and Romain Grosjean 732.

McLaren’s miserable season continued as Jenson Button amassed a record 70-place grid penalty after moving onto his 12th power unit components of the season – three times more than the original allocation of four per driver (later increased to five for newcomers Honda).

McLaren drivers have now received a total of 285 places of grid penalties over the course of the year. The other nine teams combined have had 336, including zero for Mercedes and Williams.

Along with his team mate Fernando Alonso and Raikkonen, Button was one of three world champions occupying the last three-places on the grid. The first three retirements in the race were also all champions: Alonso, Raikkonen and Vettel.

Nico Hulkenberg joined Raikkonen on his second reprimand of the year, leaving both at risk of a ten-place grid penalty if they pick up a third.

Have you spotted any other interesting stats and facts from the Mexican Grand Prix? Share them in the comments.