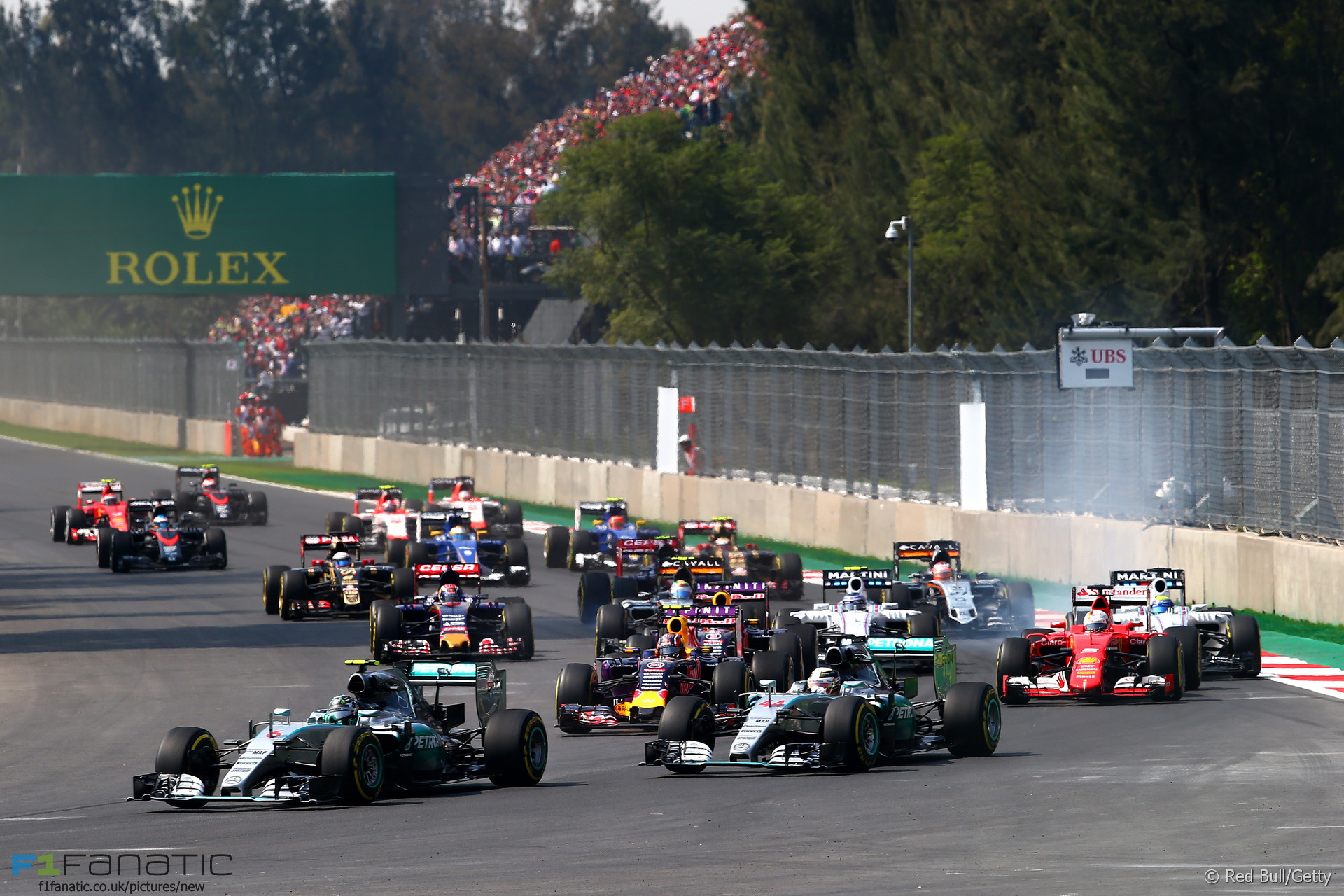 Which F1 driver was the best performer during the Mexican Grand Prix weekend?

Lewis Hamilton – Rosberg had the edge on him in qualifying for the fourth race in a row, but Hamilton indicated his set-up was more race-orientated. However being snookered behind Rosberg from the start gave him little opportunity to demonstrate whether that was the case. He told his team the decision to bring him in for his final pit stop was “wrong”, believing the tyres would last, but deciding against disobeying his team and putting his theory to the test.

Nico Rosberg – Despite missing time in first practice when his brakes caught fire Rosberg took control of proceedings from then on, heading the two remaining practice sessions and claiming his fifth pole position of the year. The small but important margin he built over Hamilton was wiped out by the Safety Car, but despite his team mate’s best efforts Rosberg always had an answer.

Daniel Ricciardo – Largely left his car settings alone in qualifying as he tried to make sense of the fluctuating track conditions. Under pressure from Williams with their high straight line speeds, Red Bull pitted Ricciardo later than the FW37s giving him a tyre advantage which he wielded to brilliant effect when he dived past Massa. However he was unhappy to use another set of soft tyres when the Safety Car gave them a free pit stop – he wanted to give mediums a try.

Daniil Kvyat – His engineer called his qualifying run a “solid effort”: he pipped his team mate by a thousandth of a second despite losing four-tenths in the final sector. Kvyat won further praise from Christian Horner after the chequered flag, having been on course for a podium until he was easily passed by Bottas in the first DRS zone.

Felipe Massa – “A terrible lap” reflected Massa after understeering off at turn seven on his way to seventh on the grid. Couldn’t follow his team mate past either of the Red Bulls in the race, losing out to a lunge from Ricciardo, and admitted afterwards he had struggled for rear grip.

Valtteri Bottas – A suspension breakage ruined his race in the USA, but in Mexico his contact with Raikkonen gave Bottas cause to thank the solid construction of his Williams. Having run behind both the Red Bulls at the start he beat them to the final podium position. He did so by making an early first pit stop, muscling his way past Raikkonen, jumping Ricciardo in the pits and out-dragging Kvyat at the restart.

Sebastian Vettel – Was within two-tenths of Hamilton in qualifying and believed he could have been closer. His race was a nightmare, however: first-corner contact with Ricciardo gave him a puncture, after which he spun twice. “The last one obviously ended my race and I am not proud of it,” he confessed afterwards.

Kimi Raikkonen – His problems began during final practice, which was disrupted by a power unit problem. Although quick work by his mechanics got him onto the track in time for Q1, a brake problem ended his running in Q2, and subsequent penalties relegated him to 19th. From there he worked his way past the slower cars and was on course for a solid points finish when Bottas appeared in his mirrors with fresh tyres. Raikkonen cannot have been unaware Bottas was alongside him at turn five, so exactly where he thought the Williams would go when he turned in is unclear.

Fernando Alonso – Pointed to McLaren’s promising second and third-sector times after being eliminated in Q1. There was no positive spin to be found for his race, however, which ended after one lap. “We had an MGU-H rotation speed problem,” he explained afterwards. “We didn’t have enough time to replace it, so we were left with two options: to race or not to race. We went for the first option, and tried to do as much as we could, out of respect for the amazing fans here in Mexico.”

Jenson Button – The nadir of a particularly bad season? Power unit problems throughout practice meant he couldn’t take part in qualifying and racked up a record 70-place grid penalty. McLaren’s straight-line speed deficit was even worse than usual in the thin Mexican air, and Button came home a distant 14th.

Nico Hulkenberg – Following a misunderstanding with his race engineer Hulkenberg lined up tenth, five-hundredths of a second off his team mate. They diverged on strategy in the race, Hulkenberg making a two-stopper which turned out to be the better approach.

Sergio Perez – Force India expected better conditions at the end of Q3 and sent both drivers out then – only to discover the track had actually deteriorated. Perez narrowly won the intra-team contest this time. In the race he made two crowd-pleasing passes in the stadium (one aided by Sainz being told to let him past) but when the Safety Car came out Force India mistakenly believed they could gain him two places by not pitting. That didn’t pay off, but he held his position despite ending the race on 53-lap-old tyres.

Max Verstappen – Headed first practice, crashed at the start of the second, but was Toro Rosso’s only representative in Q3. He managed his cooling-troubled car to ninth place in the race.

Carlos Sainz Jnr – Was running well in the race until he picked up a tyre vibration after the Safety Car period and fell out of the points.

Romain Grosjean – Terse radio messages throughout practice and qualifying indicated Grosjean’s deepening dissatisfaction at Lotus. He was consistently strong through the first two sectors but in sector three only the Manors were slower than him in qualifying. Despite his downforce deficit, Grosjean brought the car home for a point.

Pastor Maldonado – Lined up behind Grosjean as usual and kept it clean in the race – despite a brief off at turn 12 – and finished right on his team mate’s tail, albeit aided somewhat by the Safety Car.

Marcus Ericsson – Having been plagued with braking problems caused by bottoming in practice, Ericsson nonetheless beat Nasr to be the only Sauber in Q2. He had more braking trouble in the race, and points never looked likely.

Felipe Nasr – Struggled with the low-grip surface and failed to progress beyond Q1. He wasn’t able to keep on top of his brake problem in the race and when the Safety Car came out they soon cried enough.

Will Stevens – The battle between the Manor pair was one of the more interesting features of the race. Stevens was ahead most of the way but he wa sunahppy with his switch to a one-stop strategy having been happier on the medium tyre.

Alexander Rossi – Got back onto the soft tyre at the end of the race and demoted his team mate to take 15th at the flag.

Kvyat deserved to be on the podium and would have been had it not been for his under-powered engine. That said, I can’t begrudge Bottas his top-three finish, especially after his forceful pass on Raikkonen.

However I was most impressed this weekend by Rosberg. Coming off the back of three consecutive pole-to-defeat races, he needed this result and had pressure from his team mate all the way. If this is the kind of performance we can expect from him in the future, 2016 should be much more competitive.

Who was the best driver of the 2015 Mexican Grand Prix weekend?