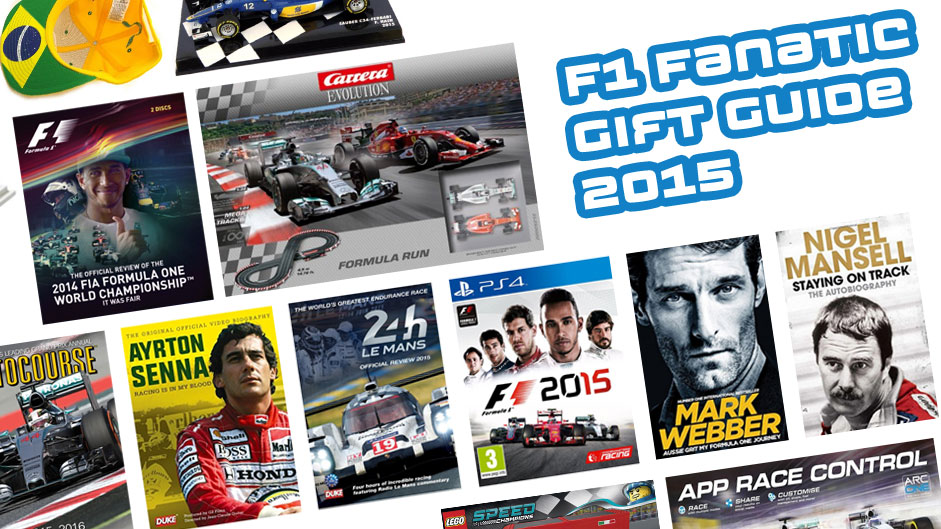 Whether you’re seeking a gift for an F1 fan or looking to treat yourself to a Formula One video or book, F1 Fanatic has got over a hundred recommendations to suit budgets of all sizes.

And with the Black Friday sales event kicking off tomorrow (November 27th), there are some extra bargains to be had on race tickets, team merchandise and much more.

Support F1 Fanatic when you shop with Amazon

Whatever gifts you’re buying and whenever you’re buying them, if you’re shopping with Amazon please consider supporting F1 Fanatic when you do.

All purchases made via the search boxes below will contribute towards F1 Fanatic at no cost to you.

You can also find these search forms via: http://www.f1fanatic.co.uk/amazon. You can also Support F1 Fanatic when you shop with Amazon USA.

The official Formula One season review video is essential viewing for every F1 fan, particularly as it often contains lots of previously unbroadcast footage. This year’s video is due out on December 21st.

Complete your collection with videos from earlier seasons.

Five years on from the excellent Senna movie, the re-release of 1992 documentary “Ayrton Senna: Racing is in my Blood” gives an eye-opening insight into how he was viewed before his untimely death in 1994. It’s among the pick of the video releases for Formula One fans this year.

And if any of the recent F1 cinema offerings passed you buy, now’s the time to catch up. Senna is unmissable, Rush is highly recommended, and even the flawed 1: Life at the Limit has its moments.

Review all the action from this year’s Le Mans 24 Hours which featured an F1 driver in the victorious car for the first time in 24 years. That plus more reviews of other racing disciplines can be found below.

In their sixth year producing the official Formula One game, Codemasters brought the franchise bang up-to-date for the latest platforms as well as adding the new circuits and other changes for 2015. You can also play with all the 2014 content as well.

Licensing restrictions means the F1 game only features grand prix cars, so if you’d like to race something else there’s a few other suggestions below – plus a selection of steering wheels.

It’s been the best year for new Formula One book releases for some time: Mark Webber and Max Mosley penned autobiographies while new books appeared on world champions Alain Prost and Nigel Mansell.

But before you clear space on your bookshelves or e-reader, check the reviews to find out which of these deserve a place your wish list.

Looking for a guaranteed quality read? These books all scored a maximum five-out-of-five when reviewed by F1 Fanatic:

While every edition bears the image of the latest Formula One world champion on the cover, inside you’ll find coverage of the world of four-wheeled motorsport. But the majority of each annual is given over to in-depth coverage of the grand prix season and superb photography.

An F1 car contains an average of 80,000 individual components and teams replace them quickly. These increasingly find their way into all manner of distinctive gift items from wallet to clocks.

Memento Exclusives sell a wide range of items built from ‘upcycled’ F1 car parts – some at pocket money prices and others costing several thousand pounds. Here’s a selection of their products:

As drivers now keep the same number from year to year, team merchandise doesn’t date as quickly as it used to. And there are some great bargains to be found on team kit at the end of a season.

You can buy tickets for races on the 2016 F1 calendar via the links below. Note the calendar is still subject to change and ticket options for the new 2016 European Grand Prix in Azerbaijan have not yet been announced.

If you have any questions about going to a particular race, do post them in the forum for each race where other readers who have been to each event may be able to help.

NB. Tickets may not be available for all races yet.

As last year the Circuit of the Americas is running a special Black Friday deal allowing you to buy a general admission ticket for six races including the Formula One, World Endurance Champions and Moto GP rounds for $249. The tickets go on sale on Friday at midnight until the following Monday. The Circuit Gilles Villeneuve is also selling tickets at half price this weekend, meaning a general admission ticket can be had for as little as $23.

Here’s a selection of the 2015 grid in model form – including Red Bull’s test car in its black-and-white livery:

If you didn’t manage to win one of the brilliant LEGO Speed Champions sets in the F1 Fanatic Predictions Championship, it’s surely time to treat yourself. The Ferrari F1 truck with racing cars and the McLaren pit stop set are highlights of this officially-licensed range. If you’d prefer something a little more advanced, check out the grand prix racer and Le Mans-style Technic sets.

A Mercedes versus a Mclaren might not be a very close competition in F1 these days but it’s sure to come across well in slot car form. The new App Race Control set from Scalextric features detailed models of each and their latest racing system which even updates your Facebook and Twitter profiles with your race statistics. Alternatively you can recreate some of this year’s better races with Carrera’s Formula Run set which features a Mercedes and a Ferrari.

Do you have any F1-related gifts in mind for the festive season? Have you spotted any great deals on grand prix gear you want to share with other F1 Fanatics? Let us know in the comments.

F1 Fanatic earns a commission on products sold via the links to our affiliate partners above, however you are not charged any extra.