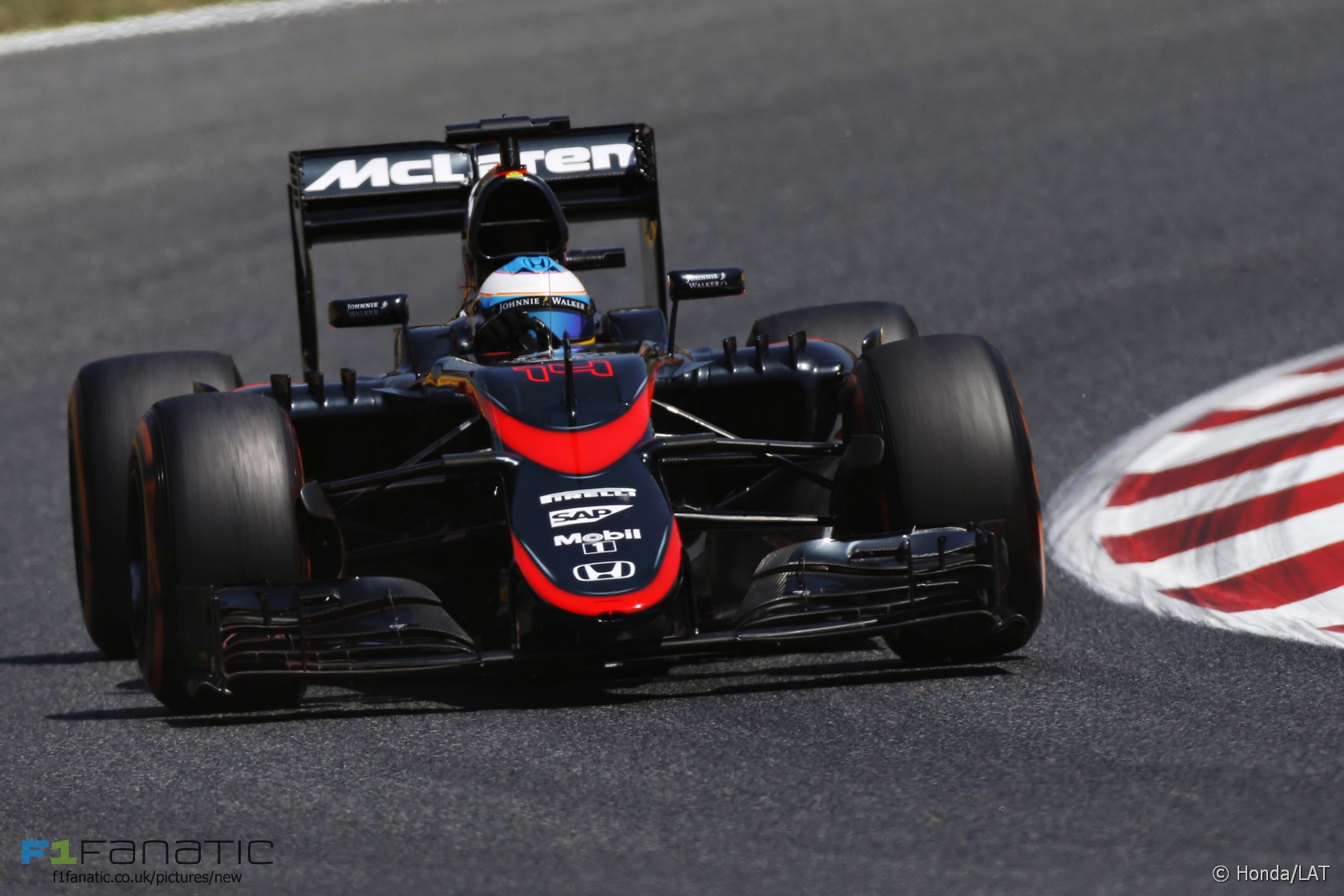 Fernando Alonso was second in the rankings last year and there’s no question his lower place this season is almost entirely because his car rendered him incapable of competing with his rivals this year.

His season began with a crash which ruled him out of the first race and ended with him telling his team he’d rather park the car than press on in vain. Although he insists McLaren represents a better bet for the long-term than Ferrari, by the latter stages of the season it was clear he’d had enough of being passed with ease by drivers in more powerful cars.

The number 14 McLaren could frequently be spotted in some unrealistically high position at the end of the opening lap, courtesy of one of Alonso’s blinding starts (he gained more places on lap one than anyone), only to inevitably slip behind most of the other runners once the DRS zones were activated – if not before then.

In between repeated retirements due to car problems – in Malaysia, Spain, Monaco, Canada, Italy, Singapore and Mexico – there were occasional high points. Hungary was vintage Alonso, producing the team’s best result of the year with a fine fifth place. His qualifying lap in Japan was exceptional and he briefly got up to ninth at the start before the inevitable ‘regression to the mean’ and, on this occasion, pointed radio calls about his “GP2 engine”.

As the season came to a close Alonso’s supply of patience had clearly been exhausted, and with more than just his car. Jenson Button proved a more testing team mate than he has had at any time since he last drove for McLaren, and there were a few costly errors along the way – his lap one collision in Abu Dhabi, for instance – but it wasn’t hard to understand why Alonso felt his efforts were wasted in 2015.

Malaysia – In his first race back after injury Alonso seemed to have a pace advantage over Button during practice, though he was pipped by his team mate in qualifying. Although an ERS failure ended his race well before the chequered flag, there was some consolation to be drawn from the fact he ran as high as eighth before then.

China – Beaten by Button in qualifying to start 18th, but jumped his team mate at the start. Benefitted with a couple of positions after Button and Maldonado collided, but was too far off from the top ten to have any chance of points. Seeing the chequered flag for the first time this season will have been the main target achieved for this weekend.

Bahrain – There was a sharp contrast between the two sides of the McLaren garage in Bahrain. While Button toiled in vain, Alonso gave cause for cheer by taking the MP4-30 into Q2 for the first time, then finishing 11th in the race. Superficially that was no more than Button achieved in Melbourne – but this time there were six cars running behind the McLaren instead of none.

Spain – Had an inconsequential spin at the end of first practice. In qualifying he got his car through Q1, but his race came to an end with brake trouble – unable to stop his car at his pit box, Alonso’s front jack man had to dive for cover as the car missed its marks.

Monaco – His car broke down in Q2 and the race, but in between the two he managed to pick up a penalty for tangling with Hulkenberg at the start.

Canada – Missed most of final practice while his power unit was changed, but despite the Honda’s lack of power he got into Q2 where he claimed 13th on the grid. However he lost places to several rivals early on and was clearly unhappy when told he needed to save fuel. Capping his misery, the car failed soon afterwards.

Austria – Both McLaren drivers accumulated comical 25-place grid penalties. But Alonso, running the team’s new aerodynamic kit including a heavily revised and shortened nose, got into Q2. The upshot of that was he only had to take a drive-through penalty in the race as he could only serve a small portion of his grid penalty. He started well enough that he was up with Raikkonen turn two – unfortunately the Ferrari driver then dropped it into the barriers, taking Alonso with him.

Britain – Both McLaren drivers made it to the team’s home race without incurring more penalties for changing power unit parts, though Alonso came close as the team was reprimanded for accidentally fitting one of Button’s tyres to his car. He spun trying to avoid the Lotus drivers at the start and inadvertently ended Button’s race. The high rate of retirements helped him salvage a point, however.

Hungary – At a track which minimised the McLaren’s shortcomings, Alonso looked set to take full advantage until his car let him down in qualifying. He jumped up to 12th at the start but was passed by Verstappen shortly afterwards. The pair were destined to finish in that order after Alonso made a canny switch to soft tyres during the Safety Car period and muscled past the other, ailing Toro Rosso of Sainz.

Belgium – Having missed almost all of final practice due to yet more technical problems, Alonso lined up behind his team mate. He made the most of the start – rising from last to 14th – and kept in touch with the Saubers for the first half of the race before dropping back, finishing 13th.

Italy – McLaren split the strategies between their two drivers. Alonso kept his soft tyres for the end of the race and was shaping up for a pass on Button when his Honda let go.

Singapore – On Friday Alonso said eighth was a fair reflection of the team’s pace, but come Saturday he was no longer convinced they were quick enough for a place in the top ten, even if Q2 hadn’t been disrupted by a yellow flag. With cars in front hitting trouble points were definitely possible until his gearbox failed.

Japan – What Alonso said during the race received much more attention than how he performed, which is a shame because he drove superbly. He was deservedly proud of a qualifying lap which came within half a second of getting the McLaren into Q3 despite a 16kph straight-line speed disadvantage. A great start got him up to ninth – and then the faster cars blasted past him on the straight. His “GP2” comments were not without justification.

Russia – Ran new engine components on Friday which led to an inevitable grid penalty for the race. Made his trademark speedy getaway – climbing briefly to 13th – before being passed with predictable ease by the likes of Sainz and Grosjean. After the Lotus driver crashed Alonso put on a set of super-soft tyres for an impressive, 40-lap haul to the chequered flag. He took one too many liberties at turn 16 on the way, however, and despite a warning picked up a five-second penalty for violating track limits, which dropped him out of the points.

United States – Running McLaren’s new engine, Alonso started ninth partly thanks to others’ penalties, but his race was ruined by Massa at the start. A long 30-lap run on softs at the end left him vulnerable to those who pitted but it was a developing problem with his engine which finally saw off his chance of points.

Mexico – Pointed to McLaren’s promising second and third-sector times after being eliminated in Q1. There was no positive spin to be found for his race, however, which ended after one lap. “We had an MGU-H rotation speed problem,” he explained afterwards. “We didn’t have enough time to replace it, so we were left with two options: to race or not to race. We went for the first option, and tried to do as much as we could, out of respect for the amazing fans here in Mexico.”

Brazil – Headed to Brazil hoping for an end to his recent reliability problems – and got the exact opposite. His car broke down in practice and again during qualifying, before he could set a competitive time. Frustrated by his team’s strategy during the race, he at least saw the chequered flag this time.

Abu Dhabi – Ninth in second practice may have raised expectations too far – they came crashing down on Saturday when he dropped out of qualifying in 17th place with a puncture. Alonso was very unhappy with the penalty he received for his lap one collision with Maldonado, triggered by an incident with Nasr, but the replays appeared to support the stewards’ view that Alonso caused the contact with Nasr in the first place. A late switch to super-softs brought some cheer – and the third-fastest lap time.

He clearly is too good for this car, but he has mostly himself to blame and some complaints were out of place.
@Fixy

What’s your verdict on Fernando Alonso’s 2015 season? Which drivers do you feel he performed better or worse than? Have your say in the comments.