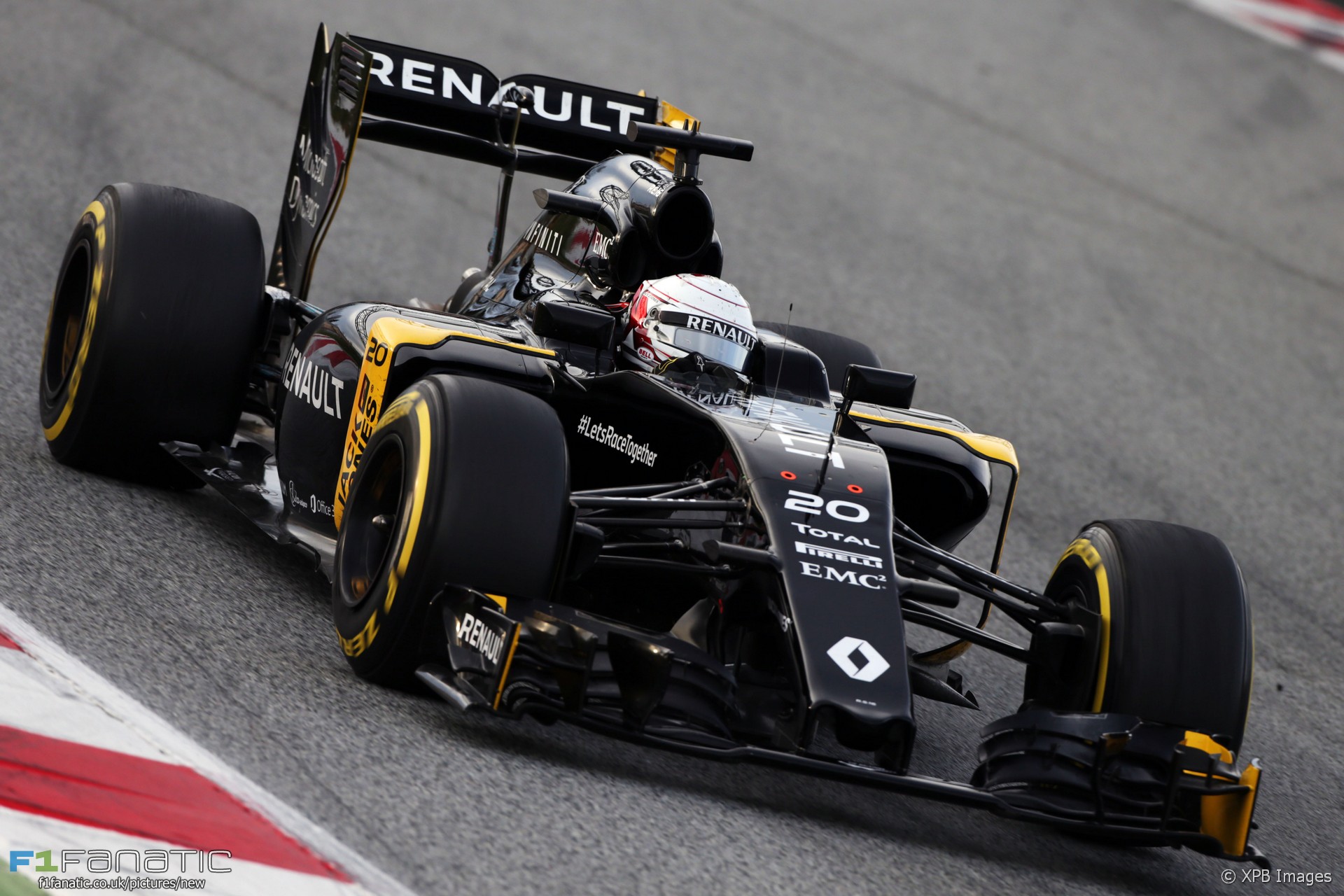 Renault is back as a full manufacturer team. However the deal to take over Lotus was done late in the day, which affected their preparations for 2016.

Amid uncertainly over the future of the team at the end of last year the team initially pursued two different design directions for 2016. One prepared for the arrival of Renault and the other was based around keeping a Mercedes power unit in case the Renault deal fell through.

This has inevitably meant the team’s 2016 car is closely based on its predecessor. And while the team now enjoys the financial clout of full manufacturer support, it has huge gains to make with its power unit.

The engineers in Viry claim to have found half a second of performance from the power unit. There is undoubtedly plenty more performance for the team to unlock, but a key question in the year ahead will be how soon it switches its focus to the planned regulations overhaul in 2017.

There have been only a few developments around the front end of the car. The new front wing and new nose they tested late last year have been united for 2016, both of which resemble Mercedes concepts.

The nose is unique – a halfway-house between the short and narrow route favoured by Mercedes and the popular thumb-tip design. This has resulted in a thin stub to the nose and wider mounting pylons that are contorted to shape the airflow as it travels towards the splitter.

A pelican beak shape has also been formed underneath the nose to prevent unwanted turbulence when the car is in yaw. Flow visualisation paint runs during testing have shown very good results and that the concept is working as it should.

Beneath the nose are a pair of turning vanes which follows what Red Bull has done in recent years. While the other teams appear to be following Mercedes’s design, Renault have continued to evolve their existing platform.

These large curved vanes are split into two but are still joined together thanks to the curvature of the footplate. A horizontal vane connects the two together to condition airflow underneath the chassis as it is divided to each side of the car.

The triple-inlet layout from 2015 is again evident on the car for this year. The central aperture feed the turbocharger’s compressor, before the air is cooled in the intercoolers housed in the sidepod and taken in by the plenum for the internal combustion engine.

The main sir intake is supplemented by a pair of smaller inlets on either side. Last year these stretched towards the back of the car and joined together, feeding a radiator sat above the gearbox. This appears to have been retained, albeit now for a Renault power unit.

The bodywork has received minor attention, although it is hardly surprising to see such a conservative approach to this area given the late power unit change.

The profile of the sidepod’s shoulders have been rounded off and cut inwards slightly at their base. A larger undercut in the bodywork will help guide airflow towards the top of the diffuser at the centre of the car where there are a number of aerodynamic devices that extract more performance from the floor. Expect Renault to become more aggressive with this design as the season progresses.

Around the cockpit the turning vanes and airflow conditioners are of the same specification as 2015, including the unique boxy rear view mirrors. The RS16 also carries a set of serrated bargeboards. Mercedes introduced their own version of these in testing however this team experimented with it previously when it was Lotus.

Although the Renault power unit still requires the most cooling out of the four engine suppliers, the back end of the car has been tapered in nicely and has surprisingly small outlets at the rear. Renault have also raised the gearbox further, so the effect of reduced bodywork around the back end is simplified.

Ahead of the rear tyres Renault have opted for a combination of the multi-slotted floor Ferrari devised late last year and the common L-shape. Rather than carbon fibre the floor is metal and is designed to displace the turbulence generated by the rear tyre away from the side of the diffuser.

Given that it is not too hard to stitch in new carbon fibre panels into the floor (which is often done between race weekends due to minor floor damage) it is surprising to see the slots manufactured from metal.

The rear wing assembly is all-new for 2016. Notably the endplates and central mounting pylon are a major departure from the previous designs. The pylon is particularly distinctive as Renault is the only team to prefer a single wastegate exhaust instead of two.

The wastegate pipe is sat above the main outlet, with the pylon forming an inverted-Y shape as it splits to wrap around them. From a packaging perspective this makes a lot of sense as the bodywork around the exhausts can be closed in.

However a clear drawback of the vertically stacked pipes will be cooling, especially when the car runs in hotter climates. The rear cooling apertures will have to be flared out as they cannot be opened upwards like the ‘Mickey Mouse’ layout offers. Renault have limited themselves slightly here.

Red Bull, the only other team using the Renault power unit, have gone down the most common avenue for exhaust positioning. The reasons behind this decision will surely emerge as the season goes on but it is good to see Renault doing something different as their quest for F1 supremacy begins.