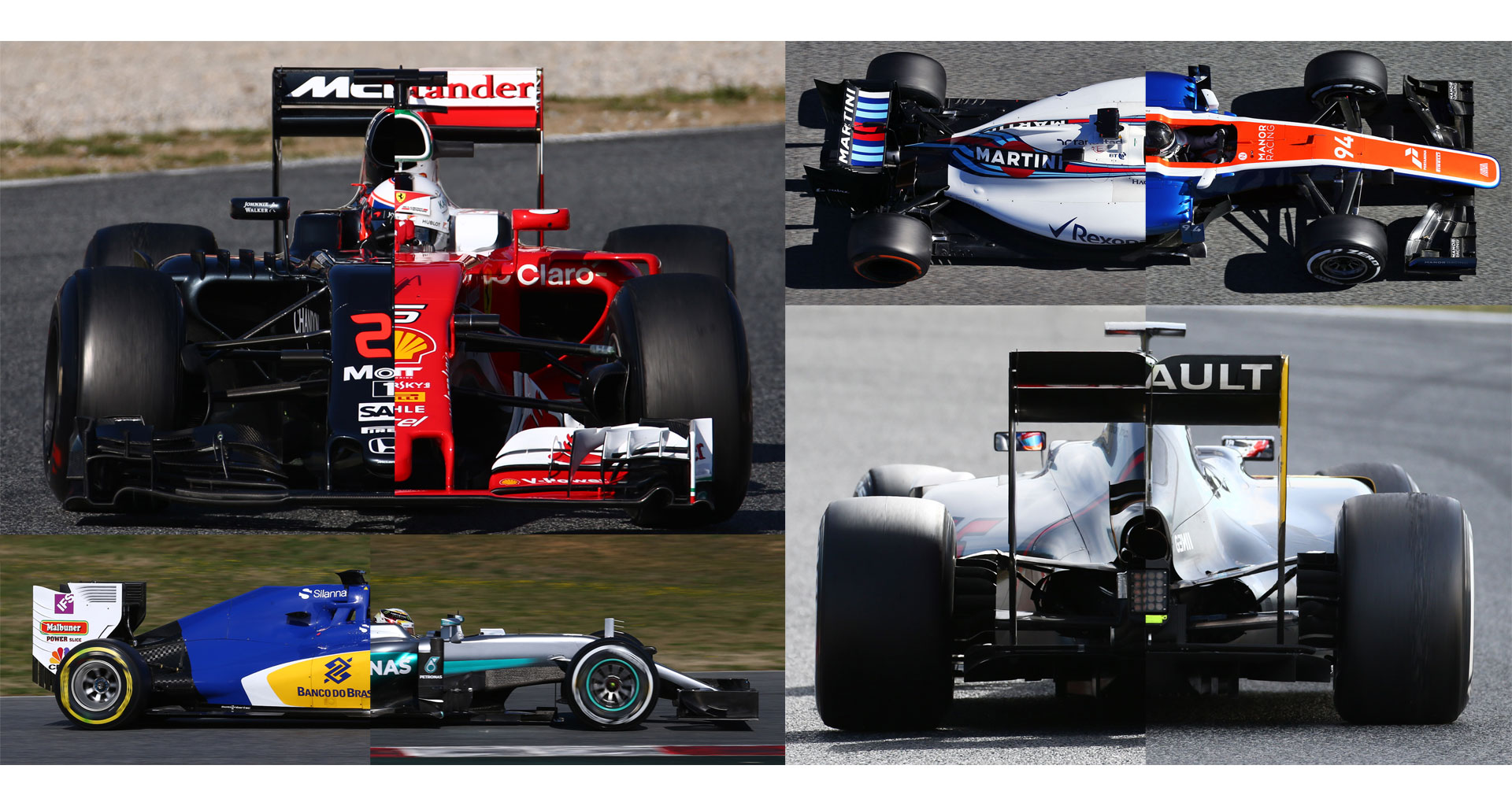 It’s often said that today’s Formula One cars are so similar that it would be hard to tell the difference between them if they were all painted the same colour.

It isn’t true, however. Each team approaches the rules its own way and a close look reveals their different solutions to the same challenges.

Get a better impression of how each team has tackled the rules this year using the interactive images below to compare all 11 of this year’s cars from four different angles.

Ferrari has followed the trend for a short nose with a ‘thumb tip’ which many of its rivals including Red Bull and McLaren had already embraced. However pace-setters Mercedes continue to shun this approach in favour of a slimmer nose design, one which Renault has also adopted.

Force India’s interpretation of the strict nose regulations has led them to a unique twin-vented solution. Manor, however, persists with a long nose which extends far beyond the front wing.

The most obvious change at the rear of the cars for 2016 is the revised exhaust arrangements. In an effort to increase the noise produced by the engines, teams must now separate the wastegate pipework from the main exhaust. With the exception of Renault, all the teams have added a pair of wastegate exhausts.

Here too Mercedes have a unique solution, clustering their three exhausts together, while the other nine teams with dual wastegate pipes have opted for an ‘inverted Mickey Mouse’ arrangement. Most of the teams ran small ‘monkey seat’ wings above the exhausts during testing with a few exceptions.

Red Bull established the trend of running the car with a lot of rake in order to bring the nose closer to the ground and make the front wing work more effectively. This has been embraced by most of their rivals, notably McLaren, whose MP4-31 reveals the influence of ex-Red Bull man Peter Prodromou.

Higher cockpit sides are a common feature on all of this year’s cars. The FIA has raised the minimum height by 20mm and the driver’s head protection must now withstand a much more severe crash test in which it is subjected to a 50 Kilonewton force – up from 15kN last year.

F1’s four different power units force designs to make different compromises when it comes to packaging. Last year McLaren trumpeted the ‘size zero’ policy they have pursued with Honda in an effort to shrink their rear bodywork and improve the car’s aerodynamics. Unfortunately whatever gains that offered were more than cancelled out by the engine’s poor performance and reliability.

This year other teams have moved towards the standard set by McLaren. The rear of the Ferrari is noticeably slimmer than last year and Red Bull has done an impressive job of shrink-wrapping their Tag Heuer-branded Renault.

The top-down view also sheds light on another of this year’s design trends at the front of the car: the S-Duct. Having tested it in Brazil last year Mercedes is one of the latest teams to adopt the vent which passes from underside the front nose and exits behind the driver’s number on the W07.

Find out more about every car on this year’s grid:

More images and close-up photography of every 2016 car: