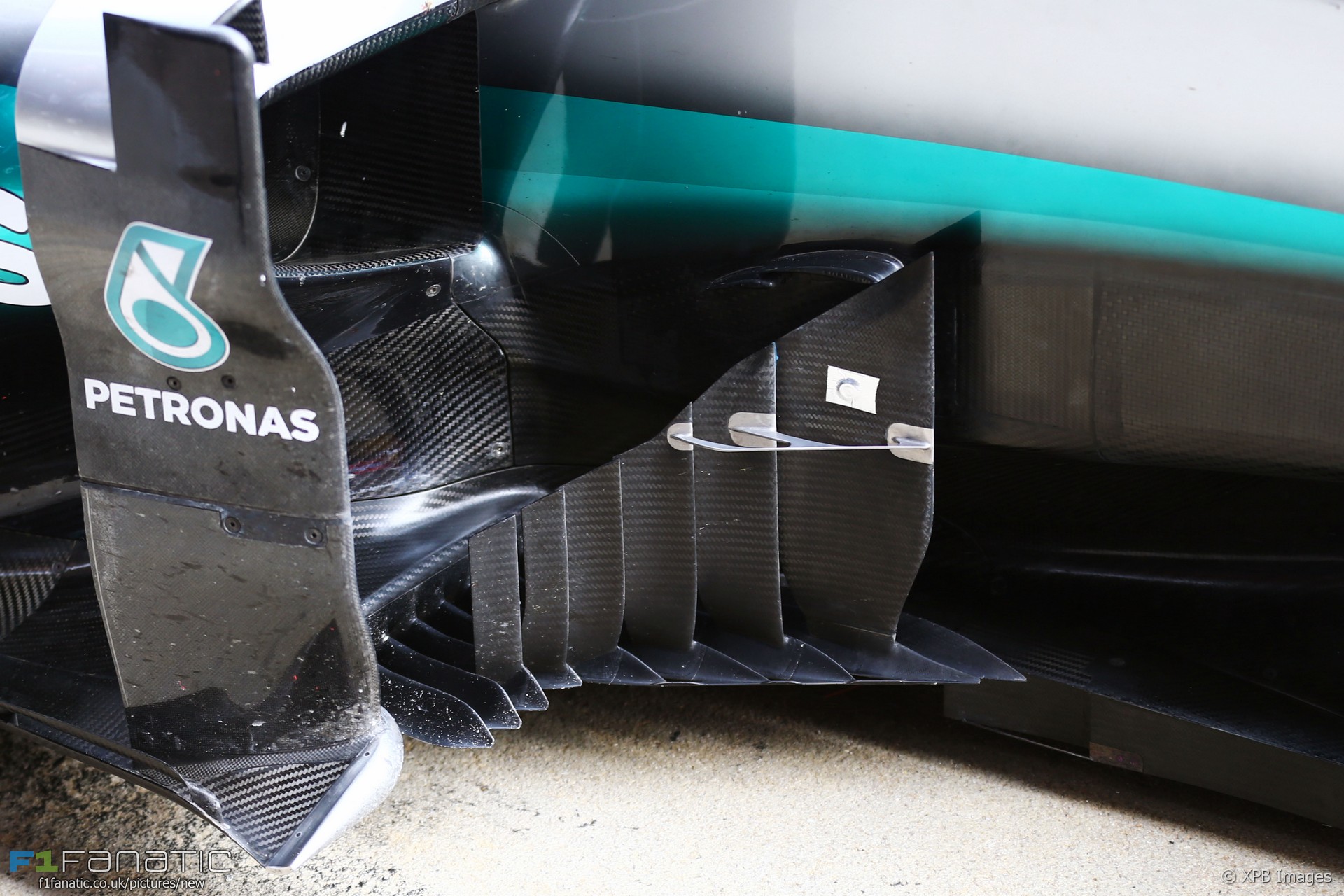 However several of them have already run updates for their 2016 cars during the two pre-season tests in Spain. And the eight days of running also revealed more details which weren’t visible when the cars were first presented.

Here’s a look at some of the eye-catching developments from Mercedes, McLaren and Toro Rosso.

After team team tested a concept design in Brazil last year, the introduction of a fully-fledged S-duct on the Mercedes was widely expected. However the version on the W07 is novel.

The duct is designed to prevent airflow passing over the inclined nose from separating as it flows back over the rest of the car. This is another example of teams seeking incremental gains in overall aerodynamic performance by linking different structures together.

Mercedes’ design cleverly evades the part of the nose regulations that do not allow for openings in the crash structure by opening up a semi-circular slot in a bonded panel underneath. The air is then fed through this slot back to the front bulkhead, underneath the internal suspension components, before rising out of the chassis via a thin horizontal exit. This is unlike other S-ducts on the grid, most of which exit where the chassis and nosebox meet.

Serrated bargeboards are not new to Formula One: Lotus experimented with various cuts and slots in this region over the past five years. However Mercedes has taken the idea to the next level by breaking down their previous two-piece design into six standalone elements mounted on a ‘comb’ attached to the floor.

Separating the bargeboard into miniature turning vanes creates a series of small pressure gradients that will in turn force the air into a vortex. This vortex will shield the clean laminar flow, entrained along the sidepod’s undercut, from turbulence generated by the front tyre.

Likewise with the comb, the vortex shed from this arrangement of bodywork will seal off the forward sides of the floor. This will reduce the leakage of the low pressure flow beneath the car, which is key to running a higher rake angle and extracting more downforce from the diffuser.

Mercedes spent much of the final few races of last year experimenting with serrated tape on the rear wing main plane’s trailing edge. Last year’s car featured similar teeth on the front wing flap, and they are designed to induce tiny vortices that help keep airflow attached to the back side of the wing.

On the final day of testing a new rear wing profile was installed on the W07 to match the design seen on the front wing. It features asymmetrically shaped teeth along the same location that the experimental tape was used previously, and pictures of the rear wing doused in flow-vis reveal how the vortices travel up the top flap above.

The serrated profile should improve the re-attachment of airflow as the DRS is closed, improving braking stability and allowing the driver to keep the wing flap open as long as possible.

The STR11 is a proper eye-catcher in terms of technoology. The rear wing is one area where the team’s approach is strikingly aggressive. It is a total rework over last year’s version, featuring a conventional main plane profile (no lipped centre as in 2015) and a neatly integrated mounting pylon that passes through the exhaust pipe beneath.

However it is the endplates that bound the two wing elements together that are the most intriguing. Their design follows a similar theme to most of the cars on the grid – such as the array of strakes sweeping upwards at the trailing edge and the heavy sculpting to encourage air to flow upwards – but the horizontal louvres are a step ahead of the midfield pack.

Rather than being cut into the endplate, the louvres extend right to the leading edge and form serrations in the endplate. This design will start shifting the air close to the wing tips from the inner to the outer side of the endplate very quickly, reducing the pressure gradient and thus the size of the wingtip vortices shed.

A lot of the themes from the rear wing have also be carried over to Toro Rosso’s intricate monkey seat winglet, placed just above the exhaust to draw the plume up to the underside of the rear wing. This winglet is crucial to linking the airflow from the diffuser and rear wing together as it allows for greater wing angle and more rake angle, too.

With the regulations pinching the teams in so tightly, Toro Rosso appear to be exploiting the little details well compared to their immediate rivals. The winglet is attached to the rear wing’s central mounting pylon via a slender bracket that extends out above the trio of exhaust pipes. It features no more than four elements, with the uppermost element further divided with extra slots at the wing tips. Carried over from the rear wing design are the horizontal louvres – none of Toro Rosso’s rivals is using them on the monkey seat.

Like Mercedes, Toro Rosso have also exploited opening channels along a belly-shaped panel beneath the nose’s main crash structure to feed their S-duct system. The STR11 features four NACA slots along the belly of the nose – two provide air to the duct and the remaining two cool air for the driver into the cockpit.

This S-duct differs from W07’s in that it exits in the traditional spot where the nosebox and chassis meet. This is easier to manufacturer for a team with a smaller budget as it does not require additional work inside the monocoque, with all the plumbing housed inside the nose.

McLaren have admitted to being behind schedule on the development front. Their full 2016 package is expected to run for the first time in Melbourne this weekend.

On the final day of the second test, however, we did get to see their brand new front wing. Its core remains similar to the outgoing version, with Red Bull-style sweeping elements branching across the entire width of the wing before diving down at the extremities to meet the footplate. The cascade winglets – the small devices that branch from the endplates of the front wing itself – are new and are have been downsized from their predecessors.

Following in the steps of Toro Rosso, the small winglet is accompanied by a vane that curls upwards from a horizontal position to form a vertical fin. This will flick the airflow over the endplate and around the front tyre for improved aerodynamic efficiency.

21 comments on “The key technical developments from pre-season testing”