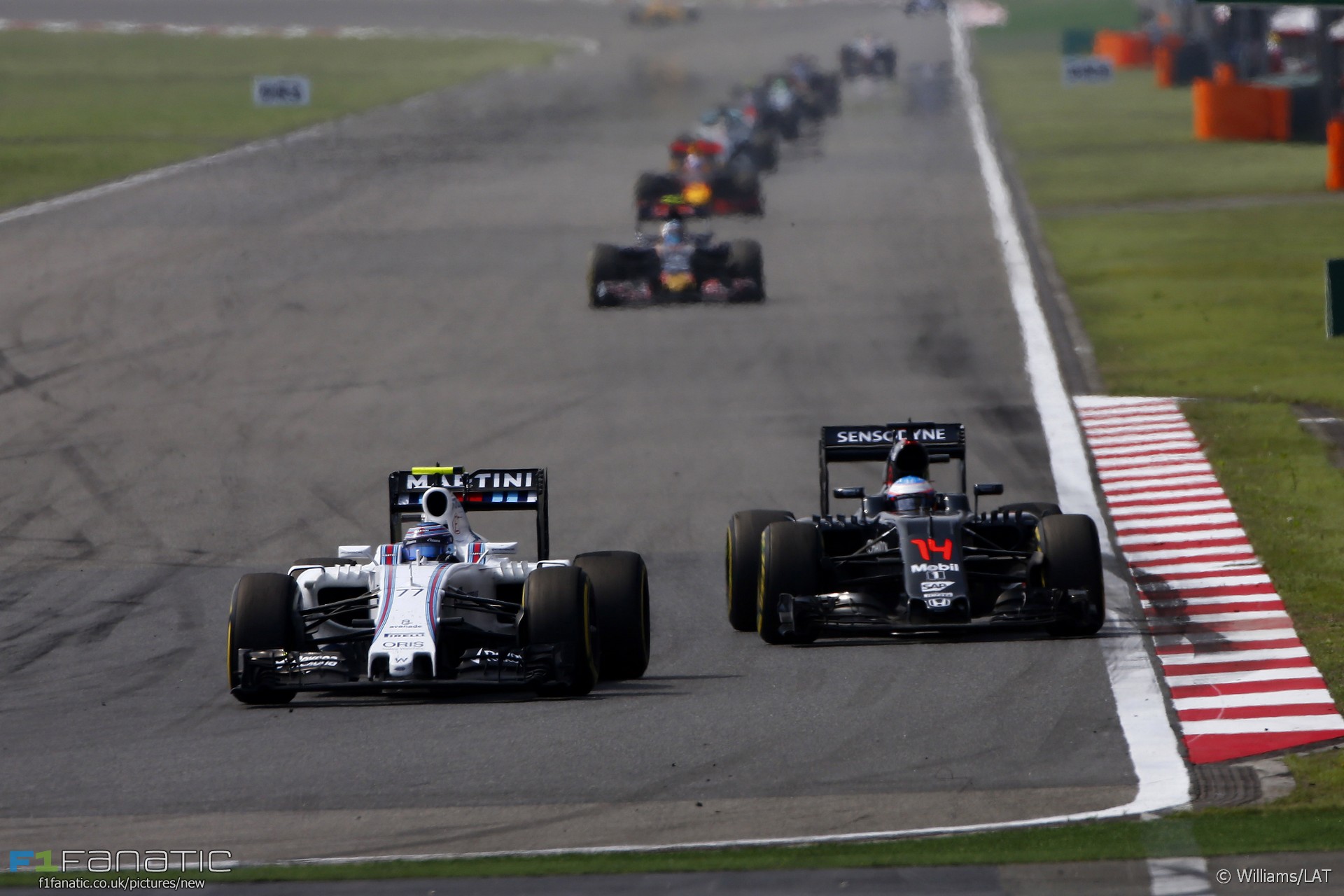 In the round-up: Fernando Alonso says overtaking moves are less “real” in current F1 because differences in tyre performance make them so straightforward.

"Definitely nowadays it is very possible that the car that is running 16th or 17th can overtake a Mercedes. Out of the pit lane with newer tyres you overtake them and pull away. That's difficult to explain to the people in front of the television so the overtakings are probably not as real as they were before."

"The reason you look as a kid of F1, it's 'these guys, they're crazy. They could die at any moment.' Everyone who comes to me, who's just started watching F1, they go: 'it's so dangerous.'"

"A quick one for now is during pit stops you'd have a tear-off system - NASCAR has something similar. And you can get these coatings on the screens which work a bit like Rain-X on your visor, so stuff just floats off."

"The last two races I have been driving with a loss of performance of nearly one second per race and been trying to climb a mountain with that, which was not so easy."

"The Australian is to wear special glasses with cameras in them on his installation lap on Friday so officials can judge the impact of the aeroscreen on visibility."

"Now asked if they could extend the deal after a brighter start to this year, Ricciardo replied: 'It's definitely not unlikely now. And, if we do get what we hope and what we see from the update, it should put us on a Ferrari power unit level, which is competitive enough for the team and the chassis we have.'"

Romain Grosjean column: Haas brought back down to earth (F1i)

"Looking at the on-track action to-date in 2016, it’s my personal opinion that the Mercedes advantage isn’t as big as it was last year."

"India has asked Britain to deport Vijay Mallya, the flamboyant tycoon accused of fleeing to London last month as it emerged that his collapsed Kingfisher Airlines owed £900m to the country’s banks."

FIA president Jean Todt: 'We need to increase the use of electric cars' (CNN)

"We talk a lot about pollution, CO2, climate change, and we have to take that into consideration when we discuss regulations for ongoing championships."

"It is very hard not to perceive Ecclestone, as seems increasingly to be the case in many of his statements, as simply playing the role of both Bill Grundy and the Sex Pistols, from their notorious TV interview in 1976. “Say something outrageous,” prompts Bernie Grundy to himself, who duly replies, as the Sexllestone Pistols, with his version of guitarist Steve Jones’s expletive-laden reply."

You know you've been in F1 too long when you don't see your Russian hotel Fire Escape plan. You see Monza. pic.twitter.com/nDCPvSXDzl

Should the Halo or Aeroscreen only be considered as a stepping-stone to a more satisfying solution to improved cockpit safety?

They should delay the 2017 rule change.

Use this canopy or the halo as a bolted on solution for next year while setting about rewriting the next masterplan of rules in a way which properly integrates the canopy design into the structure of the car. Ripping up the proposed rule changes not only gives them more time to reach a better aero consensus but with the canopy involved in the thinking makes for a cleaner looking car concept.

It looks safe, and that’s great, but it just looks ‘tacked on’ because it kind of is.
Calum

Mika Hakkinen was cruising to victory in the Spanish Grand Prix 15 years ago today when his clutch failed on the last lap.

That allowed Michael Schumacher through to win ahead of Juan Pablo Montoya, who made his first appearance on the podium, and Jacques Villeneuve, who put BAR on the rostrum for the first time.