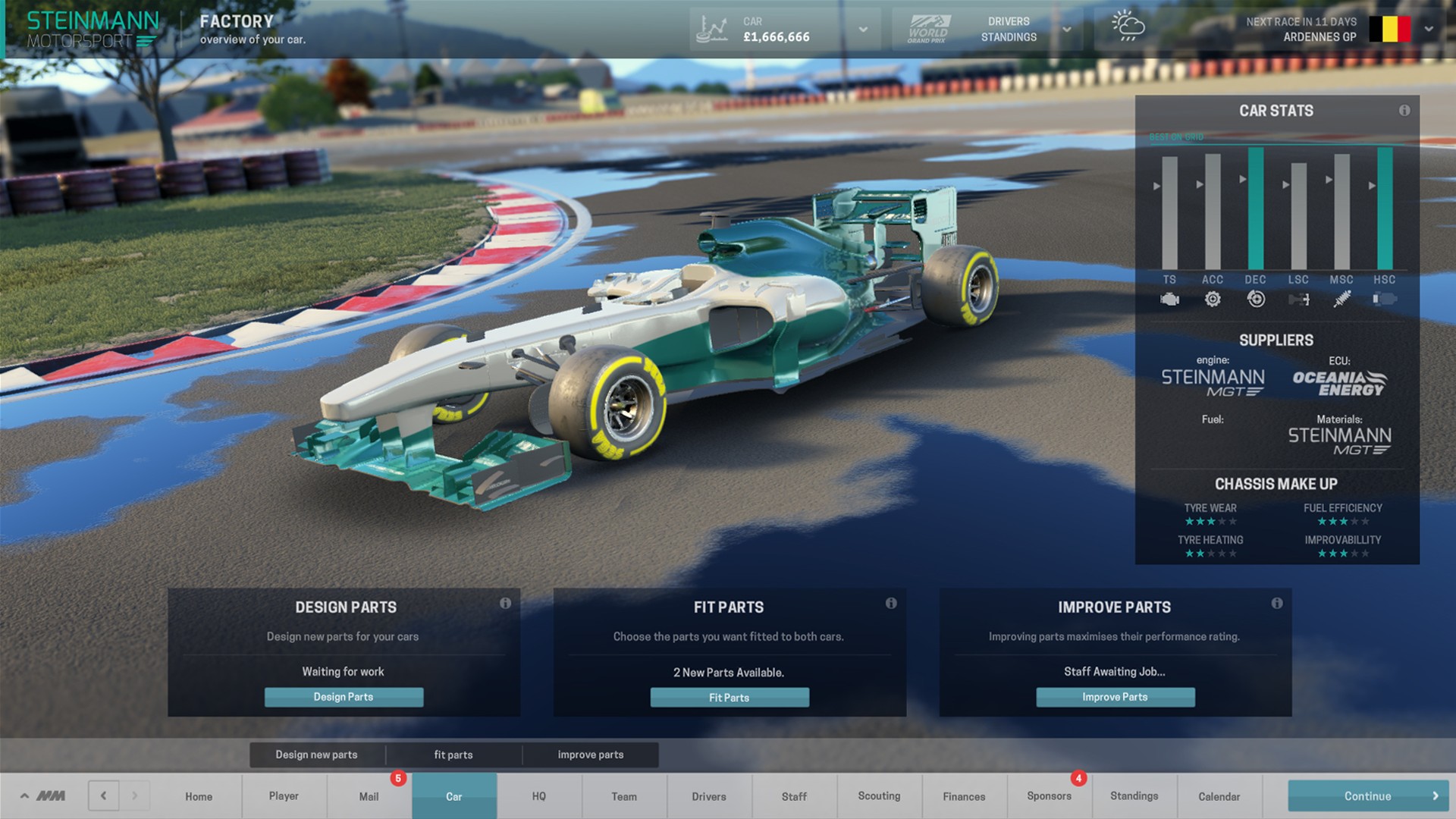 Were you screaming “don’t convert to a three-stopper” when Red Bull put Daniel Ricciardo on soft tyres for his second stint last Sunday?

If so a new game due out in September may be exactly what you’re looking for. Motorsport Manager promises to be something many motorsport fans have been hankering after: our own answer to the hugely successful Football Manager series.

F1 Fanatic met the team behind it and played an early version of the game last week.

It’s not looking good for my number one driver. Dieter Wexler – think Sebastian Vettel with Brian Blessed’s beard – lines up 20th and last in Russia. The Sochi track is not identical to its real-world counterpart but it looks just as much an overtaking-free zone.

The lights go out and Wexler starts well. Let’s run with it, I decide, instructing him to murder the tyres and forget about his fuel consumption. He responds well, picking off more of the stragglers. A solid points finish is now a serious possibility – maybe better.

Within a few laps his Pirelli-esque tyres are almost exhausted. I jab the ‘pit’ button and on his in-lap it’s clear he’s hit ‘the cliff’. With little to lose, I tell the pit crew to throw caution to the wind and get him out again as quickly as possible. A fresh set of hards go on, a generous slug of fuel is added, and he rejoins the fray.

While Dexler has made a great start my other driver Niilo Saarinen has made little use of his second-row starting position. He still has the leaders in sight after the first round of pit stops but is dropping back on hard rubber. It seems the race may come to him when his soft-tyred rivals pit, handing him the lead. But the reason for his struggle soon manifests itself: suspension trouble.

Dexler passes the hobbled Saarinen and takes the lead. I’m trying to get him to the end without another stop but he’s complaining about being told to nurse his fuel and tyres. And his rivals are starting to loom large in his mirrors.

But just as they’re getting close enough to jeopardise our grasp on a one-two they head for the pits a third time. Our path to victory is assured: a quick pit stop for each driver gets us back on fresh tyres, though Saarinen slips to third as his suspension receives urgent repairs

On lap 21 the chequered flag is out and Wexler clinches a stunning back-to-front victory for Ferrari.

West, a fan of the classic nineties Grand Prix Manager series, grabbed the chance to produce the “more detailed, more in-depth” version of the mobile game he always wanted to create. Now you can watch the races in greater clarity, scrutinising your drivers for mistakes. And you can add your creative stamp to your team’s identity.

All the team and resource-management boxes are ticked: you can hire and fire staff including the drivers, scout junior championships for upcoming talent, use the media to get your message across, prioritise which areas of the car to develop and build your factory up from a humble shed to your own answer to the McLaren Technology Centre.

But perhaps the most intriguing aspect of Motorsport Manager is how the game develops from season to season. With over 50 tracks available, many with different sub-variants, the calendar changes from year to year just like the real thing does. The rulebook is a living document too – refuelling, double points and endless qualifying format changes can all make an appearance.

You can even dip your toe into the murky world of racing politics, using your vote to swing decisions on how to change the cars and the racing.

The upshot is the championship you play in year one can change beyond recognition within a few seasons. And if you play long enough the offspring of the original generation make an appearance.

It’s clear Motorsport Manager’s parallel universe lacks one significant aspect: officially licensed drivers, teams and tracks. But that licence brings with it restrictions which would spoil the dynamics of this type of game – drivers could not be shown switching between teams, for instance. This is why six years of Codemasters’ F1 game series exist only as individual titles.

But part of the appeal of the Football Manager series is the authenticity of the world it is set in and the challenge of trying to take your favourite obscure club to Champions’ League success. That’s going to be hard to recreate in a fictionalised racing world – will people feel as strongly about Steinmann’s Harry Chapman as they do about Mercedes’ Lewis Hamilton?

There’s also an element of suspending disbelief involved: gearbox and suspension problems can be tended to in the pits, and if you play as Scuderia Leone you don’t get to veto rules changes you don’t like.

In place of that, the Motorsport Manager team believe they can create a motor racing universe which engages the player by being compelling in other ways. “We’re hoping to get the players so immersed in that environment that the authenticity comes from what we create what we create in our world,” explains West.

We’ll get to find out whether they’ve been successful when Motorsport Manager makes the jump from pocked-sized fun to big-screen gaming experience in September.

43 comments on “Enhanced Motorsport Manager to arrive in September”