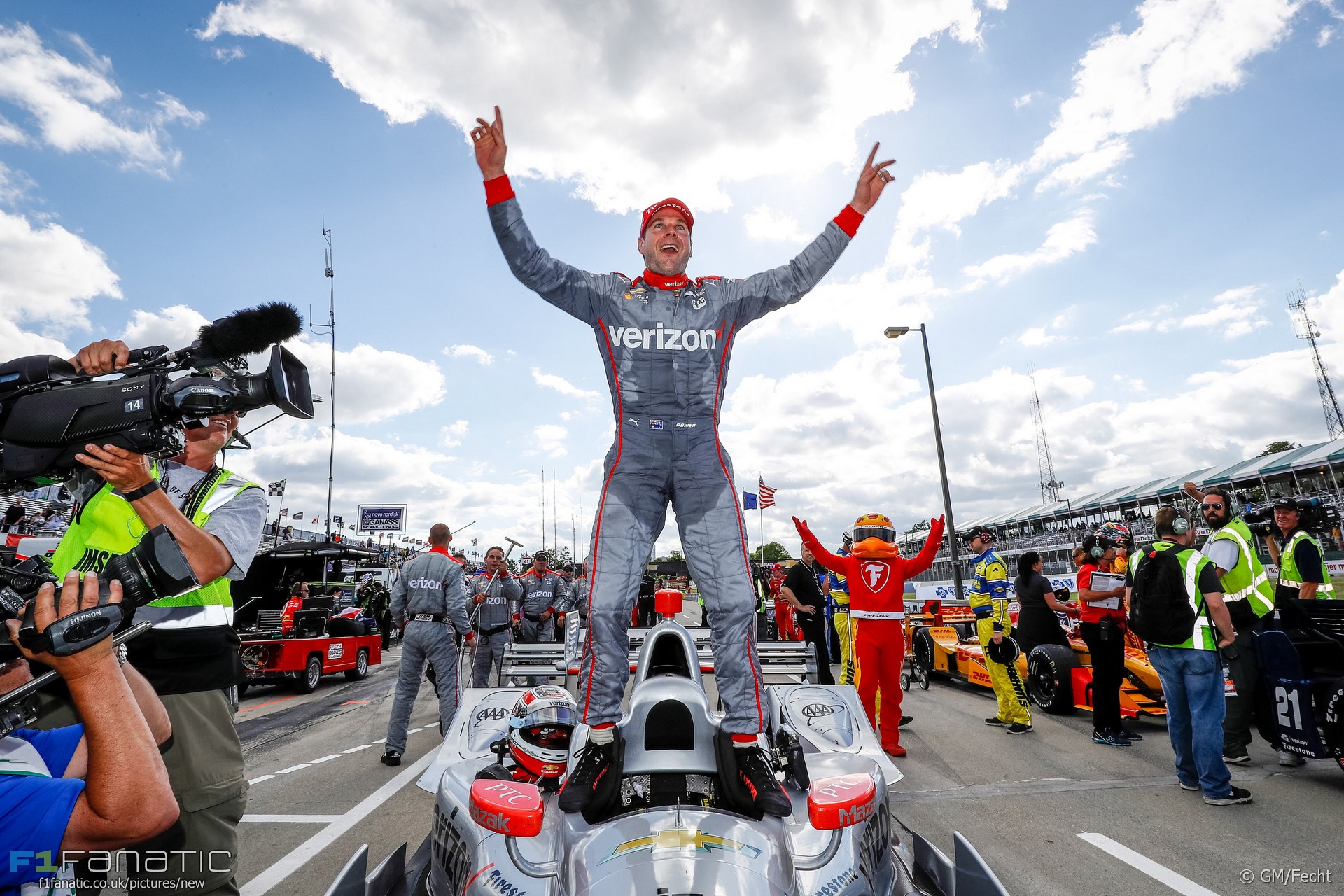 Simon Pagenaud failed to convert either of his pole positions at the two IndyCar rounds in Detroit into victory. However he left his Penske team’s home event with an increased 80-point lead in the championship.

Sebastien Bourdais won his first race of the season with victory in the Saturday race at Detroit after a fraught race decided on strategy. After just a few laps a large portion of the field pitted to switch to the harder black tyres though pole sitter Pagenaud stayed out. When he did pit he rejoined third behind team mate Will Power and Juan Pablo Montoya, though a moment between the two allowed him back into the lead. As a second caution flew for an off for James Hinchcliffe and strategies varied, Bourdais found himself in the lead and duly held on to win ahead of Conor Daly and Montoya as Power retired.

Race two was a rather more sedate affair though there was carnage straight away as Hinchcliffe’s miserable weekend came to an early end in the wall having been forced out wide. Max Chilton joined him while pole sitter Pagenaud stretched his legs following the ensuing caution period. A late caution closed the field up however and on the restart Power pulled an important move on Pagenaud for fifth at the time, but the eventual lead as the four ahead had to make a splash and dash pit stop. Power eased home to claim his first win of the year ahead of Pagenaud and Ryan Hunter-Reay.

Miguel Molina claimed his second DTM career win for Audi in race one with a polished performance at the Lausitzring. However he finished race two out of the points after tangling with Augusto Farfus (below).

Molina started race one from pole and having lost the lead early on he soon regained the top spot and eased away. Jamie Green finished second for Audi ahead of leading Mercedes driver Robert Wickens, while Marco Witmann was top BMW in fourth.

Race two saw Lucas Auer take his maiden win in the DTM in the Mucke Mercedes, winning comfortably ahead of Mattias Ekstrom’s Audi. He pitted early on, but when the pit stops cycled through, he emerged with a safe lead. Ekstrom was in fifth after the stops, but he made light work of Gary Paffett and Green to get to third, before overtaking Wickens with only two laps left for second spot. Wittmann once again represented the best of the BMWs, this time managing a sixth placed finish, but Wickens left the sixth race of the year as the points leader.

Ben Keating and Jeroen Bleekemolen took the Chevrolet Sports Car Classic victory to win their first race of the season in the town that their car was built. They only qualified sixth but smart strategy calls and strong driving helped them into the lead after just 37 minutes. It was at this point Keating pitted to hand the car over and Bleekemolen rejoined in second, but was back up to first after just two laps, although he was pressured until the end by Joerg Bergmeister.

Sam Tordoff was the star of Oulton Park with one win and two second places, but the biggest story was the emergence of the Team BMR Subaru’s. Having been forced to withdraw from the last round at Thruxton, Colin Turkington took pole and duly followed it up with victory in the opening race, while team mate Jason Plato completed a double podium behind Tordoff.

The BMW driver got a better start in race two and never looked back as he led the two Subaru’s home to ensure the same three drivers would complete the podium, while predictably race three saw the most action. Matt Neal led and won comfortably from reverse grid pole and looked to be followed home by team mate Gordon Shedden until the reigning champion picked up a puncture. With now just one Honda up front everyone else became second as Tom Ingram led a train of around twelve cars. Tordoff benefited most as he manoeuvred his way through the line of cars to second, while a small mistake on the final tour cost Ingram third place to Plato on the line.

The Moto GP and support races went ahead at the Circuit de Catalunya despite the crash on Friday which claimed the life of Moto 2 racer. The championships switched to using the slower Formula One configuration of the Spanish circuit which meant riders no longer negotiated the high-speed turn 12 where Salom struck a barrier.

Valentino Rossi won the main event after a close battle in the closing laps with Marc Marquez. Reigning champion Jorge Lornezo was wiped out of fifth place after another banzai move from Andrea Iannone. Following the race Rossi and Marquez shook hands in the paddock in front of the TV cameras to a large cheer from the crowd, with Rossi later declaring the tensions from last year were now behind them.

The NASCAR round at Pocono was postponed due to rain and is due to take place later today.

Next weekend Formula One heads to Montreal in Canada, and IndyCar has its fourth race in three weekends. World Rally and Rallycross are in action from Italy and Norway respectively while the World Touring Cars moves on to Russia and NASCAR heads to Michigan in hope of drier weather.

5 comments on “IndyCar gets sixth different winner in eight races”