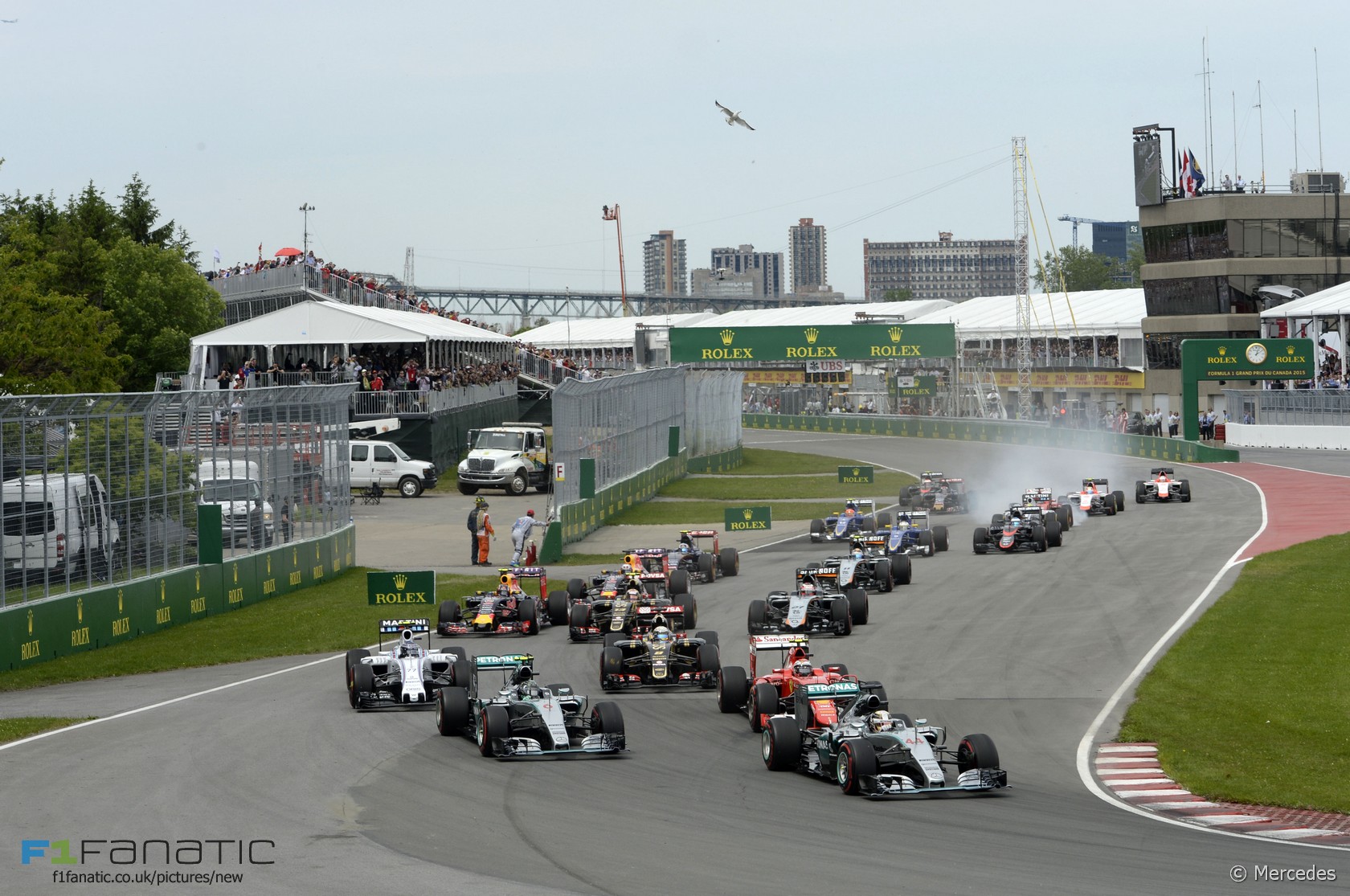 While Mercedes remain the team to beat their rivals have begun to close in.

Red Bull’s engine upgrade could make them a contender for victory this weekend and Ferrari are also bringing new bits for their motor. Which will lead the charge against the silver cars on Sunday?

The Mercedes team will be very wary of the increased threat posed by Red Bull, but will rely on their dominant power unit to keep them clear of the pack in Canada. This is one of Lewis Hamilton’s favourite circuits, having taken his first victory here in 2007 and reaching the top step three times since.

Keen to move on from their disappointing performance at Monaco, the team will be spending a further two tokens to upgrade the turbo this weekend. That might be what they need to close the gap between them and Mercedes – and put those troublesome Red Bulls back behind them.

The long straights will typically suit the Williams car, but the twisty middle sector will punish any lack of grip. Their power unit advantage should put them in contention for a good points finish.

Valtteri Bottas finished third here last year, but Felipe Massa is the only driver to finish every race in the top ten so far in 2016. On paper this looks like their best chance of taking a podium finish so far this year.

After being strategically snookered in Spain and watching his team gift-wrap victory for Hamilton in Monaco, Daniel Ricciardo) will be desperate to claim his elusive first victory of the season. Red Bull’s low downforce package has been very effective in recent years and coupled to their upgraded Renault power unit (now available to both drivers) could see them challenging Mercedes once again.

Meanwhile Max Verstappen needs to prioritise steering clear of the ‘wall of champions’ and Montreal’s many other hazards following his destructive Monaco Grand Prix weekend.

Once again Sergio Perez grabbed a podium by stealth in Monaco, beating both a Ferrari and a Mercedes with excellent strategy calls from the team. Another good result in Canada is possible as the high speed nature of the circuit is likely to suit their chassis and both drivers should be solid points contenders.

However Perez over-played his hand in his race in 2014, struggling on old tyres as he tried to retain third place here when he defended too aggressively against Felipe Massa at turn one, resulting in a huge collision and a post-race penalty.

Pirelli have brought the same compounds for Canada as for Monaco, with teams able to use the soft, super-soft and ultra-soft tyre. Surprisingly Renault have decided to not use the super-soft at all.

The decision, made 14 weeks ago, may not be as radical as the team had hoped as in Monaco the ultrasoft tyre did not provide significantly more grip compared to the supersoft as was predicted. It remains to be seen how the new compound will behave away from the unique Monte Carlo streets.

Toro Rosso struggled last year in Montreal as they were hampered by their low straight-line speed with an under-powered Renault engine. This year they should stand a better chance of competing for points, but will need to eliminate the problems in the pits that plagued Carlos Sainz Jnr in Monaco.

The collision between the team’s drivers in Monaco would have been unacceptable at any time. The team’s precarious financial situation made it even worse.

They will continue to feel the after-effects here as Marcus Ericsson was given a three-place grid penalty for the contact, meaning he will likely start from the final row of the grid.

Canada is likely to be a difficult weekend for McLaren as the long straights and harsh acceleration zones will bring out any weaknesses of the power unit. Honda is bringing an upgrade, however, and the team has made gains since the season began.

Chances of a repeat of Jenson Button’s spectacular victory here in 2011 are slim indeed, but the team are sure that steady progress is being made to return them to the top step soon.

The fact that the Manor car cannot produce as much downforce as its rivals means it generally will produce less drag, which may be of benefit down the long straights. Coupled to a Mercedes engine this will see them slightly closer to the pack, but don’t expect miracles.

Haas has an even more aggressive tyre selection than Renault, bringing ten ultra-soft sets per driver and just three of the softs.

Romain Grosjean has taken all of the points for the team so far this year and he achieved the best result of his career to date in Canada for Lotus in 2012 with second place. Esteban Gutierrez was elated just to see the chequered flag in Monaco.

Are you going to the Canadian Grand Prix?

If you’re heading to Canada for this weekend’s race, we want to hear from you.

Who do you think will be the team to beat in the Canadian Grand Prix? Have your say below.