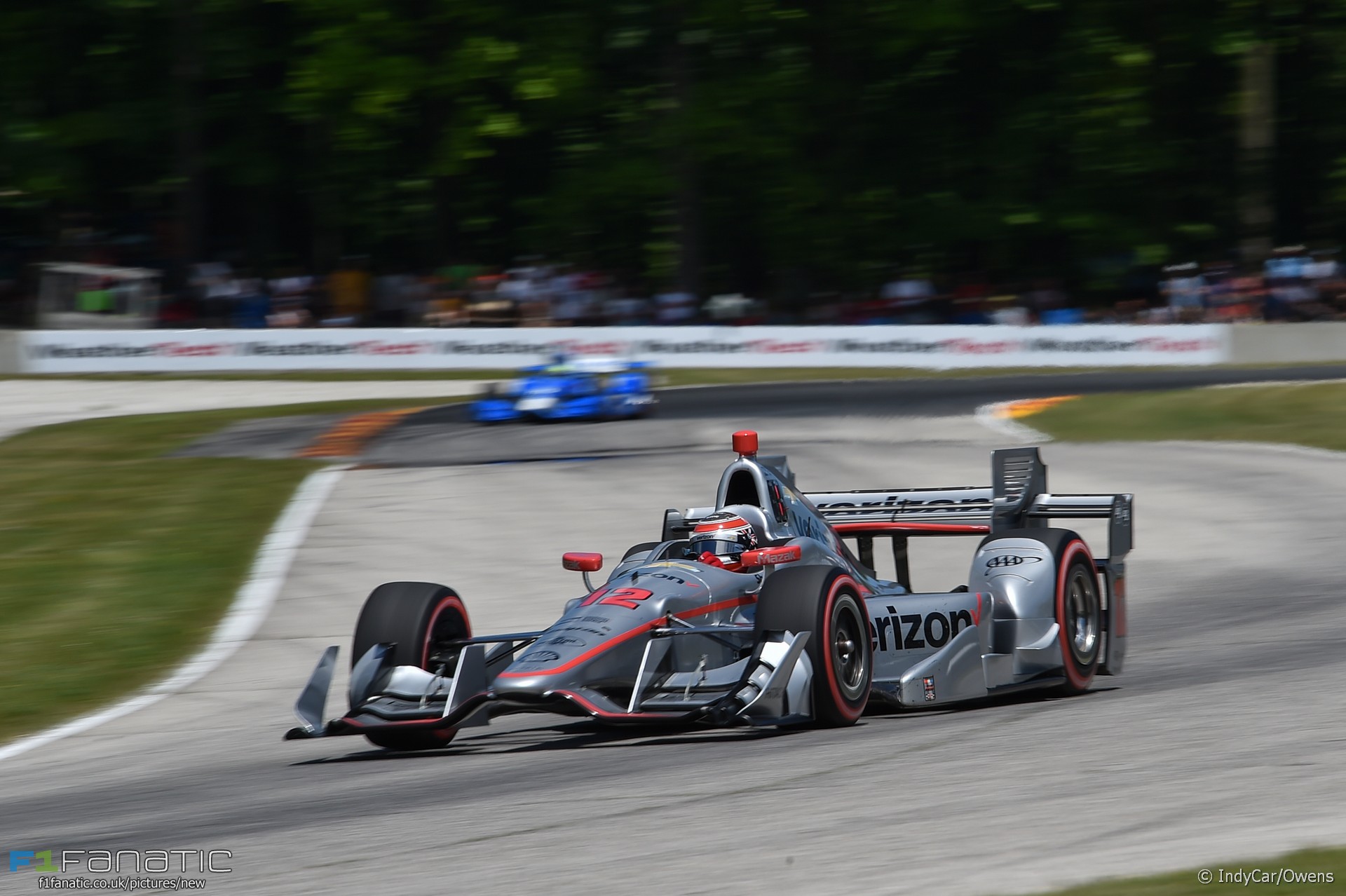 IndyCar’s return to Road America produced the second-closest finish the championship has ever seen at the much-loved venue.

Elsewhere there was carnage at the Norisring in both European F3 and DTM, and the total opposite in the WTCC from Vila Real in Portugal.

Will Power got his championship challenge back on track at Elkhart Lake, leading nearly every lap as he won from pole position. But it wasn’t quite as straightforward as that thanks to a late caution period which put a racy Tony Kanaan on his tail.

The Ganassi driver slashed Power’s advantage as they raced to the flag, and was left wishing the race’s only caution period had finished sooner after falling short by less than half a second.

The race’s only caution period came as Conor Daly spun into the barriers at turn one due to an apparent rear suspension failure. The Coyne driver had again been running strongly inside the top ten ten.

Championship leader Simon Pagenaud suffered a rare setback after an electrical problem on his Penske caused him to drop back late in the race. However Scott Dixon, his closest rival as the series arrived at Elkhart Lake, was unable to capitalised having retired with a technical problem of his own early in the race.

Lance Stroll claimed two wins and a second to further extend his championship lead while his closest rivals slipped up at the Norisring. Among them was Callum Ilott who despite taking his first of three consecutive ten-place grid penalties due to an engine change fought his way up to third in race one, only to collide with race leader Joel Eriksson and hand victory to Stroll.

Sergio Sette Camara and Guanyu Zhou collided while fighting for third on the restart prompting another Safety Car, and on the second restart Pedro Piquet and Harrison Newey came together. The safety car wasn’t needed again however and Stroll cruised to the win ahead of Niko Kari and Nick Cassidy, though George Russell inherited the podium when Cassidy received a five-second penalty for a Safety Car infringement.

Anthoine Hubert took his maiden victory in the series in a second race heavily interrupted by Safety Cars. Three appearances meant little racing was able to take place, and the podium – Hubert from Stroll and Maximilian Gunther – was the same as the order after the first safety car period.

The Safety Car appeared early in the final race as well but not due to a driving error – the lights on the starting gantry failed and the decision was taken to use a rolling start. However an over-optimistic move by Russell on the luckless Eriksson meant race three was soon neutralised again.

Approaching the restart Piquet hit Ryan Tveter at the final corner and collected Kari. The race was red-flagged so the Red Bull junior driver could be taken to hospital, and after a final restart Stroll collected another win to open up a

Before racing could resume Piquet hit Ryan Tveter – who slid into Kari – and a red flag was thrown. The safety car restarted proceedings again and despite a further collision towards the end – didn’t reappear. Stroll avoided all trouble up front to collect another win ahead of Hubert and Camara – who overtook team mate Zhou after the red flag restart.

A wildly optimistic move by Mattias Ekstrom eliminated the top three drivers from proceedings in race one. The Audi driver clipped Robert Wickens while trying to pass his rival and thumped into Christian Vietoris, who had been on course to end a two-year victory drought. Edoardo Mortara therefore became the first driver to win two races this year, beating ‘Mr Norisring’ Jamie Green to the flag.

Race two saw a new race winner, with Nico Muller holding off Tom Blomqvist from third on the grid. Muller overtook third placed di Resta on the first lap and kept pace with pole-sitting Blomqvist until the pitstops, when Muller set some quick in-laps to take the lead.

A largely processional first race was won by Tom Coronel, who led from pole position and never looked back. The action that did take place happened at the start, with Jose Maria Lopez jumping Thed Bjork for fifth and Tom Chilton moving past Nicky Catsburg for second. Chilton attempted to pressure team mate Coronel, but failed to find a way through.

The second race was barely any better in terms of action, as Tiago Monteiro won from pole to move back into second in the championship. Catsburg moved from ninth to seventh at the start, while team mate Hugo Valente went to ninth from thirteenth, but up front the podium matched the grid, with Yvan Muller and Norbert Michelisz following Monteiro home.

Tony Stewart second-guessed a late caution period for debris and made an early pit stop which put him in the lead at Sonoma. But he still had to fend off a late attack from Denny Hamlin and re-took the lead with a bold move at the final turn.

In race one, Egor Orudzhev fought off a huge challenge from Roy Nissany to become the first multiple winner of the 2016 championship. A late charge from Nissany brought him within half a second of the Arden driver, but he had to settle for second ahead of Lotus team mate Rene Binder.

Louis Deletraz took race two honours ahead of Nissany and Orudzhev, with the former having started from pole position. Deletraz was in third at the pit stops, but an early stop meant he undercut Nissany and Orudzhev to emerge in the lead. The Fortec driver led from there to the end to take the win by 2.9 seconds.

Championship contenders Dean Stoneman and Ed Jones came to blows in race two at Elkhart Lake as Stoneman forced his way into the lead despite being pushed almost fully onto the wet grass approaching turn six. Jones nearly spun at the exit of the corner and was hit from behind by team mate Felix Serrales. However the incident left Stoneman with a puncture which dropped him to ninth.

Santiago Urrutia won the wet/dry race and now lies 24 points behind Jones in the championship, with Stoneman 19 points off the leader. Race one was won convincingly by Zach Veach ahead of Stoneman, despite the latter collecting a five-second time penalty for forcing Andre Negrao wide at turn five.

Next weekend Formula One, GP2 and GP3 head to the Red Bull Ring in Austria, while the second ever Formula E title will be decided in London. There’s also World Rally in Poland and World Rallycross from Sweden, while NASCAR and IMSA also continue.