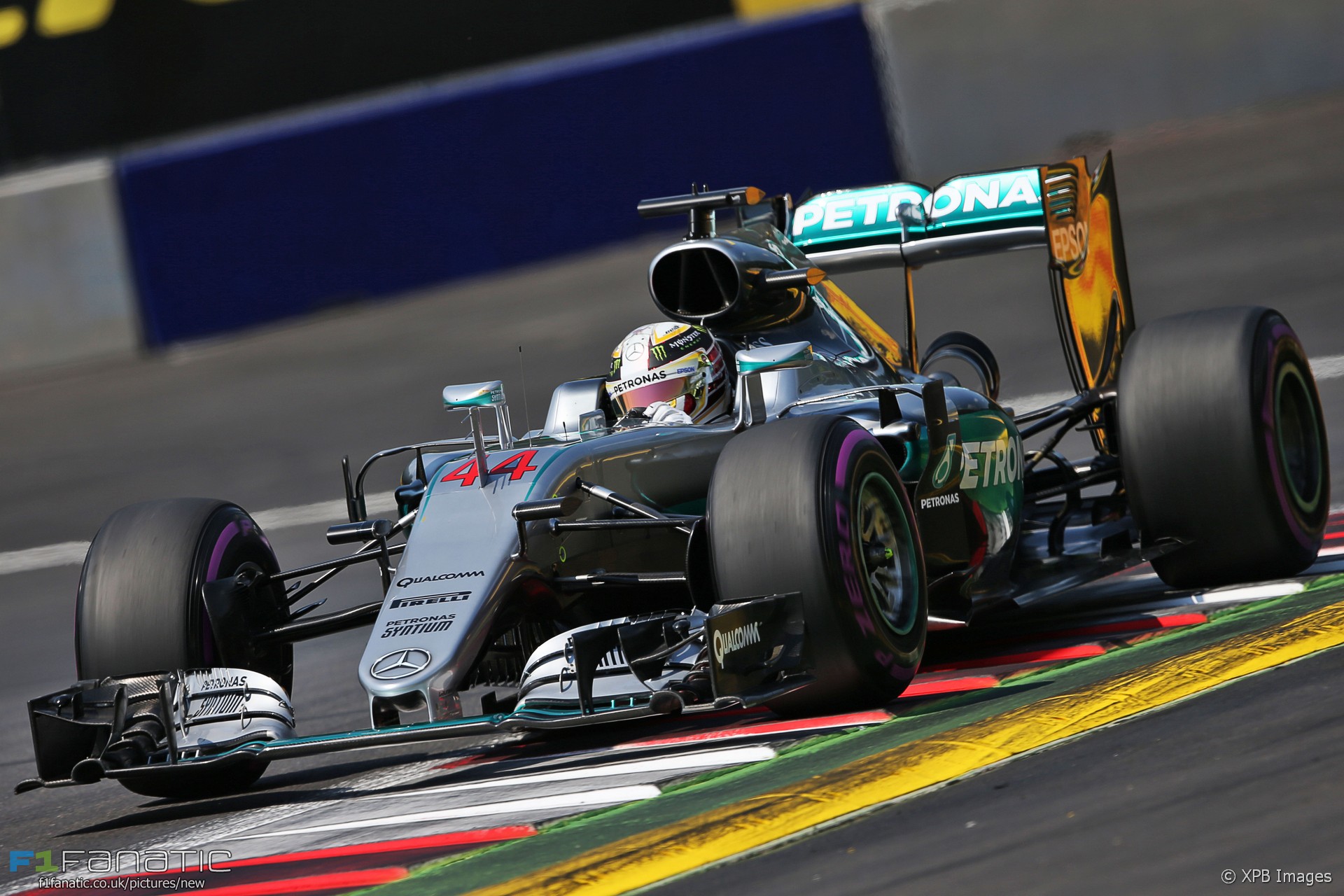 Lewis Hamilton was fastest in a damp qualifying session, penalties for Nico Rosberg and Sebastian Vettel means that Nico Hulkenberg will line up second, Jenson Button in third position. The session was dramatically affected by suspension failures and changeable conditions.

Nico Rosberg emerged from the pitlane with nine minutes to go in the first session in his repaired Mercedes and immediately set a record laptime of 1’06.690. His team mate Lewis Hamilton could only manage a time 0.431s slower, still struggling to match his pace. Sebastian Vettel split the Mercedes, showing the potential of the Ferrari package, two and a half tenths behind Rosberg.

Pascal Wehrlein kept up his good form from the practice sessions to finish in P10, only 1.049 seconds away from Rosberg’s fastest time.

The story of the session was again the occurrence suspension failure, firstly Sergio Perez limped home all the way from turn one, followed by a huge accident from Daniil Kvyat after his right rear suspension collapsed as he bounced over the kerbs on the outside of turn seven.

The session restarted with a flurry of activity as with only 1 minute 44 seconds to go the drivers grappled to find a clear track, only to be thwarted by yellow flags caused by Carlos Sainz’s stricken Toro Rosso, with plumes of smoke from the exhaust.

Nico Hulkenberg was the only driver to improve and shortly afterwards the stewards advised that he was under investigation for not slowing sufficiently under the yellow flags. The decision will be due shortly after the end of the session.

A combination of improvements in car design and the introduction of the ultrasoft tyre for this season meant that even Felipe Nasr’s time would have been good enough for pole position in 2015.

Mercedes set the pace in Q2, with Lewis Hamilton heading Nico Rosberg by 0.175 seconds, but a strategic error appears to have put them on the back foot in terms of strategy for the race.

Both Ferraris set their fastest qualifying time in Q2 on the supersoft tyre rather than the ultrasoft compound, thus starting the race on the more durable tyre.

Red Bull initially set their times on the ultrasoft compound but went out for a second run to follow the lead of the Ferrari team, both drivers were just able to better their initial times meaning they will also start the race on the supersoft tyre.

Mercedes saw this strategy unfolding and attempted to do the same, but came out too late as a small amount of rain made the track surface too slippery to improve their times. They will start the race on the ultrasoft tyre, which suffered with significant blistering during third practice.

Jenson Button put in a good lap time to progress to Q3, out qualifying his team mate for only the second time this season.

Pascal Wehrlein was able to keep his strong pace going and lines up in twelfth position, between the two Haas cars of Esteban Gutierrez and Romain Grosjean.

The session started on intermediate tyres and drivers struggled for grip, with Kimi Raikkonen harmlessly sliding off the track on his first effort in the first sector. Vettel set the initial pace, with Hamilton close behind.
As the track started to dry the times tumbled with each driver to cross the line, with Hamilton, Rosberg, Ricciardo and Hulkenberg briefly taking turns at the top. The intermediate running finished with Hamilton ahead of Button and Ricciardo.

With a dry line forming in the dying minutes of the session the field then pitted for ultrasoft tyres. Hulkenberg crossed the line first, heading the field by 1.2 seconds, but was quickly beaten by Massa, Vettel, Raikkonen, Bottas and Hamilton, before Hulkenberg came round again to go fastest again.

The times kept improving and Hamilton took pole position half a second ahead of Rosberg, with Hulkenberg in third position. Hulkenberg will move up to the front row of the grid after Rosberg’s penalty, as long as he avoids one himself for his Q1 time.

Jenson Button was the last man to cross the line as the chequered flag dropped but was only able to produce the fifth fastest time, splitting the two Ferraris. This will become a net third position once both Rosberg and Vettel’s penalties are added.

Williams struggled in slippery conditions that do not suit their car, taking eighth and tenth positions. Bottas finished ahead of Massa despite a spin in sector two on the wet track.