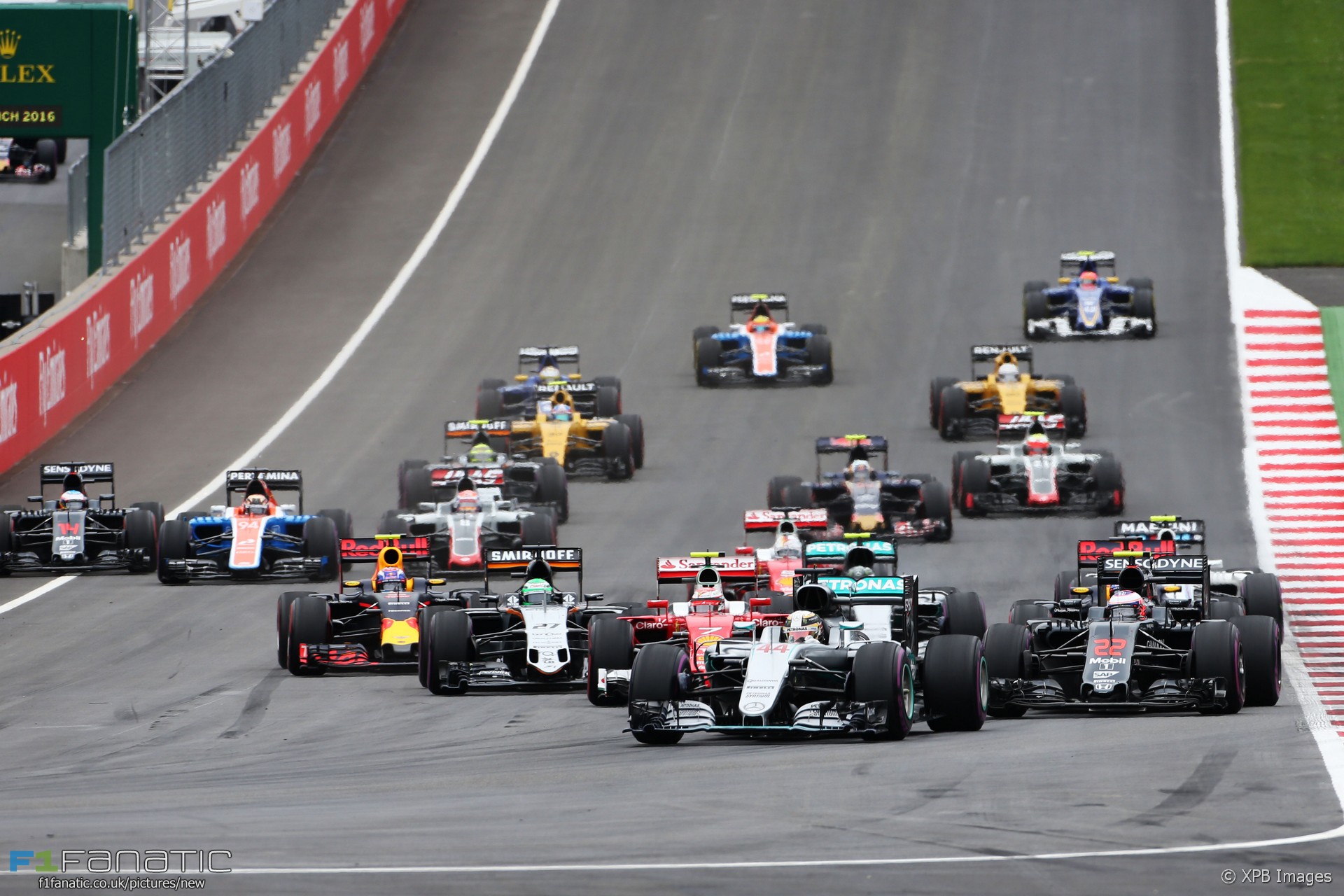 Which drivers got the most out of what they had at the Austrian Grand Prix? Here are the ratings for all 22 of them.

Lewis Hamilton – Having been off his team mate’s pace on Friday he sussed the drying conditions magnificently in qualifying to claim pole position. He was on course for a straightforward win when a slow pit stop dropped him behind his team mate. An attacking strategy change put him on Rosberg’s tail in the closing laps, and he’d lined the other Mercedes up for a last-lap pass when Rosberg shoved him wide. He survived the contact and took a deserved, gritty win.

Nico Rosberg – Headed the times on the first two days of practice but on Saturday morning suspension failure put him in a barrier, leading to a gearbox change penalty. He had the pace to beat Hamilton in qualifying – his sector times were better – but coped less well with the tricky conditions in Q3. From sixth on the grid he moved to the front with little difficulty, though his first set grained more quickly than Hamilton’s. He might have taken the win had Mercedes left their drivers on one-stop strategies but Hamilton took fresh tyres and put him under pressure, and on the final lap Rosberg buckled. Though he also had a brake-by-wire problem and debris from Vettel’s puncture to contend with, his move on Hamilton was cynical.

Sebastian Vettel – Felt he would have been able to push Mercedes in a dry qualifying session, and was unhappy with his conservative final effort on the quickly drying track. A gearbox change penalty dropped him behind Raikkonen. He ran a long opening stint in the race which might have brought him into contention but his right-rear tyre exploded without warning.

Kimi Raikkonen – Out-qualified by a Force India and – astonishingly – a McLaren. He passed Hulkenberg immediately at the start and got by Button after a few laps as well. However he fell behind the Red Bulls when he pitted and although he managed to get past Ricciardo, Verstappen held him off until the end.

Felipe Massa – Didn’t get out of the pits early enough at the end of Q3 to be able to do a third run on slicks, and ended up at the bottom of the top ten. Making matters worse, a front wing change on Sunday morning consigned him to a pit lane start. He looked on course to recover some points until a puncture forced him in for an extra pit stop, and he retired soon afterwards with braking problems.

Valtteri Bottas – Felt he would have qualified better had it not rained – a Williams weakness of late – but was promoted to seventh by Vettel’s penalty. He lost two places at the start and struggled for tyre life in the race, slipping back to ninth.

Daniel Ricciardo – Only had time for a single lap on slicks at the end of Q3 and although he produced a good effort Red Bull clearly missed an opportunity. Verstappen got ahead of him on lap two but Ricciardo lacked his team mate’s pace, particularly after the Safety Car period. He passed Button for fifth but wasn’t close enough to take advantage of Rosberg’s penalty.

Max Verstappen – Damaged his car on the kerbs twice in first practice. In qualifying he also only had a single run on slicks at the end of Q3 – and was over a second off Ricciardo’s time. His race was much better, however: he passed Ricciardo early on then jumped Raikkonen through his pit stop and held the Ferrari off to the flag for a strong second place.

Nico Hulkenberg – Committed early to slicks in Q3 and reaped the rewards, setting a time good enough for second with his third lap. He was cleared of going too quickly through yellow flags and kept the position. However his race was a disaster: the Force India chewed its tyres and Hulkenberg pitted three times. He was in trouble with brake wear as well, which eventually forced him out.

Sergio Perez – A vexing weekend: Alfonso Celis drove his car in first practice, which made the rain in the second session a greater inconvenience. A suspension failure in Q1 kept him from taking part in the second phase of qualifying. And then in the race a brake failure put him out with two laps to go.

Kevin Magnussen – A place in Q2 might have been possible but he slipped up at the final corner on his best run. His race chances were harmed by a five-second penalty for weaving in front of Wehrlein, which he admitted was “fair enough as I did move more than once and you’re not allowed to do that”. That dropped him behind his team mate, but once again this seems to have been a weekend where points weren’t on offer for Renault.

Jolyon Palmer – Also happier with his car, Palmer was just two-hundredths of a second off Magnussen in qualifying. However he was bumped back three places for failing to slow sufficiently in a yellow flag zone. Leading home Nasr in the race was a reasonable result.

Daniil Kvyat – Got a bit greedy with the kerb at turn eight in qualifying and paid a heavy penalty as his suspension gave way, spinning him out. His race never even got going – he was out soon after the start with an as-yet unspecified mechanical problem.

Carlos Sainz Jnr – Sixth in both sessions on Friday, he then had a luckless Saturday. An electrical problem in final practice forced a change of engines, and the replacement unit failed during Q2. He started strongly, climbing four places to tenth, but fell back to 17th when he pitted under the Safety Car. However he made it to the end from there, passing Alonso on his way to a decent eighth.

Marcus Ericsson – Pipped Nasr in qualifying and by avoiding a yellow flag speeding penalty moved up to 18th. The race was a long grind, however: struggling with his front tyres he slipped to last at one stage and finished a distant 15th.

Felipe Nasr – Unlike his team mate Nasr did cop a penalty, and lined up last. However he produced one of Sauber’s most convincing performances so far this year, starting on softs and rising to seventh at one point after the Safety Car period. His tyre change eventually dropped him out of points contention, however.

Fernando Alonso – Not best pleased after Q2, when he did his initial run on a set of used tyres then on his new tyre run had to back off for a yellow flag. It had been caused by his team mate. His bad luck continued in the race, which was hampered from the early stages by a battery problem and eventually led him to retire.

Jenson Button – Despite his Q2 slip-up Button grabbed a place in Q3 and then performed some of his trademark damp-track magic to qualify fifth ahead of both Red Bulls, the Williams pair and Raikkonen’s Ferrari. Penalties for other drivers then promoted him to third, and the surprises continued in the race when he moved up to second at the start and stayed there for six laps. He inevitably slipped back but sixth place was a fine result.

Pascal Wehrlein – Clearly revelling in a track he knows well and enjoying the benefit of Mercedes power, Wehrlein took Manor to the rare heights of 12th in qualifying. He accidentally lined up tenth on the grid but had the presence of mind to reverse his car into the correct slot. He steered clear of the super-softs in the race, running two stints on ultra-softs then going to the end of softs. This paid off handsomely, and Perez’s late retirement promoted him to tenth for a point.

Rio Haryanto – Couldn’t hide the fact he’d left quite a bit of performance in the car following his team mate’s Q1 heroics, and to make matters worse he was penalised for speeding through a yellow flag zone. An electrical problem didn’t help matters in the race, but even so the gulf in performance between him and Wehrlein was stark.

Romain Grosjean – Slid into a gravel trap during Q2 and by the time his floor was repaired the rain had arrived and he was out. The start didn’t go well – he was squeezed wide and lost places – but he persevered long enough on his super-soft tyres that his eventual pit stop coincided with the Safety Car period. That moved him up to seventh, a position he kept despite a five-second penalty for pit lane speeding.

Esteban Gutierrez – Hampered by various problems during practice, he nonetheless came within six thousandths of a second of reaching Q3. However he undid that good work with a poor start, falling to 18th after his engine went into anti-stall. He recovered to finish just outside the points once again.

Who was your Driver of the Weekend?

Do you agree with the ratings above? Vote for your Driver of the Weekend here: