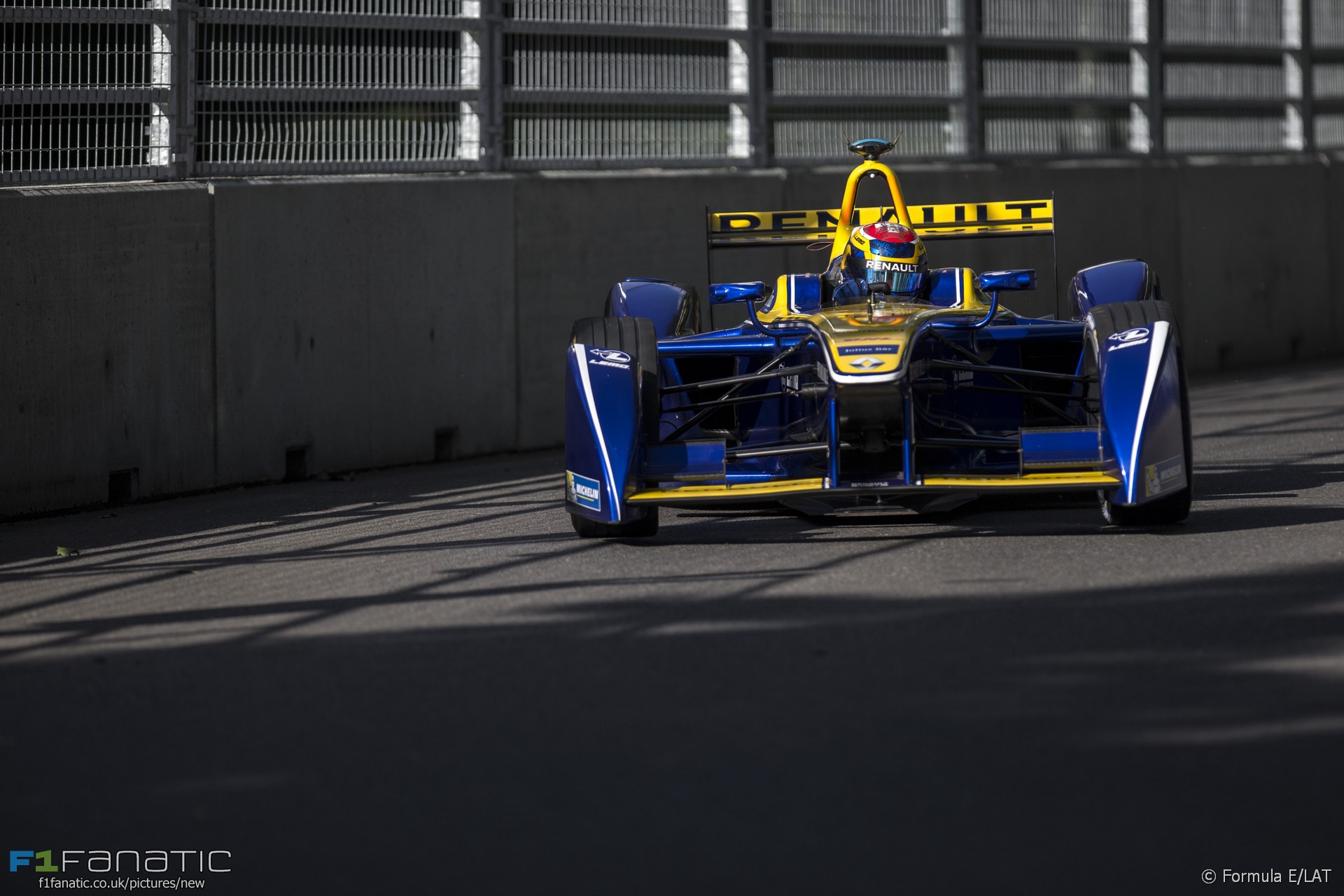 The second Formula E title was decided in bizarre circumstances on Sunday. The championship rivals went into the race tied on points but a first-lap collision between the pair dropped both out of contention in the race, leaving them to battle over the points on offer for fastest lap.

Elsewhere there was heartbreak in the World Rally Championship and NASCAR produced another ‘big one’ at Daytona.

The 2015-16 Formula E championship came to an anti-climactic end in the second double-header race in London on Sunday.

Saturday’s race was a real nail-biter as title contenders Lucas di Grassi and Sebastien Buemi edged their way forwards having qualified mid-pack due to a rain shower. The took the flag fourth and fifth, leaving Buemi ahead by three points.

Buemi drew level with his rival by taking the points for pole position on Sunday, and with team mate Nicolas Prost separating him from di Grassi on the grid his chances looked strong. But at turn one Di Grassi slammed into the rear of his championship rival, claiming he had braked too early.

Both dragged their damaged cars back to the pits and with their chances of scoring points in the race now remote, the points available for fastest lap could settle the outcome. As Buemi’s eDams Renault has clearly been the quicker car over a single lap, with four pole positions to Abt’s none, the outcome was a foregone conclusion. Buemi duly set the fastest lap and collected the points and title, despite finishing 17 laps down.

While the title fight reached an unsatisfactory conclusion, Prost cruised to win by 7.6 seconds in a race interrupted by no fewer than three Safety Car periods. Daniel Abt and Jean-Eric Vergne followed him home, but the latter was penalised for exceeding the energy usage limit, promoting Jerome D’Ambrosio to third.

Afterwards Buemi revealed his disappointment at how the championship had been decided: “I’m actually to win it in that way, but also to see what Lucas did because I was very respectful of his driving, he’s been amazing. Like he’s said many times, his car is very bad and he is a very good driver, and if he was in my car he’d be at least half a second quicker.”

“He’s a great driver, he did 24 hours in Le Mans, he never touched a car. He went between Nico and the wall, and I could tell you there was maybe five centimetres and once he braked, I just saw on the camera, he has two options – either go to the right or nail the back of my car and he nailed it perfectly. But a little bit too strong because we both went out.”

“I’m a bit sad to see this because I think that was his only opportunity. In the end we had the quickest car, we were the best team. If we could’ve come out of this corner in front of him, we would’ve been far quicker.”

On Monday Di Grassi tweeted: “I wake up today sad but proud. I took FIA FE championship fight, with an inferior car and [Mexico] win stripped away, decided on fast lap points.”

Andreas Mikkelsen picked up his second ever victory but only after heartbreak for Ott Tanak on the penultimate stage of the rally cost the M-Sport driver what would have been a shock maiden victory.

The soft gravel roads – and lowly starting order – played to the advantage of Tanak’s tyres, and he took the rally lead midway through Friday, building his advantage to just under twenty seconds over Mikkelsen and Hayden Paddon before the final two stages on Sunday.

There was to be no dream result however, as a puncture on the penultimate stage cost Tanak nearly forty seconds, and cruelly denied the clearly devastated Estonian. Mikkelsen took the win ahead of Tanak – who still secured his best finish – with Paddon just holding onto third on the final stage.

Running first on the road once again hampered Sebastien Ogier, and though the world champion did pick up all three power stage points, his rally will more likely be remembered for consoling – and quite literally picking up – the desperate Tanak.

“Heart broken is the first word that comes to mind,” reflected Tanak afterwards. “Second is determined. We will do it one day.”

Brad Keselowski took the win in the Coke Zero 400 at Daytona – in a race heavily affected by numerous accidents including the infamous ‘Big One’ – avoiding the carnage by leading 115 of the 161 lap race. With a four car wreck on lap 155, the race went into ‘overtime’, and Keselowski beat off challenges from Kyle Busch and Trevor Bayne as his Penske team-mate Joey Logano bump drafted him to the front of the pack with one lap to go.

There was drama aplenty on the opening day as Mattias Ekstrom, Petter Solberg, Timmy Hansen and Andreas Bakkerud all suffered problems during qualifying one – with the world champion eventually failing to make the final for the first time since Turkey last season.

Bakkerud took the joker lap on the opening tour and immediately closed back up on the leaders, cycling back through to the front when Sebastien Loeb and Hansen eventually took the joker themselves. Hansen applied pressure but Bakkerud held on for his second consecutive win, while a problem for Hansen at the final corner handed second to Loeb, while championship leader Ekstrom could only manage sixth and last in the final.

Christian Fittipaldi and Joao Barbosa shared victory in their Mustang, Barbosa crossing the line just seven-tenths of a second ahead of the sister car of Dane Cameron and Eric Curran.

Lewis Hamilton closed on Nico Rosberg after the championship-contending Mercedes drivers clashed on the final lap in Austria.

The GP2 championship remains wide open and is now led by Raffaele Marciello who is yet to finish in the top two this year. Saturday’s race was red-flagged after Artem Markelov crashed into the pit lane exit under Safety Car conditions, which helped the Campos pair take a surprise win, led by Mitch Evans. Jordan King won Sunday’s race, managing his tyres to perfection on a drying track.

In GP3 Charles Leclerc repeated his form from Spain, winning the opening race and failing to score in the second. Heavy rain on Sunday meant race two was mostly run behind the Safety Car, though during the brief moments of green flag running Ralph Boschung found his way to the front to claim his maiden victory.

Next weekend Formula One, GP2 and GP3 head to Silverstone. Outside Europe both IndyCar and NASCAR are racing on ovals – Iowa and Kentucky respectively – and Australian Supercars have a double-header at Townsville.