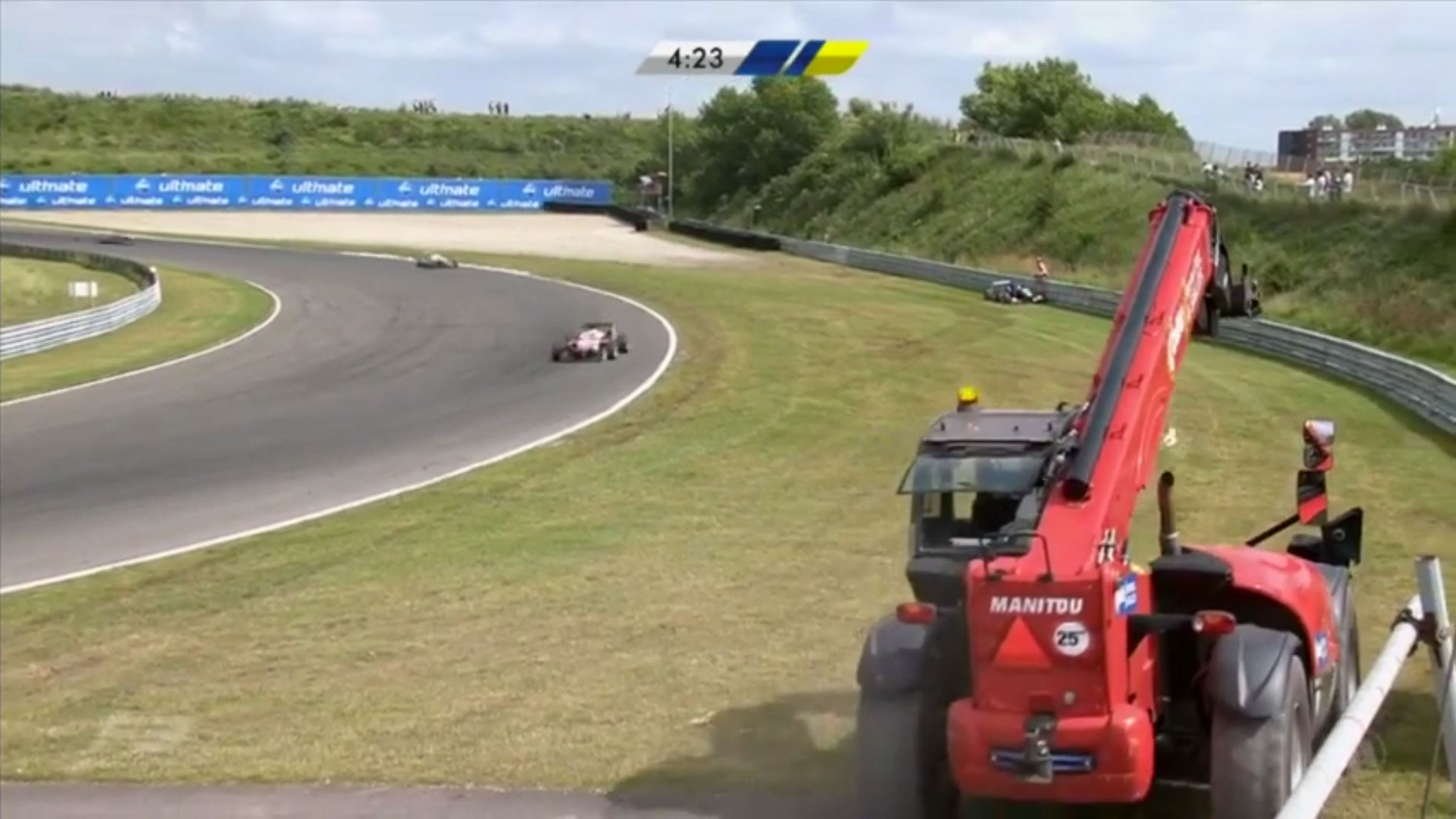 The use of a crane to recover a stranded car during a European Formula Three race at Zandvoort prompted criticism over safety standards.

The crane was sent to recover Weiron Tan’s car which stopped late on during Sunday’s race (above). The incident occurred on the first anniversary of the death of Jules Bianchi due to injuries sustained in a collision with a crane during the 2014 Japanese Grand Prix.

Among those to respond to the incident on social media was Damon Hill. “Given it is the first anniversary of the death of Jules B this is somewhat disappointing,” he said.

Max Gunther took advantage of championship rival Lance Stroll’s banishment to the back of the grid in the second two races to reduce his lead to 56 points. Stroll began the weekend with his fifth win from six races but the Williams junior driver was unable to add to his haul after starting 19th in the other two.

Edoardo Mortara was left fuming after losing eight points in the first DTM race of the weekend at Zandvoort after an apparent error by the stewards. The Audi driver was penalised for speeding during a Virtual Safety Car period however doubt was later cast on the accuracy of the data the stewards relied on. The matter remains under investigation.

The second half of the NASCAR season began at the one-mile New Hampshire oval and saw Matt Kenseth take his second victory of the year.

Race video not available yet.

Will Power drew within striking distance of team mate Simon Pagenaud in the championship contest with a fortuitous victory on the streets of Toronto. Power made his final pit stop moments before a full-course yellow was thrown, handing him a substantial lead over Pagenaud.

However for the fourth race running Pagenaud’s closest rival in the points coming into the event suffered a bad weekend: Josef Newgarden crashed out after losing control of his car on a broken kerb at turn five. The Carpenter driver, still suffering the effect of his huge crash in Texas three weeks ago, was fortunate to avoid further injury.

Helio Castroneves recovered to second place after an early puncture while home favourite James Hinchcliffe fuel-sipped his way to third, aided by another late caution after Jack Hawksworth and Juan Pablo Montoya crashed.

Marc Marquez returned to the top of the Moto GP podium for the first time since April and pulled 48 points clear of Jorge Lorenzo in the championship.

We have an absolutely huge weekend of racing coming up. While Formula One heads to the Hungaroring, supported by GP2 and GP3, the World Endurance Championship returns to action for the first time since the Le Mans 24 Hours. The Six Hours of the Nurburgring is their fourth race of the year.

Silverstone will host the Formula V8 3.5 championship and NASCAR heads to Indianapolis Motor Speedway for the Brickyard 400.