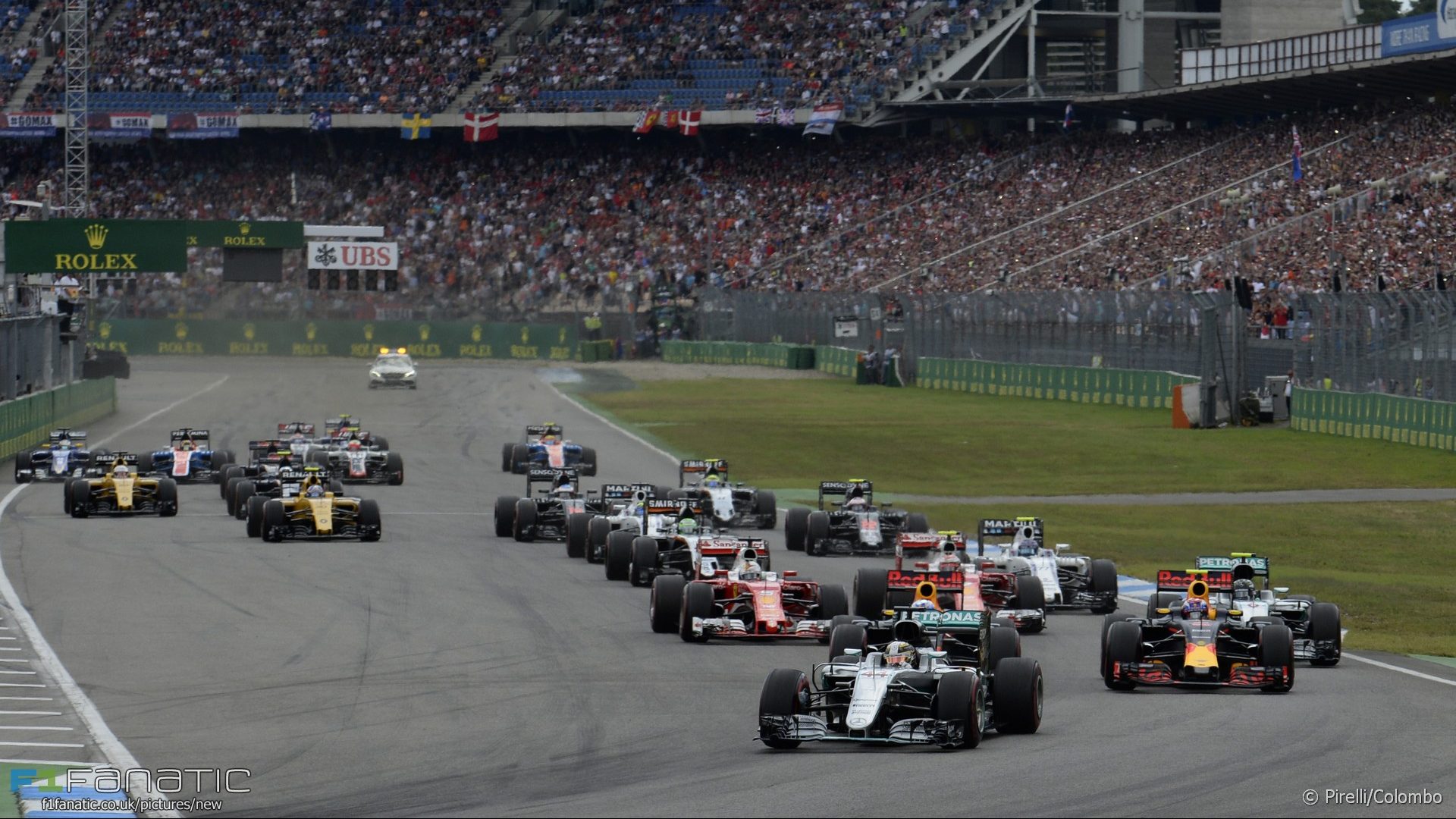 An indifferent German Grand Prix continued a run of low-ranked F1 races before the summer break began. F1 Fanatic readers rated it 5.8 out of ten, putting it among the lower end of the scores this year.

An unchallenged win for Lewis Hamilton, a hotly-debated penalty for his team mate and

A repeat of Hungary, with the start basically spoiling much of the race as the fastest guy in the fastest car managed to get into the lead and just had to cruise to win.

On lap four I really realised how bad the tyre management issue seemed to be again: every was just holding stationary with some 1.5 seconds between the cars. Then when the cars started pitting, those on newer tyres just usually cruised past those with older rubber.

Yes, there were some nice wheel-to-wheel dices (Hockenheim has definitely one of the best pieces of Tarmac in F1 for action from turn two to the stadium) but overall, once again, the race lacked that bit of excitement that would glue me to the screen.
@KaIIe

That view of the race was much the same for those who attended in person:

Watched the race from the Mercedes grandstand and was able to see pretty much every overtake in the race from up there. It wasn’t a very eventful race, especially compared to the GP2 main race, but it had its moments.

Liked the battle between the Red Bulls and Rosberg. It was nice to witness a podium finish for my compatriot Verstappen (thanks to a overly aggressive Rosberg and a faulty Mercedes stopwatch). Unfortunately there never was a real battle for the lead. Hamilton had it in the bag after turn one.
OGW (@ogw86)

That aggressive move by Nico Rosberg was one of the biggest talking points of the weekend:

Shame Rosberg got the penalty but I think the stewards had to act. If he must make such moves, he has to be very good at it. It has to be fluid and well calculated. Rosberg’s always look like he is ramming people off tracks. He needs to hone his craft. Such moves are seen a lot during every championship.

The problem is Rosberg has not learnt from top drivers. Interestingly, whenever he does it, you don’t think of “running wide”, what comes to mind is the word “force”. So the penalty would not have come if it was well executed without the clumsiness.
Tata

There was constant fighting going on, which was nice, but the front of the field was determined by strategy, which was ridiculously frustrating.

I’m not surprised by the Rosberg penalty, there is a difference between a divebomb and not turning in, see for instance the comparison between this move and Verstappen on Ericsson in China 2015, there he still makes the corner, not goes on straight and pushes off the other driver. That’s the limit, and Rosberg went over it. I was surprised Rosberg couldn’t catch the Red Bulls in the end. I was also surprised that Verstappen let Ricciardo through so easily and then didn’t get the place back, although that may well be because I’m not privy to the information.
@Hahostolze

It’s like the stewards don’t want the drivers to race against each other. Penalty this, penalty that. Come on, they’re racing drivers, not sock puppets. This is what they do.
James Brickles (@Brickles)

Not everyone was down on the German Grand Priux:

The 21 cars racing each other after turn one made it an interesting fight throughout the field. Great strategy and partnering for Red Bull. Ferrari stumbling all over themselves strategically.

Great moves by Alonso, and then let it all slip, and for Button to show how to reel in the points. And many more moves and overtakes, and not just at the end of the DRS straight.
ColdFly F1 (@Coldfly)

But for many the main event at the Hockenheimring was once again shown up by the undercard:

I needed a boring race like that after multiple heart attacks during GP2 races.
Dmitry (@Albedo)