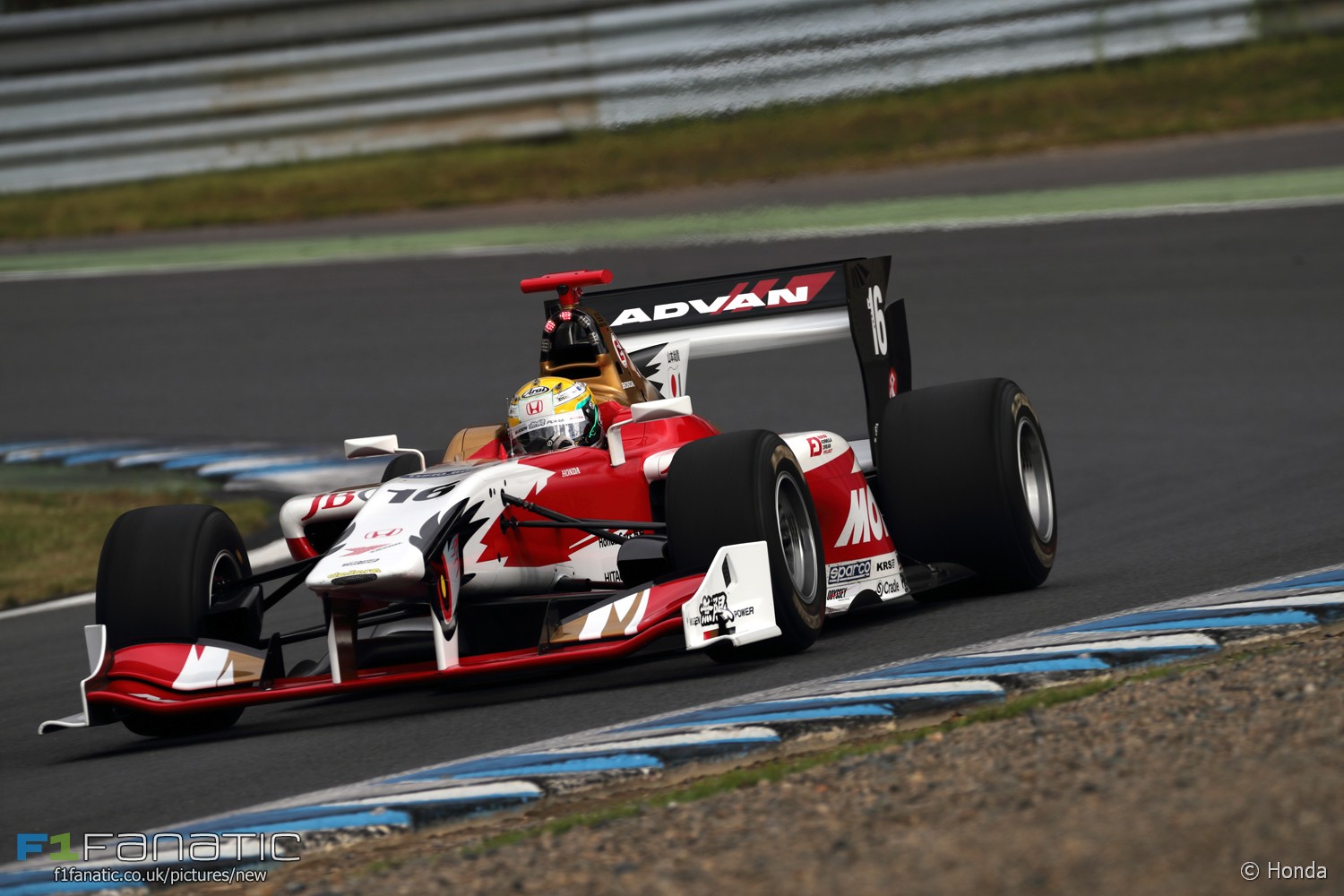 Also last weekend both NASCAR and IndyCar suffered rain delays, the Rally of Germany was suspended after Stephane Lefebvre crashed his Citroen and rain lashed the Moscow Raceway during DTM’s visit.

The trio occupy the same positions in the championship, Sekiguchi one-and-a-half points clear of Lotterer despite failing to score in the opening two rounds. Yuji Kunimoto and Naoki Yamamoto are also within three points of Sekiguchi

Honda’s top finisher at Motegi was McLaren junior Stoffel Vandoorne, who came home sixth. Despite being a lowly ninth in the standings he is just seven points adrift of the leader with races at TI Aida, Sugo and the double-header finale at Suzuka to come.

Stephane Lefebvre and his co-driver Gabin Moreau remain in hospital after a heavy crash which interrupted the Rally of Germany. Lefebvre sustained a punctured lung and broken rib while Moreau’s injuries include a broken right foot, fractured right tibia, broken left hand, damaged collarbone and cracked vertebra. He has already undergone surgery on his a leg. The incident (below) began when Lefebvre ran into the course’s notorious Hinkelsteins which spun his car into a tree.

Eric Camilli also crashed out – on stage one – while Hayden Paddon survived a high-speed spin. World champion Sebastien Ogier – for once unhindered by being first on the road – took his first win since Rally Sweden in February. However he faced stiff competition from team mate Andreas Mikkelsen until mid-Saturday. The second Volkswagen eventually slipped to fourth behind Hyundai pair Dani Sordo and Thierry Neuville, who were split by just one tenth of a second at the end of the rally.

BMW’s Marco Wittmann lost and then regained the DTM championship lead over the course of two races at Moscow Raceway. He failed to score in Saturday’s wet race but converted pole position to victory on Sunday in his 50th DTM start.

Robert Wickens won on Saturday in a race which had to start behind the Safety Car due to heavy rain. Pole sitter Gary Paffett ran wide early on, allowing Wickens through into the lead. Paul di Resta later got by Wickens for second. Maximilian Götz made it four Mercedes in the top four on Saturday but BMW did the same the following day, Wittmann leading home Tom Blomqvist, Bruno Spengler and Augusto Farfus.

Haas driver Kevin Harvixk won the 500-lapper at the tight 0.533-mile Bristol oval after a rain delay forced much of the race to be postponed to Sunday. Ricky Stenhouse Jnr finished second, his car carrying a tribute livery in honour of Bryan Clauson, the IndyCar and sprint race driver who died earlier this month.

Mikhail Aleshin claimed his first career pole position for the Pocono 500 after Ryan Hunter-Reay, Juan Pablo Montoya and Charlie Kimball all suffered crashes during practice. However for the second time this year an IndyCar race was postponed due to rain.

The race is now scheduled to being at 12:09 local time (17:09 BST) today. The drivers will then reconvene at Texas Motor Speedway on Saturday to conclude the rain-delayed race which started there in June.

Cal Crutchlow became the first British rider to win a Moto GP race in 35 years in a thrilling wet grand prix in Brno. Valentino Rossi followed him home in second despite slipping far down the order early on, while Marc Marquez finished third. With Jorge Lorenzo finishing last after once again struggling in the wet conditions, he now slips 59 points behind leader Marquez with Rossi the Honda riders closest challenger, just 53 points back.

What did you make of this weekends racing action? Let us know in the comments below.

Next weekend Formula One returns with action from Spa-Francorchamps, supported once more by GP2 and GP3. Elsewhere there is a variety of tin top action with NASCAR, IMSA, BTCC and Australian V8’s all racing.