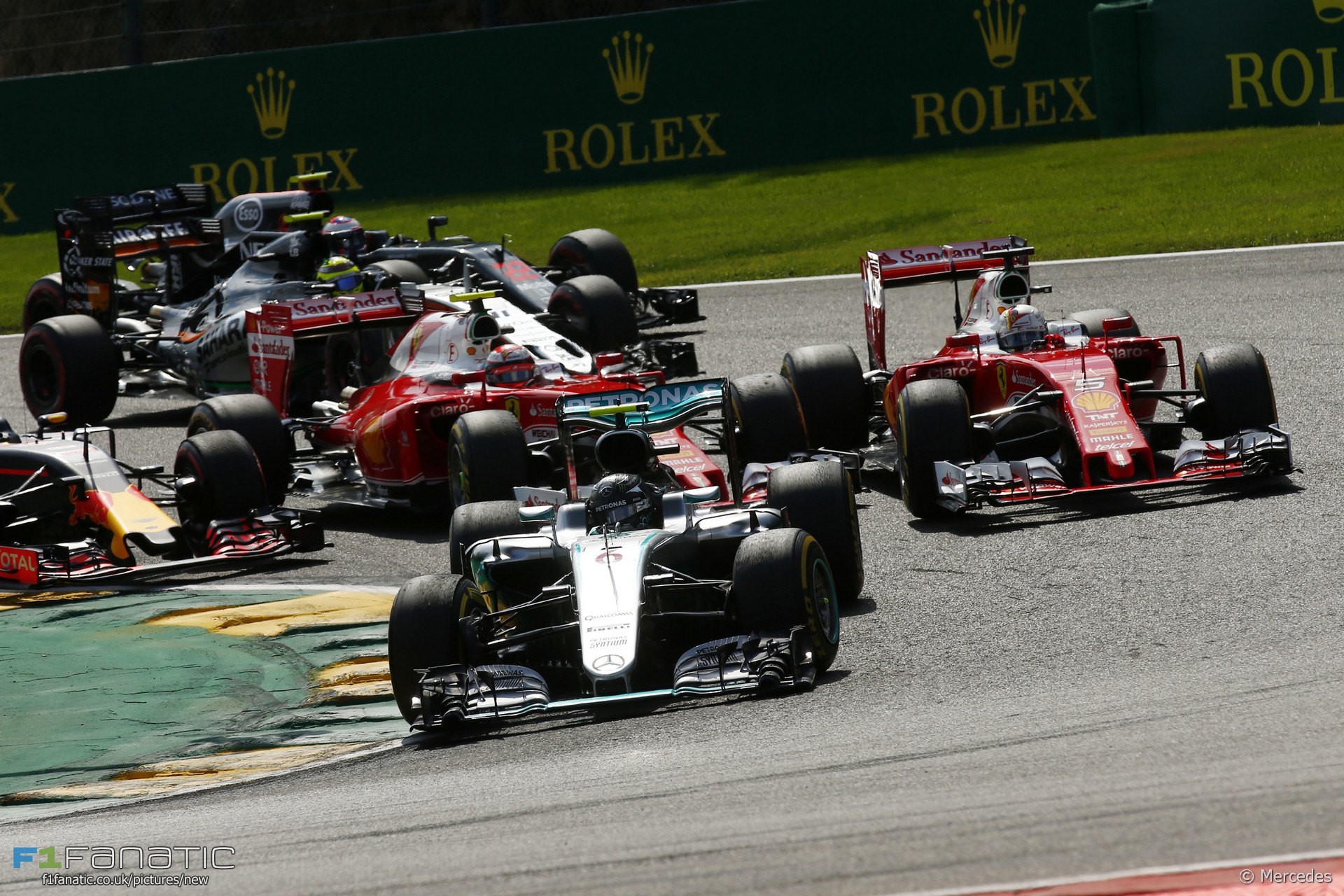 With Lewis Hamilton charging through from the back and the Ferraris and Red Bulls poised to challenge pole sitter Nico Rosberg at the front, Spa had the ingredients for a great race.

And though it got off to an explosive start, when the chequered flag fell many were left with the impression that it had failed to deliver.

While not a bad race by any stretch of the imagination, I think this was the classic race that got away from us after the Ferraris and Verstappen tangled at La Source.

The tyres acted contrary to what was expected, leaving Rosberg to cruise away unchallenged when Riccardo and Hulkenberg should really have been able to punish him on what should have been the faster tyres at the restart.

Hamilton and Alonso did brilliantly to get up the order, even with the chaos going on around them while Ocon put in a solid, if unspectacular performance on his first outing.
Craig Wilde (@Wildfire15)

I expected a lot from this race given the grid and the tyres but unfortunately the red flag ruined it for me. Thankfully that rule has been amended for next year.

It started off absolutely chaotic and really it was a shame to lose three cars from contention so early on. It was absolutely frantic until Magnussen’s shunt.

After the restart I didn’t think a great deal happened bar the great racing between Alonso and Hulkenberg in the pit exit. I spent much of the race cursing DRS underneath my breath as I have done so frequently in recent races.
Craig Woollard (@Craig-o)

Those who got to enjoy the thrill of racing at Spa first hand were much less equivocal about how good the race had been:

Was brilliant to watch from the Kemmel Straight. The crash at Eau Rouge and nearly jumped out of my skin with the tyre explosion of Sainz. Action down the field was brilliant to see unfold, all in all top weekend!
ForzaF1

The quality of driving was also a taking point:

Yes there were a lot interesting stories happening on track, but all those moments existed because – or resulted in – bad driving. Despite some of the results some drivers got, for instance Hamilton, I didn’t see any real good racing. Nobody really excelled. Tire strategy was important but when it doesn’t result in on track scraps, as viewer it doesn’t really matter. And once there finally was someone putting a driver under pressure DRS made sure it wasn’t exciting for very long.

If the stewards should receive any rating it would be one out of ten. There were numerous incidents that, while not necessarily deserving a penalty, should at least have been under investigation. For instance the Alonso/Hulkenberg pit lane occurrence. And of course the Verstappen/Raikkonen Eau Rouge incidents.
NewDust

The Verstappen/Raikkonen incident has already been covered at length elsewhere but it was a point raised by quite a few of you.

An average rating of 7.2 out of ten put the Belgian Grand Prix smack in the middle of the rankings so far this year. But if there was one aspect of the race which received an overwhelmingly negative verdict it the Drag Reduction System.

As has so often been the case at Spa in recent seasons, many of you believed the DRS effect was far too powerful and spoiled the racing:

Another DRS snooze-fest. For next year they should remove the DRS-zone on the Kemmel straight. DRS is too effective there and history shows us that Kemmel doesn’t need DRS. Removing DRS from Kemmel would also encourage drivers to overtake more at La Source or even Bus Stop.
Rick (@wickedwicktheweird)

It was a very eventful start to the race with all the collisions on the first lap and then we had the big Magnussen crash which resulted in first a safety car and then a red flag.

This meant that there were a few cars out of position compared where they qualified so we got to see some recovery drives.

I would probably have given the race a higher rating but later on it seemed to quieten down and the passes were mainly straight forward DRS moves.
@pja

Whatever happened to the idea that they would review DRS lengths over time? The one at Spa is a good 150m too long. Time to get this conversation going again.
@Roodda

DRS again ruining one of the best tracks in world. A complete waste of time considering there was no genuine racing on display. It’s races like this that make me want to to give up watching this sport. Dreadful.
Jonny Edwards (@racectrl)

DRS made the passing too easy and as a result I simply never got into it as that just isn’t the sort of racing i enjoy.
@Gt-racer

That was just a small selection of the many complaints received about DRS. But that fault notwithstanding many of you were just pleased to have F1 back after the summer break:

I have been desperate for F1 to return and I really enjoyed the race. I don’t understand people suggesting it was boring – there was all sorts happening. I do not think that the rules are perfect – and DRS etc needs to be fixed, but my heart cries to hear the same old complaints whatever the action on track. Yes DRS is rubbish. Yes, track limits needs to be looked at. Yes, yes, yes – but I really don’t understand how anyone who enjoys racing could call that a mediocre race.

It was fun, exciting, scary and the field was all mixed up – I call for more of this, while of course fixing what ails the series.
Caroline Geddes (@lass321)