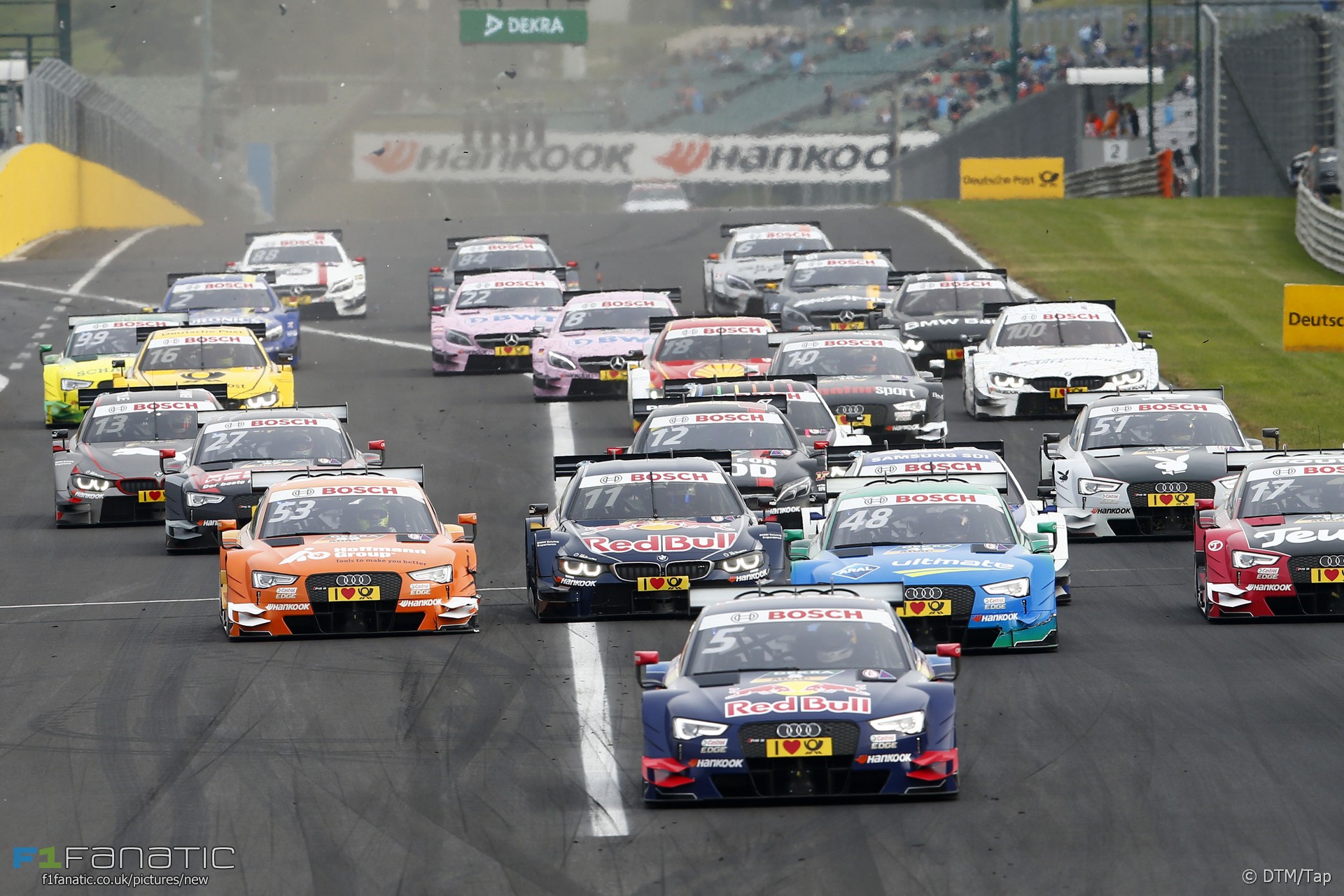 Two drivers were disqualified following last weekend’s DTM action but their teams are appealing the exclusions which could affect the championship outcome.

The Japanese Super Formula championship is also set for an exciting conclusion at Suzuka following last weekend’s round at Sugo, while another potential star of the future collected a championship at Spa-Francorchamps.

Audis filled the top six places in race one at the Hungaroring as Edoardo Mortara won from pole position ahead of Jamie Green and Miguel Molina. Mattias Ekstrom and Martin Tomczyk spun off at turn two, Paul di Resta and Antonio Felix da Costa clashed on lap ten, but a static second half of the race allowed Audi to maximise their points haul. Wittmann was best of the rest in seventh, just ahead of Felix Rosenqvist who was the first Mercedes driver home in only his fifth DTM race.

Mortara took pole again for race two but wheelspin off the line saw him triggered a very hectic first few corners: Wittmann tried to get around the outside in turn one but Mortara blocked him off aggressively, causing the BMW driver to spin across his nose and collide with Green. Mattias Ekstrom avoided the melee to take the lead ahead of Adrien Tambay and Daniel Juncadella. A puncture dropped Mortara out of contention and Green returned to the pits to retire.

After the pit stops the top three after turn one helped their places until the end, meaning Ekstrom took victory with Tambay second. Juncadella and Wittmann were third and fourth on the road, but both were excluded with technical infringements after their skid blocks were too worn. Both BMW and Mercedes are appealing their disqualifications, the outcome of which could affect the championship. As it stands the Hockenheim finale will begin with Wittmann 14 points ahead of Mortara.

Yuhi Sekiguchi became the first driver to win two races this year and eked out a 4.5-point lead in the championship ahead of the double-header finale at Suzuka. The Toyota-powered racer dominated proceedings at Sugo, winning from pole position despite seeing the his sizeable lead eradicated by the Safety Car.

Kazuki Nakajima jumped from third to second at the start, but suffered a temporary gearbox problem which saw him drop to sixth. Andre Lotterer made an early pit stop along with Joao Paulo de Oliveira and Daisuke Nakajima, putting pressure on the late-stopping Sekiguchi, but on lap 19 de Oliveira spun at SP corner and became beached in the gravel, triggering the Safety Car.

By this point Sekiguchi was running away at the front, but the timing of the safety car meant he couldn’t pit before joining the train. Stoffel Vandoorne had pitted only two laps earlier, meaning his race was also compromised.

At the restart Sekiguchi continued his dominance, lapping a second quicker than everyone else, and his superiority was highlighted when he made a second pit stop on lap 55 and still emerged with a comfortable lead. Daisuke Nakajima’s early stop gave him second position, while Tomoki Nojiri took the final podium spot ahead of Nakajima, Lotterer and Vandoorne. Yuji Kunimoto lost the championship lead after finishing a poor weekend in 15th place.

Jose Maria Lopez is assured of the 2016 World Touring Car Championship regardless of whether the next round in Thailand goes ahead: It is widely expected to be cancelled. Nonetheless he dominated the second race at the shortened Shanghai track, leading from lights to flag to win by 11 seconds over Muller. The Lada of Nicky Catsburg started from second, but a poor start saw him drop to 4th. The big mover in this race was Tiago Monteiro who recovered from 13th to 8th position, but despite this he lost ground to Muller in the championship fight. The final round*, which is also Citroen, Lopez and Muller’s last in the series, will take place in Qatar in two months.

Thed Bjork took a surprise first win for Volvo in the series in the weekend’s first race with a last lap pass on Norbert Michelisz. The eventual winner worked his way up from sixth position on the grid as Michelisz led from the start. John Filippi slipped backwards hacing started from pole, with Tom Chilton and Gabriele Tarquini taking up second and third. Bjork was up to fourth by the second lap and then set about Tarquini. Meanwhile, Filippi’s race ended on lap three when he was sandwiched between Lopez and Fredrik Ekblom. Hugo Valente then dived down the inside of all three, and the domino effect gave Filippi broken suspension.

The subsequent two laps behind the Safety Car closed the field up and on lap nine Chilton and Tarquini collided, forcing them both out of the race and promoting Bjork to second ahead of Yvan Muller. Bjork reeled Michelisz in made his move with three laps to go. Michelisz rebuffed him strongly, earning a driving standards warning. But on the final tour Bjork made the move stick to take victory by three-tenths of a second, despite receiving a post-race reprimand for his own forcefulness.

Kevin Harvick took victory at the last gasp after a very late caution, and with it took first place into the Round of 12 playoff stage of the Chase for the Cup. Martin Truex Jnr and Carl Edwards were the early leaders, but in a race with six cautions and 15 lead changes, Harvick took the lead with five laps to go. With only one race to go in this first round Chris Buescher, Tony Stewart and Austin Dillon are currently in the elimination spots.

Lando Norris clinched the Eurocup title with two races remaining despite having a rare win-less weekend at Spa-Francorchamps. The 16-year-old took a third and a second place to wrap up the title. It’s his second crown of the year, having already won the Formula Toyota New Zealand series, and he’s leading the Formula Renault 2.0 Northern European Championship as well.

Robert Kubica finished fourth in his only solo race during the Renault Sport Trophy weekend at Spa-Francorchamps. Pieter Schothorst, Steijn, Schothorst and Kevin Korjus filled the podium places in the Sprint Professional race.

Marc Marquez ended the run of eight different consecutive winners with his first home victory in two years at Aragon. He led home Jorge Lorenzo and Valentino Rossi to extend his championship lead over the latter to 52 points with just 100 available.

What racing did you watch this weekend and what did you make of it? Let us know in the comments below.

Next weekend Formula One heads to Malaysia where it will be joined by GP2 and GP3, but that’s not the only open wheel racing taking place with European F3 and Formula V8 3.5 also in action.

If you’re looking for tin-top action the WRC is back after a prolonged break with action from France, while World Rallycross visits Latvia and NASCAR continues. There are also two season finales as IMSA comes to an end for 2016 while eight BTCC drivers are in contention for that title at the Brands Hatch finale.