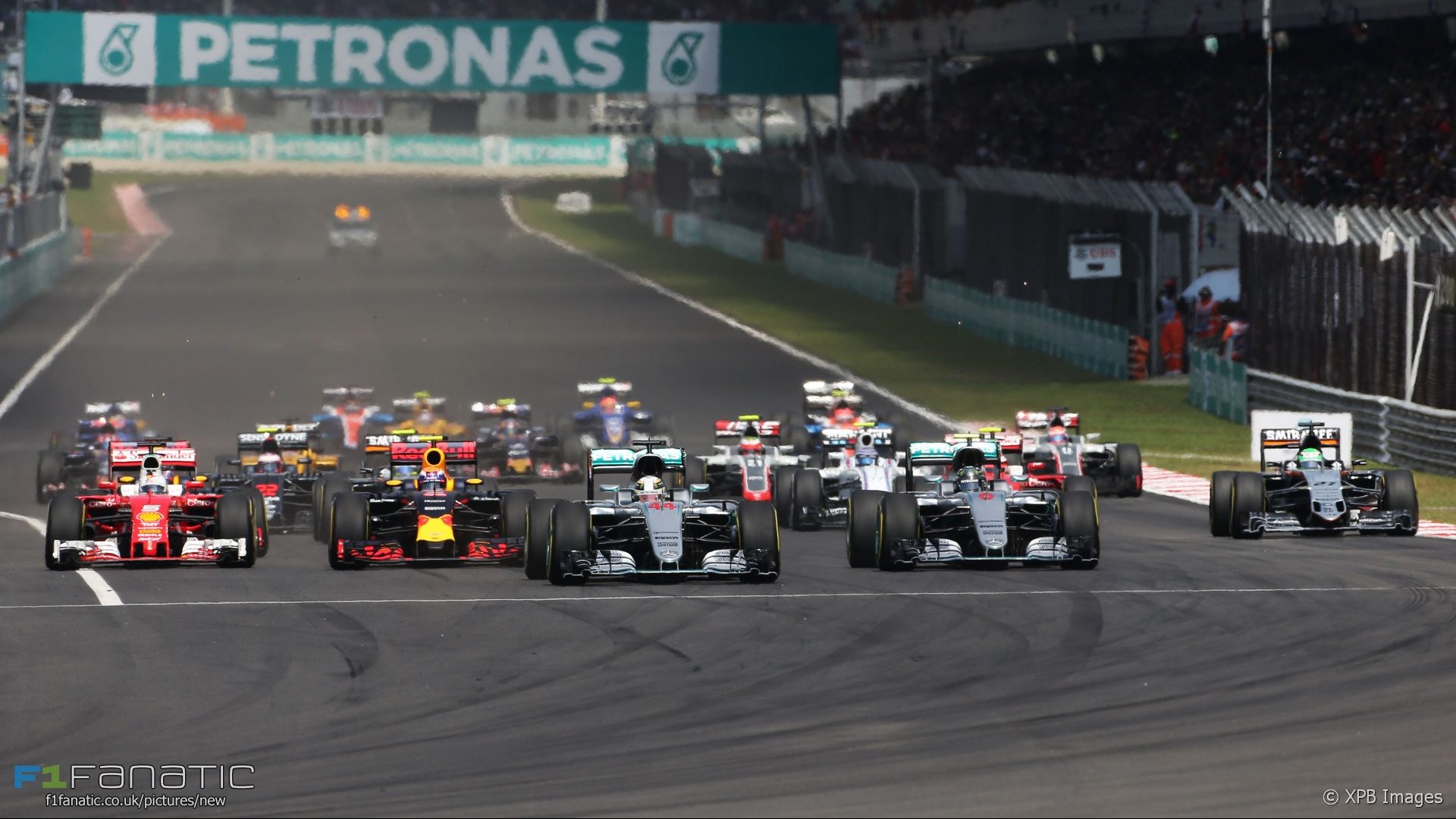 Lewis Hamilton – In top form on Saturday, his first lap in Q3 easily good enough to beat Rosberg even though a mistake forced him to abandon his last run. He started cleanly and edged clear of Ricciardo, though Verstappen led for a while after making a pit stop under the Virtual Safety Car. That might have made the latter phase of the race more interesting for Hamilton had he got there, but his engine had other ideas.

Nico Rosberg – Couldn’t live with Hamilton’s pace in qualifying and had to settle for second on the grid. He was blameless in the turn one collision with Vettel, and had to give his all as he made his way back to the front. He acted quickly and decisively to put a move on Raikkonen and collected a penalty which seemed harsher than those he’s previously had in 2016, but it couldn’t keep him from retaking third place.

Sebastian Vettel – Pipped Raikkonen to fifth on the grid and made a good start to get alongside Verstappen. He tried to pin the blame for the turn one collision on the Ferrari drivers’ favourite scapegoat, but the fact of the matter was Vettel braked too late and the stewards saw as much.

Kimi Raikkonen – Continued to show good pace compared to Vettel in the build-up to the race and only narrowly lost out in qualifying. His race was frustrated a handling imbalance caused by rubber debris in his rear wing, and the need to conserve his power unit. But he was also mugged by Verstappen at a restart and left the door wide open for Rosberg’s passing attempt, with left him with more damage to his rear floor.

Felipe Massa – Admitted seventh on the grid was possible after taking tenth, but at least made it into Q3. However a throttle problem forced him to start from the pits, from where he recovered to a decent 13th.

Valtteri Bottas – Owned up to an error with his engine settings in Q2 which probably cost him a place in the top ten shoot-out. However qualified 11th has its advantages, such as being able to start on new tyres, and Bottas took advantage of that to run a one-stop strategy. This jumped him ahead of the Force Indias.

Daniel Ricciardo – Felt his tyres beginning to go in the final sector during his qualifying lap, and ultimately was beaten to third by Verstappen. However he saved an untouched set of soft tyres by getting through Q1 having only run mediums. He fit them for the final stint having brilliantly shrugged off an attack from Verstappen, who was on much fresher rubber.

Max Verstappen – Beat Ricciardo to third place and kept a lightly-used set of softs from Q1. He also made a much better start than he has in recent races, though he was delayed by the Vettel/Rosberg collision. However he pounced on Raikkonen at the restart and took Perez soon afterwards, bringing himself back into contention for a victory. He used the second VSC period to explore a different strategy, but a later VSC period meant we never got to see if it might have brought him victory.

Nico Hulkenberg – The Force Indias occupied row four but Hulkenberg was beaten by Perez. He was also delayed by the turn one collision, which dropped him behind Button. “I just couldn’t overtake him,” Hulkenberg admitted, and he spent two stints following the McLaren. He finished eighth.

Sergio Perez – Produced another of his much-improved qualifying performances: seventh was as high as the car could manage. He took advantage of the turn one incident to briefly hold third place, but could do nothing to keep Verstappen and Raikkonen behind. Bottas also jumped him via his free pit stop.

Kevin Magnussen – Had a nasty scare on Friday when he car caught fire, but bounced back to claim a strong 14th on the grid. As a result he found himself caught up in the reaction to the Vettel/Rosberg clash, was hit from behind by Kvyat and damaged his front wing on the Haas of Gutierrez ahead. After a first-lap pit stop for a new wing he retired on lap 17 when his brakes overheated. Deserved more.

Jolyon Palmer – A set-up change before his final run in Q1 proved his undoing and he was unable to hold on to a place in Q2. However he kept out of trouble at the start and employed a one-stop strategy to minimise his time in the pits. This ultimately yielded his first F1 point.

Daniil Kvyat – Edged Sainz by a slim margin in qualifying. However he ran into Magnussen at the start and damaged his front wing, putting him out of contention for the points.

Carlos Sainz Jnr – His race began with a drama when his engine cut out as he was doing his pre-start clutch preparation. He used the MGU-K to restart it just in time for the lights to go out, and did a “mega job” (his words) at the first corner to move up half-a-dozen places. The team used an alternative strategy to keep him in the hunt for points but it didn’t pay off – he finished a few seconds behind Palmer.

Marcus Ericsson – Headed Nasr on the grid but both dropped out in Q1. He endured a tough race after his water bottle failed on the first lap in one of the hottest grands prix of the year. He was happier with his car’s pace in the race, but finished out of the points in 12th.

Felipe Nasr – Was another of the drivers who lost time going around Rosberg’s Mercedes at the first corner. His retirement was officially blamed on the brake-by-wire system, though some claimed a Ferrari power unit failure was in fact to blame.

Fernando Alonso – Used Honda’s new power unit but 45 places of penalties meant it wasn’t worth doing a proper run in qualifying. The first corner kerfuffle was a gift which moved him into the hunt for points, and a decision to use an attacking strategy paid off when another Virtual Safety Car period handed him a free pit stop and allowed him to finish in front of Button.

Jenson Button – Frustrated by traffic in Q1 but a fine effort in the subsequent sessions gained him a place in Q3 and put him ahead of Massa’s Williams, which was a bonus. He briefly held fourth on the first lap before others passed him. But while the VSC made Alonso’s race it spoiled Button, costing him the chance to claim positions back from the three-stop runners. He deserved to finish higher than he started.

Pascal Wehrlein – An electrical problem in final practice compromised his preparation for qualifying. His race was fairly straightforward as he wasn’t really in contention with the other cars, but his best lap was almost two seconds quicker than Ocon’s.

Esteban Ocon – Took advantage of his team mate’s problems to beat him in qualifying, then made a brilliant start to briefly hold seventh. It all started to fall apart when he put the hard tyre on and struggled for pace, then picked up two penalties for pit lane speeding.

Romain Grosjean – A wheel jammed on his car during Q1 and although the team were able to loosen it the delay compromised his tyre preparation. Nonetheless he made it into Q2. The problems continued in the race, where a brake failure gave him a scare and put him out early in the running.

Esteban Gutierrez – Picked up a puncture on the first lap, struggled on with floor damage, but retired when a wheel fell off his car. In need of a change of luck.