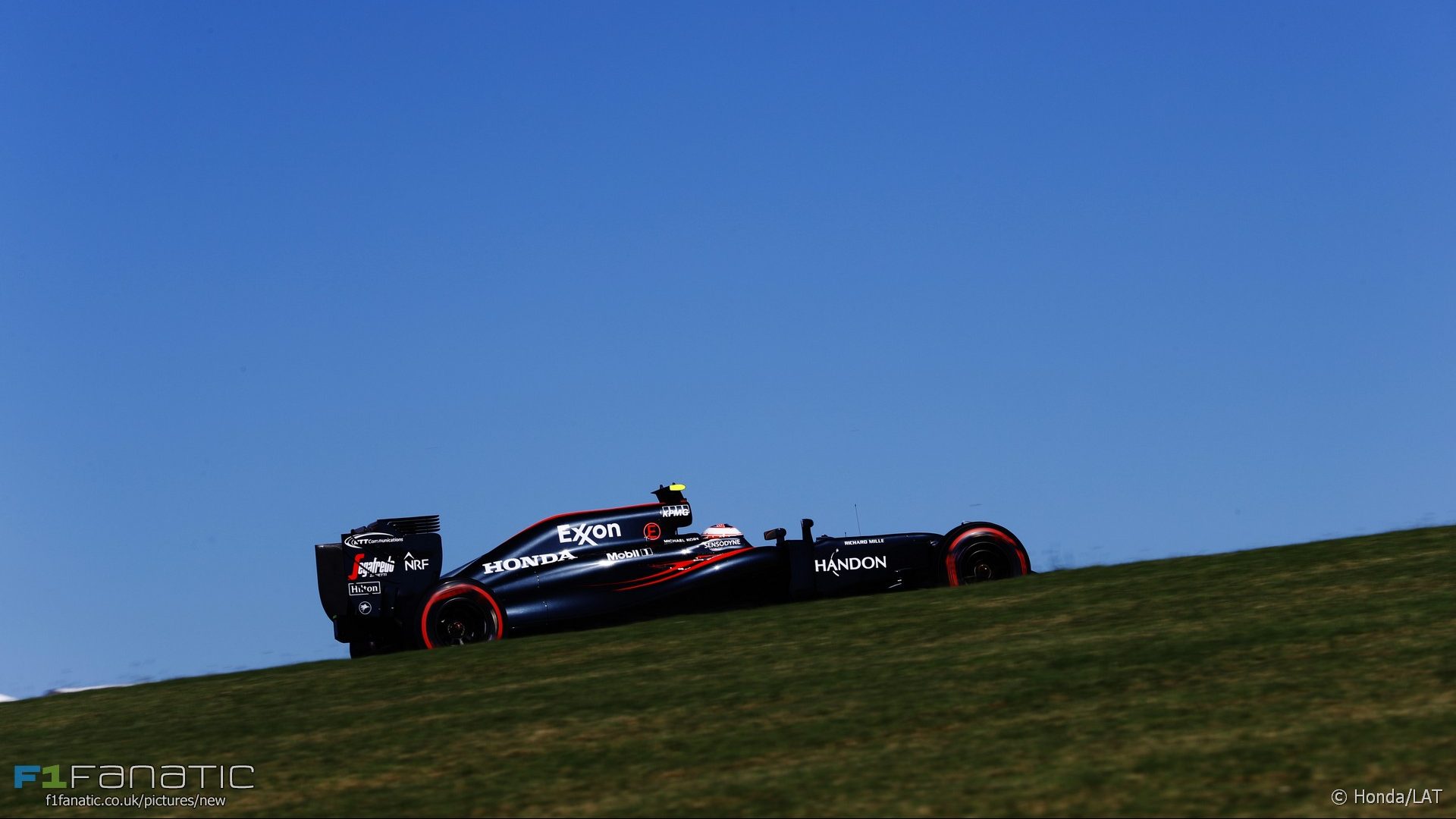 In the round-up: Jenson Button says television camera angles don’t convey the speed of Formula One.

"If you have a camera all the way down the straight, it doesn’t look very fast – even if you are doing 200mph."

"We always talk about it in driver briefings. Whether it’s bringing some gravel back or these sort of speed bump kerb things are doing the job in some areas."

Lap time predictions supplied anonymously by the teams indicate performance gains of five seconds per lap for next year compared to a lap of the Circuit de Catalunya in 2015, but another putting the increase as high as nine seconds

"On the radio it sounds like I'm arrogant, I'm not listening to the team. But that's not my message to the team. Some fans do love it, some don't. I think it's better to just don't say anything so you have no discussions."

"First, we need to understand exactly what the real situation is and if there is any change I don't know for sure what these changes are."

"We do something to do the utmost possible to make sure it doesn't happen again and we hope we get it working. We use a different material here."

"We have had our frustrations already this year. We prepare for whatever we face."

"Alonso, however, has revealed he also came close to disaster in the contact after breaking a tyre rim that was causing a slow puncture. Despite this, he did get the better of Sainz on the penultimate lap to finish fifth."

Sebastian Vettel: Ferrari has raised the bar again in 2016 (ESPN)

"Our understanding of this year's car and the cars we've recently built has become a lot better, which should help us again in the future hopefully, but I'm fairly confident on that point."

"I think what we need to do is exactly what we are doing. I don't think we are lacking anything."

"In more trouble for the beleaguered businessman Vijay Mallya, the Enforcement Directorate on Wednesday said it had approached the special PMLA court here seeking to declare him an absconder and attach his properties as he did not comply with a proclamation order issued against him."

The tricks of testing without testing (Somers F1)

"The more the chassis dynamometer is used as a driving and setup tool as opposed to just being used to validate the powerunits life cycle and performance the more that can be got from it, with more complex energy schemes used to improve on-track performance."

One of the many problems with those Ecclestone quotes from earlier is he cites Baku, Monaco and Singapore as "good races" – i.e. for racing

Monaco and Singapore have many qualities, and are among my personal favourites, but great racing is not the first to spring to mind

Here's the power unit situation ahead of this weekend's race. #F1 pic.twitter.com/AXtHeD0Nrl

.@benjhunt does his best '#F1 driver on the driver parade' impression on the shuttle to the circuit #MexicoGP #sociable pic.twitter.com/tEKi9i7jaH

Lewis is just taking it one press conference at a time. #F1 #MexicoGP pic.twitter.com/W6OE2v0Dfa

I suggest that at a minimum they should at least wait and see what the racing will be like next year with cars and tyres completely different.

Perhaps one of the reasons drivers feel the need to keep up speeds by taking license with the track edges is that they have to keep their tyres in an extremely narrow temperature window or they’ll go out of their optimum performance and durability. Perhaps with the new tires being tread wear tires rather than thermal tyres, not to mention they’ll provide more mechanical grip, drivers won’t feel the need to go over rough curbs so much.

I could easily be wrong on that, but it’s just an example, and I would wait and see what the product will be like next year before making any big decisions on things like curbing or walls or grass or gravel.
@Robbie

Happy birthday to Bernie Ecclestone who is 86 today.