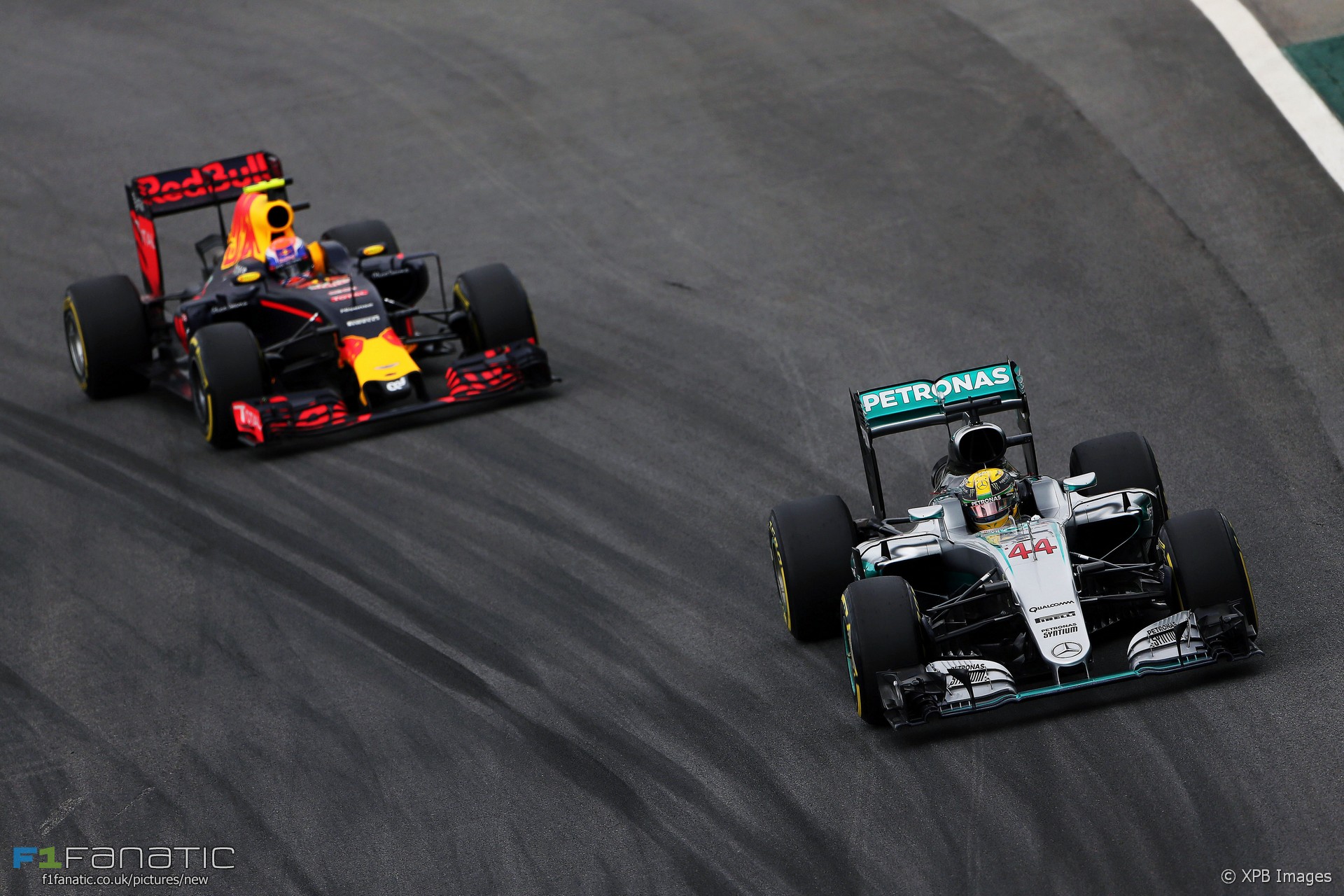 Lewis Hamilton and Nico Rosberg can forget about their rivals making any kind of concessions towards the fact they’re fighting for the championship.

Max Verstappen made that clear when asked in the run-up to the race if he would leave an extra margin when battling with either of the Mercedes drivers.

“Imagine you tell your team like ‘now I’m going to stay out of the fight, I’m just going to cruise round behind them’,” said Verstappen. “They wouldn’t be happy as well.”

“You always treat it with respect, you never try to hit each other but that’s already the whole season when you try to pull a move on them or when you are in that position. There is the same approach.”

Verstappen has been the focus of stories alleging Mercedes team principal Toto Wolff contacted the young racer’s father, urging him to tell his son not to cause any problems for the title rivals. But Verstappen’s team mate also gave short shrift to the idea they might go easy on the Mercedes pair.

“Honestly no, because I think that every race is like it’s the start of the season,” said Daniel Ricciardo.

“In Melbourne you race hard and now it’s the end of the season so I think the championship will work out how it should work out. I don’t think we should, if you like, assist in the outcome if that makes sense.”

“Just because they are fighting doesn’t mean we shouldn’t still try and make an overtake if there’s a door open. I’ll always race, I think, with respect but sure I’ll race hard.”

But will the Red Bull drivers even be in a position to take on the Mercedes? The pair were beaten to third place by the Ferrari of Kimi Raikkonen, who admitted he hadn’t been particularly happy with his qualifying lap.

“The feeling in the last lap was not so good,” said Raikkonen, “the front was sliding in the first two corners and I struggled a bit in the middle sector to put the lap together.”

“I knew that it was better than the previous one but I thought it wouldn’t be enough because it was not an ideal one.” It was enough, but on the super-tight Interlagos grid had he lost a tenth of a second he’d have started two places further back.

Ferrari’s pace improved on Saturday because the track temperatures fell. The weather forecasters agree tomorrow will remain cool. But a major point of difference is whether we will see the rain Red Bull have been banking on, and which could enliven the championship fight.

F1’s official weather forecaster UBIMET put out a revised forecast ahead of final practice stating that “race day will see overcast and wet conditions”. The race starts at 2pm local time, around when they expect the rain will be “more frequent and possibly moderate in intensity due to an approaching weather system”.

However other forecasters have revised their predictions for race day. They now predict a reduced chance of wet conditions and indicate any rain which does fall will be lower in intensity, perhaps more like the intermittent drizzle during today’s qualifying session.

In dry conditions we can expect another tooth-and-nail fight between the Mercedes drivers. Had Rosberg been able to replicate his final sector time from his first lap of Q3 on his final run, he would be starting from pole position.

Victory for Rosberg tomorrow would be enough to guarantee the championship for him. When contemplating the run to turn one tomorrow he may feel relieved that Verstappen lost his hold on third place with the final runs on qualifying.

But it was Vettel who sent Rosberg into a spin on the first lap in Malaysia. Does Toto have Norbert’s number too?

Will Rosberg clinch the championship in Brazil? Is Hamilton going to score his first win at Interlagos on his tenth attempt?

Share your views on the Brazilian Grand Prix in the comments.