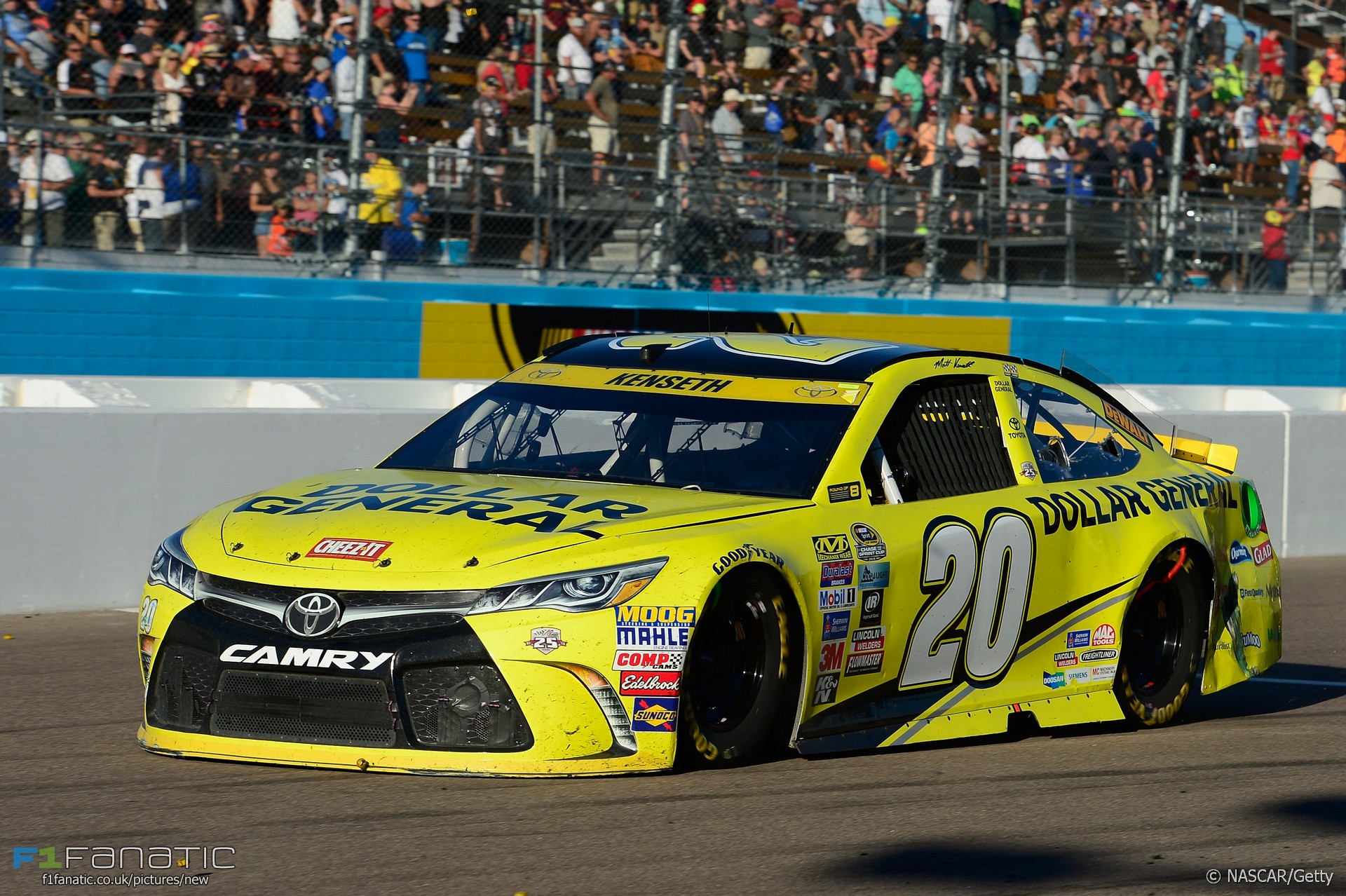 A crash after a late restart eliminated one of NASCAR’s championship contenders ahead of the final race of the season, which will take place this weekend.

Elsewhere Formula E made its debut in Africa and the Moto GP season concluded in Spain.

Matt Kenseth lost his chance to contend for the NASCAR title when Kyle Busch knocked Alex Bowman into him as he led a late restart at Phoenix. That forced a second overtime restart from which Joey Logano led Bush to the flag.

Both therefore qualify as title contenders for the final round along with Jimmie Johnson and Carl Edwards. Logano and Edwards made the cut despite having won fewer races this year than Denny Hamlin, Brad Keselowski and Martin Truex Jnr, all of which have been eliminated.

The title will be decided at the Homestead-Miami speedway on Sunday. Last year Lewis Hamilton was a spectator at the championship finale.

Felix Rosenqvist, Lance Stroll’s predecessor as European Formula Three champion, impressed by taking pole position for his Formula E second race. He led the opening laps from second placed Sam Bird until the DS racer lost out to Jean-Eric Vergne. The former F1 racer had shown good pace but missed a chance to go for pole after the team sent him out too late in qualifying.

However Rosenqvist and Vergne were too greedy with their energy supply early on. They completed 16 laps before switching cars, meaning the second had to last 17 tours of the Marraheck track.

Reigning champion Sebastien Buemi, who had started seventh after a five place grid penalty for an underweight fire extinguisher, came into play as he overtook Bird on their way into the pits on lap 17. He then closed on the economy-minded Rosenqvist in the second half of the race, breezing past to take his second win in two races. Bird also passed Rosenqvist for second while Vergne was handed a drive-through for speeding in the pit lane and finished eighth.

Lewis Hamilton dominated a very wet Brazilian Grand Prix that was interrupted by five safety cars and two red flags. Nico Rosberg followed his team mate home in second to close in on his first world championship while Max Verstappen put in a sublime drive in the final forty laps of the race to come from fifteenth to finish third.

Jorge Lorenzo won the final MotoGP race of the season – and of his Yamaha career as he switches to Ducati next season – from pole position ahead of Marc Marquez. Marquez had to battle back after a poor start while Andrea Iannone and Valentino Rossi fought hard for third, the former coming out on top in his final race for Ducati.

We are now reaching the end of many championships for 2016. The World Endurance Championship, World Rally Championship and NASCAR seasons all conclude next weekend. There’s single-seater action too as the pick of the world’s Formula Three talent head to the spectacular Guia circuit for the Macau Grand Prix.

What will you be watching, and what did you see last weekend? Let us know in the comments.