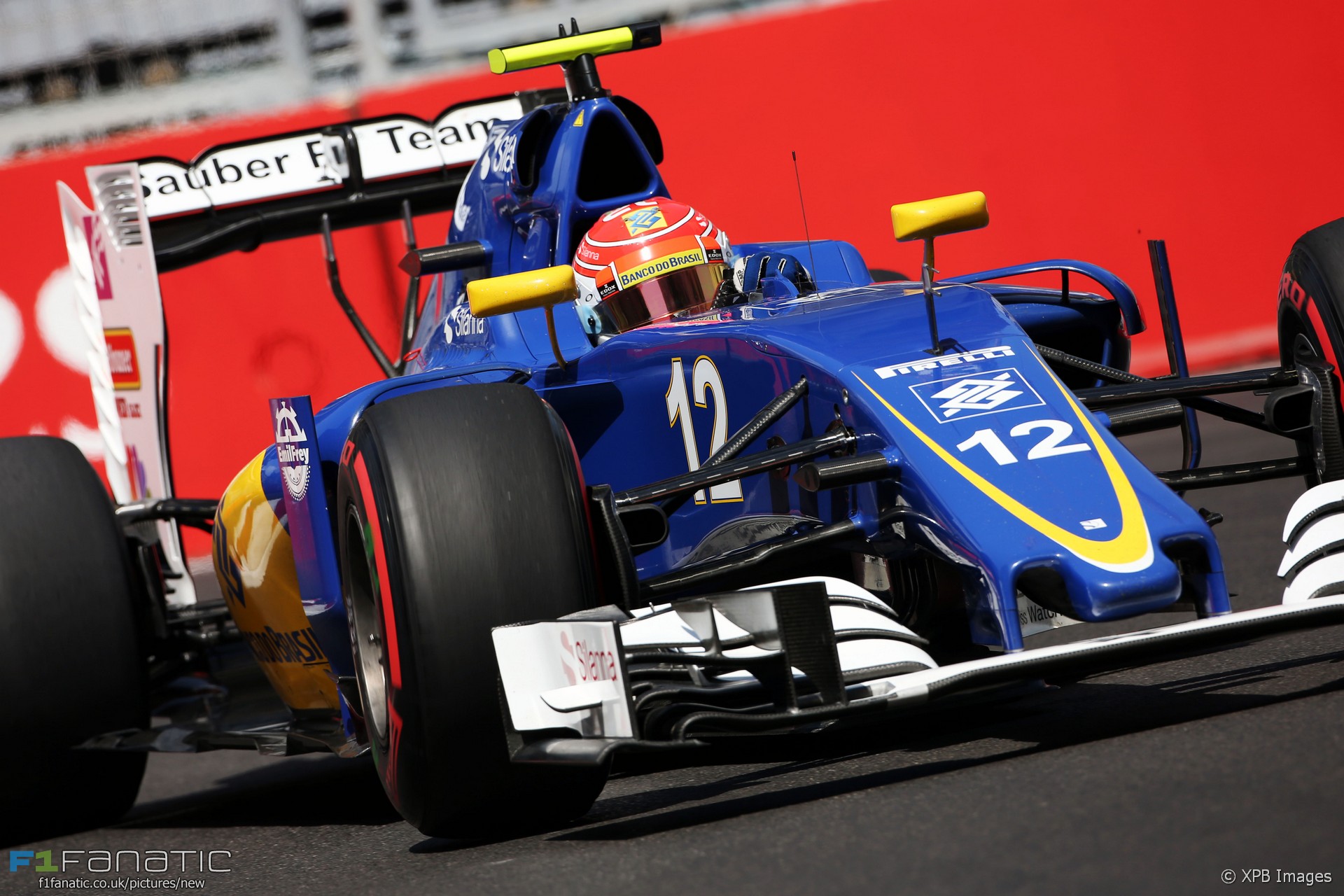 At his home race in Brazil, Felipe Nasr kept his cool in atrocious conditions and delivered a crucial ninth place for Sauber in what he called “one of my best races”.

It was the highlight of a year which had few other stand-out moments. Nasr’s second season in F1 had been rather indifferent until that point.

It got off to an unsatisfactory start as Nasr complained about problems with his car balance in the opening three races. A change of chassis for the next round appeared to cure the problem: He out-qualified Marcus Ericsson for the first time, though his race was spoiled by a puncture.

He hit a purple patch at mid-season while Ericsson had a few poor weekends approaching the summer break. Technical problems in Germany and Belgium and a conspicuously silly collision with Jolyon Palmer in Italy kept team and driver waiting for that breakthrough point.

Relations with his team mate degenerated, too. At Monaco Nasr was unwilling to obey an instruction to wave Ericsson by, not unreasonably given that he was also in traffic. The pair ended up colliding. In Mexico he was again asked to let Ericsson through and this time complied, albeit grudgingly.

Over the final third of the season Ericsson was clearly the quicker driver one more. Nasr deserves credit for making the most of the chance he had in Brazil, but it wasn’t enough to keep his season from being a disappointment.

Massively underperformed but showed what he can do in his home race.
Robert (@Rob91)

What’s your verdict on Felipe Nasr’s 2016 season? Which drivers do you feel he performed better or worse than? Have your say in the comments.

Australia – Half a second off Ericsson in qualifying, Nasr spent much of the race near the back and was passed by Button shortly before the end. “I think we have a lot of work ahead of us,” he said after the race.

Bahrain – The first driver to drop out in qualifying, Nasr was very unhappy with the balance of his Sauber. After a strong start he kept Ericsson behind to begin with but dropped behind his team mate before the end.

China – Picked up damage in the first corner incident which compromised his race, but he was pessimistic about reaching the points anyway. “I am still struggling with the same issues that I’ve been having in the last couple of events,” he admitted.

Russia – With a new chassis underneath him Nasr immediately looked more at home and bat Ericsson by half a second in qualifying. However a puncture during the first stint spoiled his run and a five-second penalty for failing to obey the turn two run-off area rules while battling Wehrlein was unnecessary.

Spain – Oversteer confined him to 20th in qualifying with only the Manors behind him. Felt a two-stop strategy meant he spent too long on the medium tyres. But though he lost a place to Magnussen on the final lap the Renault driver’s post-race penalty gifted it back.

Monaco – Having been unable to set a time in qualifying due to an engine failure, Nasr got onto his team mate’s tail during the second stint and moved ahead by waiting longer to switch to slick tyres. The pair were running close together but closing on Wehrlein and Grosjean, which explains Nasr’s unwillingness to let his team mate past. He was then turfed off at Rascasse by Ericsson.

Canada – Like his team mate he missed some running in first practice due to technical trouble, but there was no explanation for why he ended up a second off Ericsson in qualifying. In the race he was tipped into a spin at the start but having finished the first lap six seconds behind his team mate he lost over half a minute by the chequered flag.

Europe – Got the most out of his car in qualifying and took advantage of Button’s problems to reach Q2. Like Ericsson he had to pit twice but his pace was better and he got past Magnussen’s Renault for 12th.

Austria – Unlike his team mate Nasr did cop a penalty, and lined up last. However he produced one of Sauber’s most convincing performances so far this year, starting on softs and rising to seventh at one point after the Safety Car period. His tyre change eventually dropped him out of points contention, however.

Britain – Felt his car’s balance changed significantly in qualifying and ended up at the back. He stayed out of trouble in a treacherous race and even passed Bottas at one point, but points seemed impossible for Sauber.

Hungary – Nasr got his car into Q2 and showed Sauber were capable of managing a normal tyre strategy in the race. But the under-developed C35 was always going to struggle at a circuit where downforce is at a premium. Finishing two seconds behind Magnussen was a respectable effort.

Germany – Joined his team mate on the back row and took advantage of other cars holding each other up at turn one to grab 16th place. However Sauber brought him in for an early first pit stop which proved very slow, and after another slow stop he retired with a loss of power.

Belgium – Was close to making it into Q2 but his rear tyres faded at the end of the lap and he missed the cut. He picked up a puncture from debris on the first lap and although he was able to continue a damaged floor prevented him from taking any serious part in the action.

Italy – A loss of power at Lesmo compromised Nasr’s final run in Q1. He missed the cut for Q2 but still lined up ahead of his team mate. After a decent start his lap two collision with Palmer was entirely unnecessary – even the GP2 drivers had shown it was possible to go side-by-side through the Rettiflio, so what excuse did Nasr have?

Singapore – Having been pleased with his car’s performance in practice he was dismayed to struggle in qualifying with poor rear grip and difficulty getting the temperatures right. However his two-stop strategy proved the better option in the race, and he brought his car home 13th. Between the contrasting performances of the two Sauber drivers on Saturday and Sunday it’s not hard to believe a points finish was possible here.

Japan – A substantial lock-up near the end of his first stint forced him into the pits earlier than planned and meant he finished off the back of the lower-midfield pack his team mate was in.

Malaysia – Was another of the drivers who lost time going around Rosberg’s Mercedes at the first corner. His retirement was officially blamed on the brake-by-wire system, though some claimed a Ferrari power unit failure was in fact to blame.

United States – Having been happy with the car on Friday Nasr was displeased at his qualifying effort which left him on the back row of the grid. He tangled with Ocon early on, who was the only other driver to start on softs, but Nasr kept his going long enough to only make one further pit stop. That made his second half of the race on soft tyres more interesting and though he pitted too early to benefit from the VSC he ended up behind his team mate.

Mexico – A front wing failure in first practice put him on the back foot and despite using the same set-up as Ericsson in qualifying he couldn’t make it out of Q1. He was the only driver to start on the medium tyres which he stuck with for most of the race before switching to super-softs. He reluctantly obeyed Sauber’s instruction to let Ericsson through but finished half a minute behind his team mate.

Brazil – Blamed traffic and a misfire for a lap which left him last on the grid until Ocon was penalised. Another driver who steered clear of the intermediates, Nasr spent a significant chunk of the race in sixth place before Hulkenberg and the Red Bulls demoted him to ninth. He never lost sight of his goal, however, which was to beat Ocon and grab Sauber’s first points, which he achieved.

Abu Dhabi – Felt his car handled better in the heat of first practice which was not ideal with the competitive action taking place later in the day. A power unit surge during his qualifying lap confined him 19th. In the race he fell to the back after tangling with Ocon, and only finished in front of Palmer.