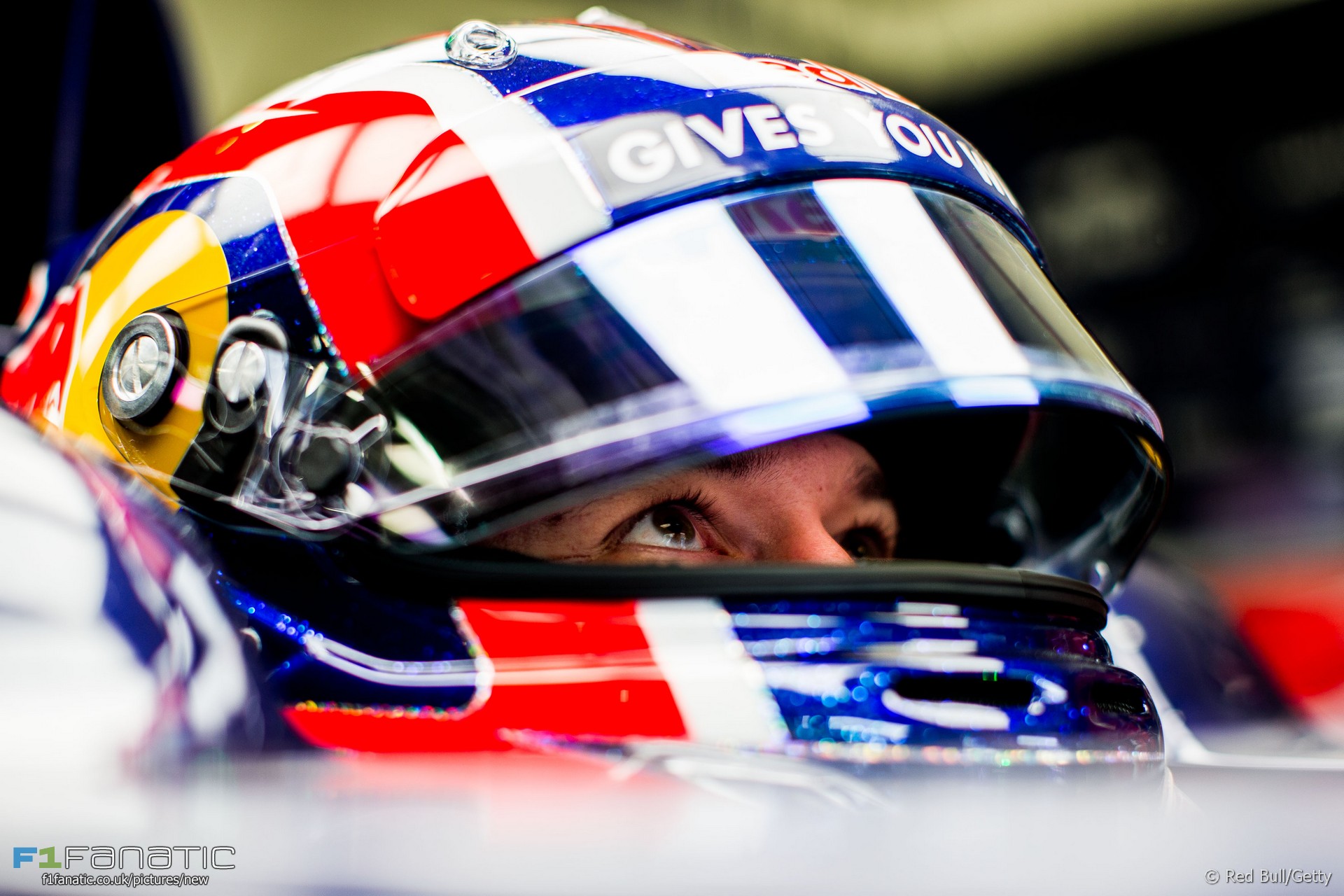 Daniil Kvyat’s demotion four races into the season was an unprecedented situation for him to cope with. Losing an F1 seat usually means exiting the sport entirely, not being shunted into your team’s junior squad where the pressures remain but the rewards are far smaller.

It had been a tough start to the season for Kvyat. He was eliminated in Q1 in Australia (then failing to start the race due to an electrical failure) and only made it to Q2 in Bahrain. A somewhat fortuitous podium in China looked like a confidence boost but then came Russia.

First Kvyat ran into the back of Vettel, sparking a chain reaction which hobbled two of Red Bull’s other cars. Then he finished off the Ferrari at the next corner, dumping Vettel into the barriers. Soon afterwards his name was being stitched onto Toro Rosso overalls.

A point in Spain raised hopes he might have landed on his feet. But Carlos Sainz Jnr proved almost as tough competition as Daniel Ricciardo, and Kvyat was at an added disadvantage of not having as much experience with the car.

It was hardly a surprise, then, that Sainz hammered him. Kvayt’s total of 25 points looks reasonable until you realise all bar four of them came with Toro Rosso. Sainz out-scored him by more than ten to one.

The slog to the summer break was long and hard. In Monaco a technical failure put him a lap down and then he crashed into Kevin Magnussen. Just when he seemed to be making progress, such as his sixth-placed qualifying performance in Baku, the car let him down. In Germany he dropped out in Q1 and looked dejected.

The last race before the break went better and on his return Kvyat showed some improvement. This wasn’t always obvious as by this point Toro Rosso had been out-developed by their closest rivals. Kvyat at least managed to hold his head up against Sainz in qualifying more often, and he had a good run to ninth in Singapore, but the overall record between them was one of the most one-sided.

He somehow makes it possible to rear-end another car three times in a single season. I’m seriously surprised they’ve kept him on at Toro Rosso.
Riock (@Addvariety)

What’s your verdict on Daniil Kvyat’s 2016 season? Which drivers do you feel he performed better or worse than? Have your say in the comments.

Australia – Having scored points on his 2014 debut at Melbourne Kvyat has failed to even start on his next two visits to the track. This time an electrical problem halted him as he arrived at the grid.

Bahrain – Dejected after another disappointing run in qualifying – although he went out in Q2 instead of Q1 he still lined up ten places behind his team mate. “We were pretty much nowhere,” he admitted. The race went much better: he made up three places at the start and ran a long opening stint to give him the benefit of fresher tyres while others were on more worn rubber. This helped him pass rivals despite the Red Bull’s lack of straight-line speed, and an opportunistic move on Massa netted a damage-limiting seventh.

China – While his team mate hit new heights on Saturday, Kvyat quietly enjoy by far his most convincing qualifying performance of the year. He made a quick start and surprised the Ferraris with a pass which was legitimate despite Vettel’s over-strenuous protestations. Had it been the other car running second at the restart Ricciardo might have had the pace to keep Vettel behind, but having to run the medium tyres at the final stint made life tricky for Kvyat.

Russia – On good form at his home track, he ended Friday only a tenth of a second off Ricciardo. Qualifying was a close run thing – he only just made it out of Q2. He didn’t have time to do a warm-up lap in Q3, so ending up three-tenths off Ricciardo was reasonable. The race was a disaster, however – two major errors within seconds of the start ruined several drivers’ races, including Red Bull stablemates Ricciardo and Sainz.

Spain – Like Verstappen, Kvyat had to acclimatise quickly to a new car. He used an extra set of soft tyres early in qualifying which led to an unsuccessful bid to accompany Sainz into Q3. He had to surrender places to Hulkenberg and Palmer early on as the stewards ruled he’d taken them under the Safety Car. A late switch to soft tyres allowed him to keep pace with the leaders and pass Gutierrez for the final points place with four laps to go.

Monaco – Was disappointed with his Q3 run which was almost half a second off his time from Q2 and a similar margin down on his team mate’s effort. An electrical problem dropped him off the lead lap but he got too ambitious trying to un-lap himself from Magnussen, earning himself a grid penalty for the next race.

Canada – Ran ahead of his team mate at the start of the race and used a similar strategy but never managed to get out of traffic. Described his race as “boring” after spending much of it stuck behind other cars.

Europe – Was able to hold his head up again after a trouble-free run in qualifying earned him a solid sixth on the grid. Unfortunately a suspension failure kept him from delivering on the car’s potential.

Austria – Got a bit greedy with the kerb at turn eight in qualifying and paid a heavy penalty as his suspension gave way, spinning him out. His race never even got going – he was out soon after the start with an as-yet unspecified mechanical problem.

Britain – Lost time behind Magnussen in Q2 and failed to accompany his team mate into the top ten shoot-out. However he salvaged a point from the race despite going off at The Loop after switching to intermediates.

Hungary – Although Toro Rosso managed to get Kvyat a late run in Q2 when the track was at its driest, he complained about losing time behind Button and said his crew did not have his tyres ready soon enough. He missed the cut – lapping over four seconds slower than Sainz – which meant he started six places behind his team mate. He was in the wrong settings at the start of the race and fell to 20th place, which made for a long day in the office.

Germany – Hit a low in qualifying with an error-strewn lap which was only good enough to beat the Saubers and one Manor. His race pace was better, however, and he had his team mate in sight at the chequered flag despite losing time when he made his first pit stop.

Belgium – Said there was little more in the car despite going out in Q1 – Sainz was less than two-tenths of a second faster. The race went well: he ran eighth after the restart having changed tyres during the suspension, and he even raced Perez before being caught by the quicker recovering cars. The car’s shortage of top speed meant he wasn’t able to keep Grosjean behind, though. “We can say we did our absolute best today, ” he reflected afterwards, “unfortunately not many people will see this, as we only ended up P14”.

Italy – Blamed Grosjean for failing to get into Q1 after catching the Haas driver at the end of his final flying lap, which Kvyat reckoned cost him two-tenths of a second. His race never really got going: He was passed by Alonso and Gutierrez and later retired due to his battery overheating.

Singapore – Needed and deserved his confidence-boosting seventh on the grid, right behind Sainz. Stuck behind Alonso early on he then slipped behind Perez too and had to give best to Verstappen after a superb tussle between the two.

Japan – A gearbox problem at the end of first practice which cost him some time in the second session. He was also vexed by an ‘octopus’: strands of discarded tyre rubber which caught on an antenna. On a tough weekend for Toro Rosso he narrowly out-qualified Sainz and finished ahead too, albeit only 13th.

Malaysia – Edged Sainz by a slim margin in qualifying. However he ran into Magnussen at the start and damaged his front wing, putting him out of contention for the points.

United States – After getting a vote of confidence from the team who announced his 2017 contract ahead of qualifying, Kvyat didn’t make the cut for Q3 as Sainz found three-tenths more in the car. He hit Perez on lap one and picked up a ten-second penalty, but his gap to Sainz at the flag was more than a minute.

Mexico – An electrical problem left Kvyat without power in Q1 and he couldn’t make it beyond there. In the race he made life unnecessarily difficult for himself by refusing to yield a position when he was told to, leading to a penalty.

Brazil – Was the quicker of the two Toro Rosso drivers in qualifying for once but his tidy lap didn’t trouble the top ten. He sacrificed track position with an early pit stop for intermediates, then was hit by Palmer. His team reckoned the damage to his diffuser cost Kvyat around 20 points of downforce, and he also picked up a puncture. The two Red Bulls ejected him from the points positions late in the race and in the final laps Alonso and Bottas demoted him too.

Abu Dhabi – Matters came to a head over Toro Rosso’s spate of recent punctures on Friday. Two further left-rear failures for Kvyat, culminating in a high-speed spin during the second session, led the team to park its cars while the cause was investigated. A brake duct was eventually found to be the culprit. The drivers therefore had to improvise in qualifying and Kvyat did best, though he couldn’t progress beyond Q1. Having moved up to 13th early on he retired with gearbox failure on a wasted weekend.