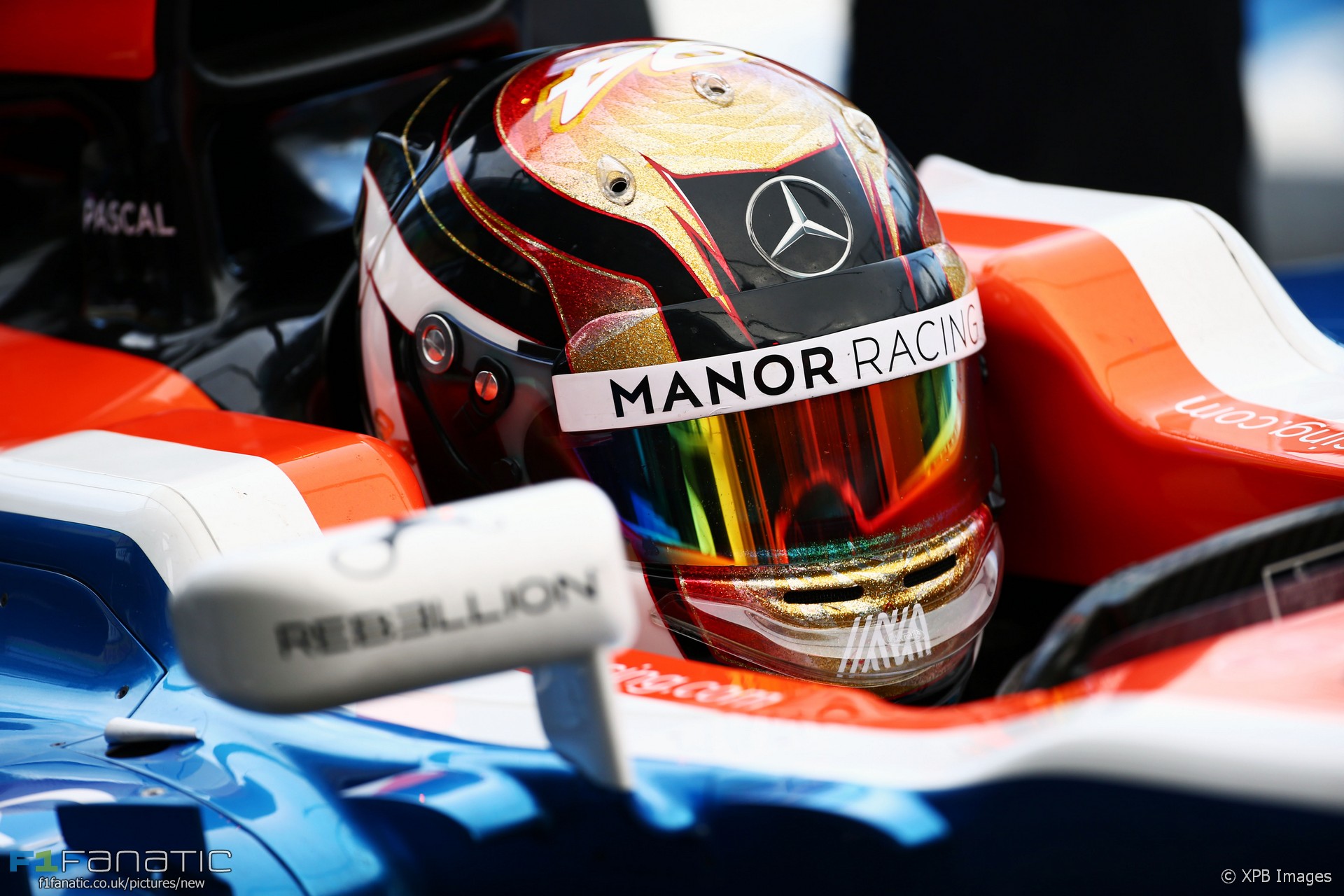 Pascal Wehrlein showed a good deal of promise in 2016 as Mercedes finally liberated the DTM champion from the world of tin-tops.

His rapid starts caught the eye early in the season. He made it up to 14th on lap one in Melbourne and gained ten places at the start in China. On the latter occasion he’d started at the back after an embarrassing crash in qualifying on a damp straight.

However by the end of the year he’d taken the Manor into Q2 on five occasions and – more importantly – bagged a point, too. This came at the Red Bull Ring, one of the few tracks he knew already from his DTM days, and one where the Manor’s shortage of downforce wasn’t too great a problem. Twelfth on the grid and tenth at the flag were his best results of the year.

Just as impressive was his gutsy approach in Monaco, where he was the only other driver to copy Lewis Hamilton by jumping straight from full wets to slick tyres, again in spite of the Manor’s aerodynamic shortcomings. This boldness caught him out at Silverstone, however, where he spun out soon after getting rid of his wet weather tyres.

In the Brazil downpour he was rather more circumspect than new team mate Esteban Ocon, who showed him the way home. Being partnered by Rio Haryanto in the opening half of the season clearly flattered Wehrlein to an extent and once his new team mate arrived life became less comfortable. The growing tension was evident when the Wehrlein and Ocon collided at the final race.

Even so Wehrlein gave a good account of himself in 2016 and deserves a return. Given recent events, missing out on the Force India seat to Ocon may turn out to have been a blessing in disguise.

The best backmarker driver of the season. He managed to get into Q2 many times this season in a car which I think is the worst on the grid. He also scored a point in it which almost leapfrogged Sauber.
@Ultimateuzair

What’s your verdict on Pascal Wehrlein’s 2016 season? Which drivers do you feel he performed better or worse than? Have your say in the comments.

Australia – A superb start for Wehrlein saw him leap from 21st on the grid to 14th, but what was arguably even more remarkable was that he held the position until he pitted. Unfortunately this was several laps before the Safety Car came out and as he’d switched to soft tyres he was left at a disadvantage. He reached the chequered flag but finished last.

Bahrain – Starred in qualifying by placing his Manor an excellent 16th on the grid. He improved on that in the race, taking advantage of the opportunity to race against and pass the Force Indias, and professed himself happier with Manor’s tyre degradation.

China – Had an embarrassing crash in qualifying when his car snapped out of control on a damp bump on the pit straight. “I guess I was just unlucky as there was nothing I could do,” he said. But he made another great start, gaining six places, and staying out during the Safety Car briefly put him fourth. He was only ever going to slip back from there, however, and despite sticking to the softer compounds he was 18th at the flag.

Russia – Lost some time having his floor replaced on Friday, and had a quick spin on the slippery track as well, which was by no means unusual for any of the drivers. Pipped Haryanto in qualifying, but after a feisty scrap with Nasr in the race his tyres went off and a second pit stop meant a wasted race.

Spain – The Manor’s lack of downforce was revealed by its clear position at the top of the speed trap. Wehrlein felt the team could qualify no higher than the back row and he was proved correct. Despite tyre degradation worries he made a two-stop strategy work but lagged behind the midfield.

Monaco – The only driver besides Hamilton to avoid running on intermediates, Wehrlein played himself into a potentially strong position. He was partly undone by Bottas passing him illegally off the track and holding him up which allowed Verstappen by. However more of the damage was self-inflicted, with ten-second penalties for speeding during a Virtual Safety Car period and failing to obey blue flags.

Canada – Both Manor drivers had some familiarisation to do in their first event at Montreal. But Wehrlein looked least in need of it, particularly after a brilliant first run in Q1 which put him in contention for a Q2 place, which he eventually missed by just 0.15s. He held onto his place at the start but floor damage compromised his car’s performance and he lost a place to Ericsson. However he beat the delayed Nasr to the flag.

Europe – Wasn’t able to use DRS on his last qualifying effort and started 18th. He tried to make a one-stop strategy work and ran as high as eighth at one point before slipping back. Manor left his first pit stop until after half-distance so he actually regained some places from drivers who were making their second stops before coming in himself. For all that he was down in 19th when his brakes gave up.

Austria – Clearly revelling in a track he knows well and enjoying the benefit of Mercedes power, Wehrlein took Manor to the rare heights of 12th in qualifying. He accidentally lined up tenth on the grid but had the presence of mind to reverse his car into the correct slot. He steered clear of the super-softs in the race, running two stints on ultra-softs then going to the end of softs. This paid off handsomely, and Perez’s late retirement promoted him to tenth for a point.

Britain – Driving at Silverstone for the first time, Wehrlein was pipped by Haryanto by a few hundredths in qualifying. Switching to intermediates at the first available opportunity in a chassis not renowned for its downforce levels proved a gamble too far – he spun out when he reached Abbey for the first time.

Hungary – The final red flag in Q1 came out eight-tenths of a second before he crossed the finishing lap. His lap time would have been good enough for eighth place, but as it couldn’t be counted he was eliminated. In the race he briefly ran as high as 16th before the inevitable tyre degradation caught up with him, though he still finished in front of one Sauber.

Germany – As was the case at the Red Bull Ring, Wehrlein put his track knowledge from the DTM to good use and briefly looked like snatching a place in Q2. However he was shuffled back two places at the start which left him fighting Ericsson. He finished ahead of the Sauber as well as Palmer, but the other Renault was much further ahead.

Belgium – Took his Manor into Q2 again but without any fresh super-soft tyres he could only manage 16th. He made a decent start but showed a lack of awareness by running into the back of Button and was fortunate not to get a penalty.

Italy – Reached Q3 for the third time this year and split the McLarens on the grid, though Q3 proved too far for Manor to reach. He almost got by Verstappen at the start, but lost a place to Grosjean on lap two. He changed to mediums on lap 16 which would have been a big ask for a one-stop strategy, but his car failed at half-distance rendering the question moot.

Singapore – “This is a track where you need a lot of downforce and good traction. We don’t have enough of either,” said Wehrlein after qualifying 20th. Nonetheless in the race he managed a 24-lap stint on ultra-softs at the end to keep Ericsson behind and finished far ahead of Ocon.

Japan – Experienced Suzuka for the first time on Friday and said he felt happier with his car’s balance. However gearbox problems compromised his qualifying preparation and Ocon was quicker than him again. His race pace was generally good but he lost more time with blue flags and in the pits and finished almost 20 seconds behind his team mate.

Malaysia – An electrical problem in final practice compromised his preparation for qualifying. His race was fairly straightforward as he wasn’t really in contention with the other cars, but his best lap was almost two seconds quicker than Ocon’s.

United States – Took a scolding from the team after spinning off in final practice and hesitating to switch his engine off, hoping the marshals would recover him. He made amends in qualifying, besting Ocon by a quarter of a second. He raced well too and was putting the wounded Bottas under pressure at the end.

Mexico – Said his Friday preparation was the best he’d had “since quite a long time” and he made good on that on Saturday, grabbing a spot in Q2. Unfortunately he went out in a first-lap racing incident.

Brazil – After a difficult Friday he was rejuvenated on Saturday and out-qualified Ocon, albeit by the tiny margin of five thousandths of a second. Given Manor’s lack of downforce it was no surprise neither driver wanted to try the intermediates, and by the stoppage both had risen into the top ten. Wehrlein slipped back more quickly, however, and a gap of almost 15 seconds had opened out between the pair by the end of the race.

Abu Dhabi – Admitted Yas Marina had “too many corners” for the Manor and found his set-up tweaks after first practice did not work as hoped in the second session. He was upbeat about the track, however, and snagged a place in Q2 at the expense of the Toro Rossos. But he made a sluggish start and tangled with Magnussen, dropping to the tail of the field. A slow pit stop compounded his problems but he still managed to finish in front of the Saubers.