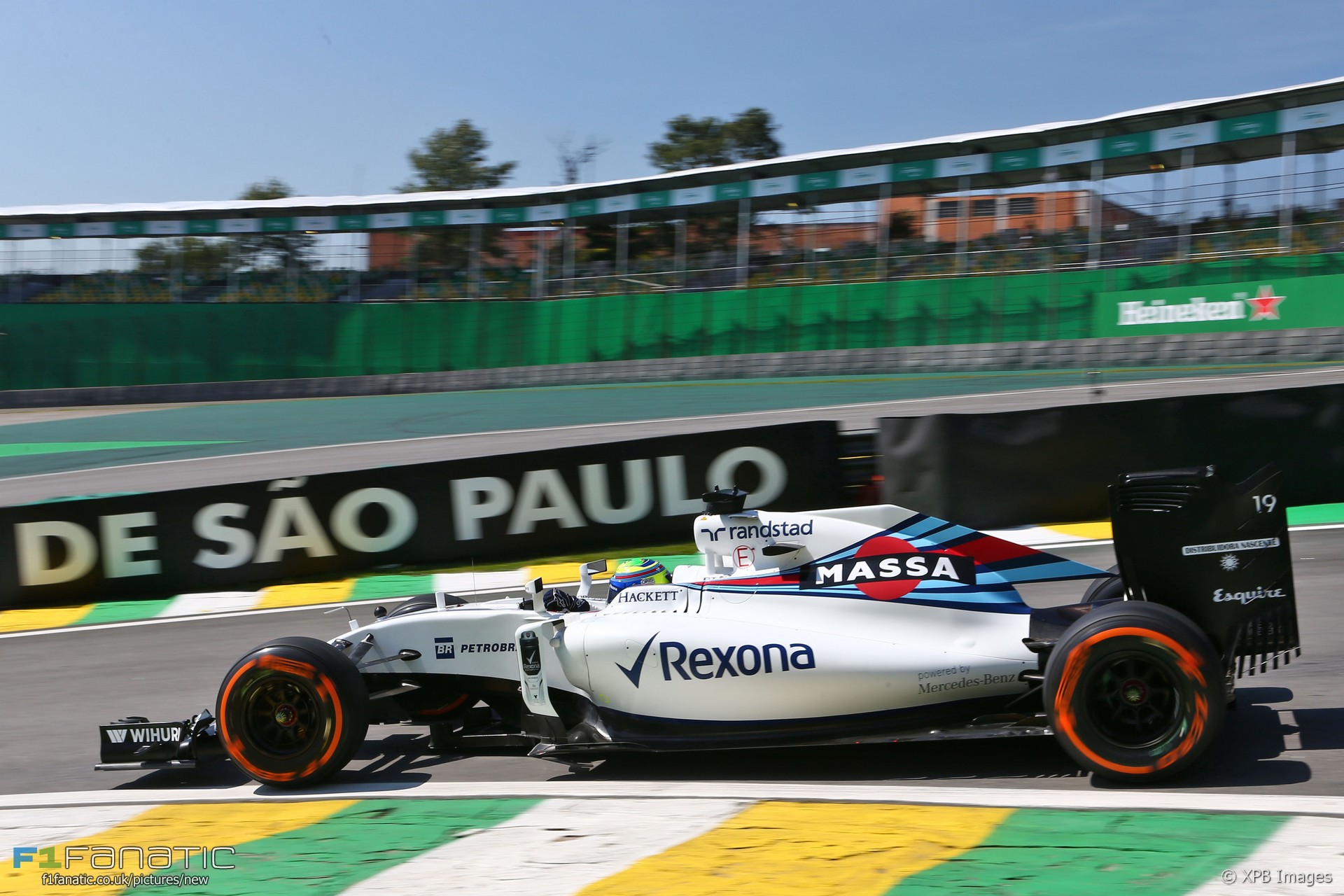 In what turned out to be Felipe Massa’s final season the stronger areas of his game were less emphatic and his weaknesses were more clearly exposed.

The latter was especially clear in qualifying where he suffered a thumping 17-4 defeat at the hands of Valtteri Bottas.

He had begun the season well with points in all of the first six races including a pair of fifths. But over the next half-dozen grands prix he contributed just one point to the team’s tally.

Pit lane starts in Austria and Malaysia (having qualified seventh) due to technical problems didn’t help matters. Nor did being hit by Jolyon Palmer at the Hockenheimring. However in Hungary Massa was the architect of his own demise, crashing in qualifying and coming home 18th, nine places behind Bottas.

After announcing his retirement at Monza the final races of Massa’s career were more fruitful. However an opportunity to take a bite out of Force India’s points lead at Austin was squandered as he dithered behind Sainz and was mugged by Alonso. His final home race ended in disappointment with a crash.

At least he was able to bounce back with a final points finish at his swansong race in Abu Dhabi – and he kept Alonso behind this time.

It seemed like Massa was calling it in for most of the season. Struggling to think of any highs. Which is a shame because he’s had a great career and he is a true gentleman.
@GeeMac

What’s your verdict on Felipe Massa’s 2016 season? Which drivers do you feel he performed better or worse than? Have your say in the comments.

Australia – Out-qualified Bottas but was pipped to fifth by a few hundredths of a second by Verstappen. Massa’s car looked a handful in the early laps and Hamilton passed him with little difficulty. It was no surprise to see him come in early for a set of softs but Williams exchanged them for the medium compound during the stoppage. That set him on course for fifth place – Ricciardo had little trouble passing him on super-softs towards the end but as the rest were bottled up behind Grosjean it mattered little that Massa’s pace dropped off as severely as it did.

Bahrain – Williams only had one example of their new front wing for Bahrain and Massa received it by dint of being their leading driver in the championship going into the weekend. It proved a mixed blessing: the new part only arrived in time for final practice and although it gave the car a stronger front end it left Massa scrambling to rebalance the FW38. Having grabbed second at the start he slipped back on medium tyres and an error while being lapped by Rosberg opened the door for Kvyat to push him down to eighth.

China – His Friday running was disrupted by two left-rear tyre blow-outs. He also did not have use of the FW38’s new front wing and was caught out by the red flag in Q2: the upshot was he missed a place in Q3. He got ahead off Bottas at the start, however, and stayed there until the end, though Raikkonen bumped him down to sixth.

Russia – Was only a tenth of a second off Bottas on Friday and stayed within range of his team mate in qualifying. He wasn’t as quick in the early phase of the race on super-softs, and a late charge after a free pit stop didn’t help him progress.

Spain – Had one shot to get through Q1 but fell well short of his team mate’s time and missed the cut. But thanks to a solid driver, smart strategy and more impressive work by the Williams pit crew, he probably only finished two places lower than was possible. An early pit stop put him on a three-stop strategy which gave him more time in clear air.

Monaco – His Thursday crash was a rookie mistake. After being shaded by Bottas in qualifying, Massa took advantage of his team mate getting stuck behind Wehrlein to move ahead and ran a long stint at the end to nab the final point.

Canada – Crashed in the first practice session because of a fault with the DRS on a new-specification rear wing, which left him unable to run some new parts. Nonetheless he qualified close to his team mate. He slipped back from Bottas in the first stint and was given the opportunity to pit first, but he still dropped behind Rosberg. Soon after Massa’s car began to overheat, ending his race.

Europe – Didn’t click with the circuit as quickly as Bottas did but qualified ahead. Rear tyre degradation was the story of his race, forcing him to make an extra pit stop as he fell to tenth place.

Austria – Didn’t get out of the pits early enough at the end of Q3 to be able to do a third run on slicks, and ended up at the bottom of the top ten. Making matters worse, a front wing change on Sunday morning consigned him to a pit lane start. He looked on course to recover some points until a puncture forced him in for an extra pit stop, and he retired soon afterwards with braking problems.

Britain – Struggled in Q2 and failed to make it into the final ten. He moved into the points during the race, despite being elbowed aside by Vettel, but made an extra pit stop for softs which dropped him out of the top ten.

Hungary – Didn’t have access to the new Williams floor but also spoiled his qualifying by crashing on the wet track. His car was repaired overnight but a problem was discovered with his steering rack after his reconnaissance lap and Massa wasn’t able to get it fully to his liking before the start. A game effort to pull off a one-stop strategy did not work and he had to make a late extra pit stop.

Germany – Needed a late effort in Q2 to reach the final ten after being held up by Sainz. In the race he was tapped by Palmer early on and suffered damage which compromised and eventually ended his race.

Belgium – Software problems compromised the qualifying efforts of both Williams drivers but Massa was six-tenths slower than Bottas. He benefited from the first-lap chaos to move up to fourth but then pitted immediately to get rid of his super-soft tyres. He tried to get to the end with a single further stop but his tyres had gone in the closing laps. He was told to let Bottas through and after initially resisting he complied, then was demoted to tenth by Raikkonen.

Italy – Qualifying gave cause to view Massa’s decision to retire as a timely one: he was half a second off Bottas and missed the cut for Q3. He made amends with a decent start which got him up to eighth, but he was jumped by Verstappen at the first round of pit stops. He was a much closer match for Bottas on race pace, though.

Singapore – Backing off for yellow flags in Q2 might have cost him a place in Q3, though he was slower than his team mate. Running three stints on the softest tyres didn’t work out: he kept falling into traffic and having been ninth early on he finished out of the points.

Japan – Right on his team mate’s pace in practice, Massa was pipped by his team mate in qualifying and picked up a reprimand for driving too slowly. He was somewhat fortunate to finish the race in front of Bottas. With both Williams drivers making a single pit stop the team’s decision to bring Massa in two laps earlier, and the fact his pit stop was quite a bit quicker, decided this battle.

Malaysia – Admitted seventh on the grid was possible after taking tenth, but at least made it into Q3. However a throttle problem forced him to start from the pits, from where he recovered to a decent 13th.

United States – All-but matched Bottas in Q1 and Q2, and only a tenth away in the final part of qualifying. With both Force Indias and his team mate suffering a setback at the start it fell to Massa to capitalise for the team, but he ended up seventh behind a Toro Rosso and a McLaren. The Virtual Safety Car went against him, but dawdling behind Sainz gave Alonso the chance to pounce.

Mexico – Was well off his team mate’s pace on Friday, complaining about variation in grip levels from the tyres, and the situation changed little on Saturday. He got ahead of Bottas at the start put his team mate passed him early in the second stint as Massa struggled with his tyres. His straight-line speed kept him safe from Perez, however.

Brazil – The Williams clearly preferred the hotter conditions on Friday so it wasn’t a great shock to see Massa fail to make the cut for the top ten when the temperature fell on Saturday. The FW38 liked the rain even less and Massa slipped up by passing Gutierrez before the Safety Car line, earning a penalty. His pace on the intermediates at mid-race was good enough to prompt Bottas to go the same way, but as the rain worsened Massa struggled and eventually aquaplaned into a wall.

Abu Dhabi – The Force Indias separated him from his team mate at the end of his final Friday in F1, but he beat his team mate to take a place in Q3. Bottas passed him early in the race, then retired, leaving Massa to collect points for ninth. He ended his F1 career in fighting style, trying to find a way past Perez while simultaneously fending off Alonso.