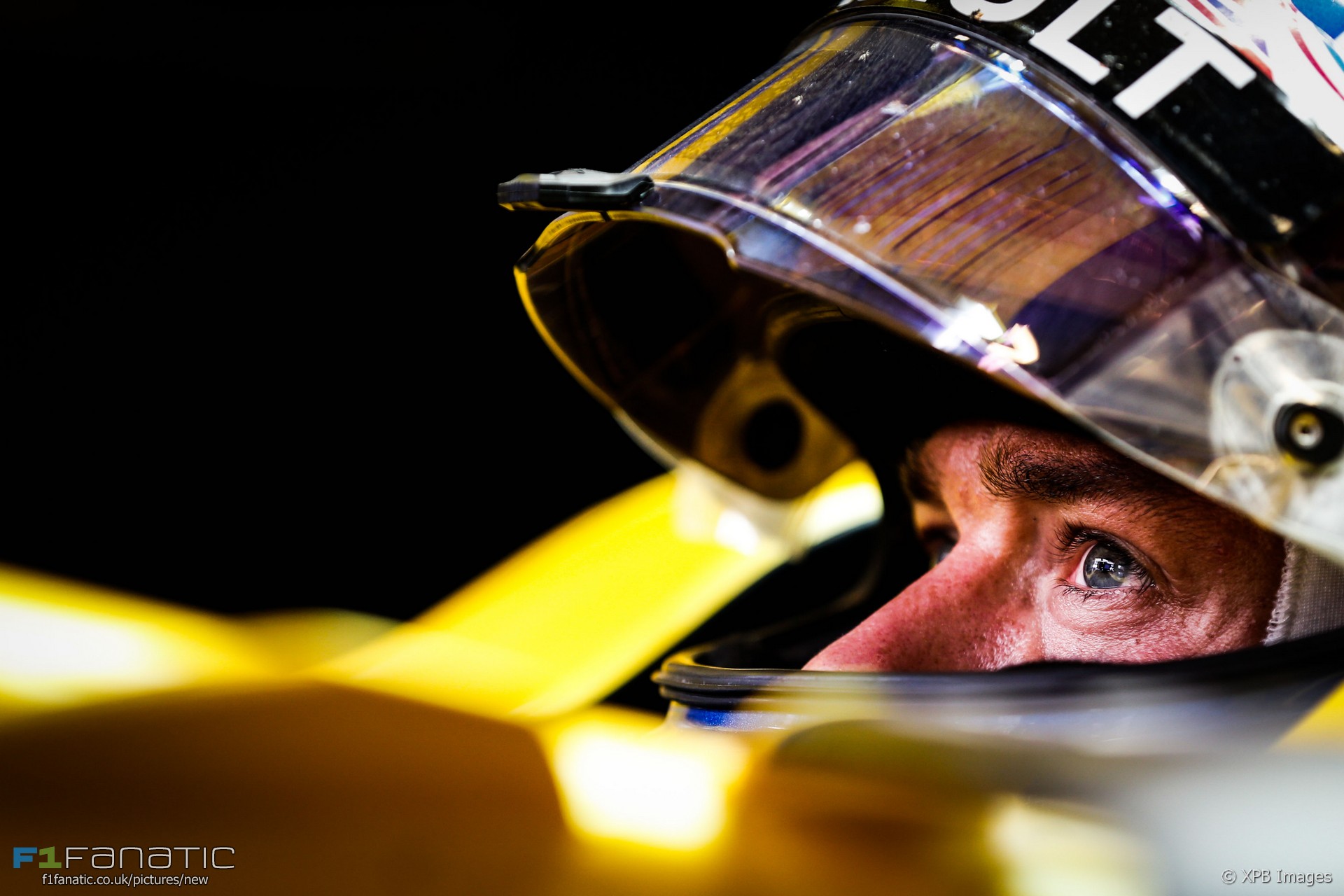 After taking a few races to play himself in Jolyon Palmer got on terms with team mate Kevin Magnussen’s pace despite had a few scrapes along the way. He also surprised many by landing a second season at Renault.

The opening rounds were tricky for the F1 rookie: he spent the first race getting overtaken, didn’t start the second one due to a hydraulic fault and grappled with tyre degradation on his way to last in round three. By Friday in Sochi Palmer was on a low, vexed by his car’s handling.

But tweaks to the RS16’s floor on Saturday gave him new confidence and from then on his form visibly improved. By the end of the year he was arguably the stronger driver in qualifying, reaching Q2 in all of the last five races bar Mexico (where a cracked chassis kept him from running).

His effort at Suzuka was especially impressive given his limited practice time. While Magnussen won the qualifying battle, Palmer progressed beyond the first round once more than his team mate.

Success on race day was harder to come by with the RS16’s under-developed chassis and third-best power unit. Magnussen scored early on in the campaign and it seemed Palmer was feeling the pressure to match him: he spun off while running in the points at the Hungaroring.

A spate of crashes didn’t help matters. Monaco was a bruising experience involving three crashes, the last of which put him out of the race early on. He rammed Felipe Massa in Germany and Carlos Sainz Jnr in Abu Dhabi. Palmer also tangled with Daniil Kvyat in blinding spray at Interlagos.

He finally came good in Malaysia, snatching a point from 19th, and more goods news followed soon after when Renault re-signed him for 2017.

Did better than we all expected, enough for a 2017 seat, but hardly set the world alight, and was error-prone.
@Lolzerbob

What’s your verdict on Jolyon Palmer’s 2016 season? Which drivers do you feel he performed better or worse than? Have your say in the comments.

Australia – Showed little sign of being race-rusty despite having spent last season as a test driver. Showed maturity in a wheel-to-wheel scrap with Bottas, although the Williams driver got the better of him, as did the Toro Rosso pair. There was likely little he could have done to ensure the Renault finished ahead of those cars, and he wasn’t far off a debut point at the flag.

Bahrain – Renault’s pace was much weaker in Bahrain but Palmer qualified just a couple of tenths off his team mate. However he failed to start the race due to a hydraulic problem.

China – The other Renault driver was even less happy after being the last driver to see the chequered flag. “The balance of the car was all over the place,” he said, “tyre degradation was bigger than usual and the pace wasn’t as good as previous races”.

Russia – Still unhappy with the balance of his car after China, Palmer was pessimistic about his prospects for the weekend on Friday. He turned it around on Saturday after changes to his floor, and was just a tenth of a second off Magnussen in qualifying. He stayed in touch with Magnussen in the first stint but pitted earlier, and his pace dropped off sooner on the soft tyres. He dropped behind Ricciardo and finished six places behind his team mate.

Spain – Sat out first practice while Esteban Ocon drove his car and was delayed by a puncture in the second session. He only narrowly missed a place in Q2. Delivered what he called his best performance to date in the race, stretching out his stint on hards until the end unlike Magnussen, but points weren’t in the offing.

Monaco – Tabac, Swimming Pool, Sainte-Devote: The three scenes of Palmer’s crashes during a bruising first weekend as an F1 driver in Monaco. His pace was not too bad, giving away three-tenths of a second to Magnussen in Q1. His race-ending crash began when he spun his wheels in fifth gear while going over a pedestrian crossing in front of the pits.

Canada – Some way off Magnussen’s pace on Friday at a track where he didn’t run during practice last year, but came close to reaching Q2 as Renault’s sole representative in qualifying. He used ultra-softs at the start but also found tyre warm-up difficult and was overtaken by Ericsson. His race was ended by a water pressure problem.

Europe – The only positive to be drawn from qualifying for Paler was that Magnussen’s time indicated there wasn’t much more performed to be found from the car. An error at the first corner at the start cost him a chance of beating his team mate, and he also flat-spotted a set of softs tyres forcing an early pit stop.

Austria – Also happier with his car, Palmer was just two-hundredths of a second off Magnussen in qualifying. However he was bumped back three places for failing to slow sufficiently in a yellow flag zone. Leading home Nasr in the race was a reasonable result.

Britain – Didn’t make it beyond Q1 at his home track. In the race he jumped ahead of his team mate due to the VSC but at his second pit stop he was released with an unfastened rear wheel and copped a ten-second stop-go penalty. The retired as a precaution after also experiencing gearbox problems.

Hungary – Had put in one of his best performances of the year so far until the car got away from him at turn four on lap 47, dropping him three places to 13th. Prior to that he’d out-qualified Magnussen in difficult conditions and got ahead of the Haas drivers with a longer first stint. “I turned in the same as normal at turn four,” he said. “I wasn’t hanging everything out and I was looking after the tyres – but for some reason I lost the car in a massive snap.”

Germany – Ocon drove his car in first practice but Palmer was soon up to speed and beat Magnussen into Q2. But he spoiled his race on the first lap by locking up his tyres at turn two and then hitting Massa which forced an early pit stop and, later, a front wing change. A weekend which had started promisingly ended up with 19th place.

Belgium – Joined Magnussen in Q2 but was four-tenths of a second slower after his final effort. Having got up to seventh at the start he lost ground by pitting under the Safety Car before the red flag. Stuck behind Kvyat at the restart he was passed by the Ferraris, the Haas pair and Bottas and had to make two further pit stops as he grappled with high tyre degradation.

Italy – A chance to bring his car home in front of his team mate was lost when Nasr took him out.

Singapore – Admitted he pushed his tyres too hard in qualifying and “the performance fell off a cliff” as a result. He picked up a slow puncture early on in the race, had to pit early and dropped behind the Manors. He eventually got ahead of them but could only manage 15th.

Japan – Had only done one lap of Suzuka before Friday so he could have done without missing much of first practice with an electrical problem. Nonetheless he made it into Q2 and reckoned he could have started as high as 12th had he not caught yellow flags on his last lap. Like Magnussen he was closer to Renault’s practice pace in the race, rising to finish 12th, despite a minor off while being lapped by Verstappen and Hamilton.

Malaysia – A set-up change before his final run in Q1 proved his undoing and he was unable to hold on to a place in Q2. However he kept out of trouble at the start and employed a one-stop strategy to minimise his time in the pits. This ultimately yielded his first F1 point.

United States – His engineer took the blame for Palmer impeding Button in qualifying, and Renault were fortune not to get a penalty. Palmer duly made it into Q2. However in the race he fell behind Magnussen and, shadowing his team mate’s strategy, was unable to get back ahead and unwilling to risk a move.

Mexico – Not satisfied with his balance on Friday evening, matters took a turn for the worse on Saturday when he clattered a kerb in final practice which surprisingly left him with a crack chassis, preventing him from participating in qualifying. He ran almost the entire race distance on the same set of medium tyres and held 12th until the McLarens found their way through.

Brazil – Despite being held up by Ocon in Q3 Palmer claimed a place in Q2. He was lining up to pass Kvyat at the restart on lap 19 when Raikkonen crashed in front of them and Palmer was caught out by Kvyat slowing down. The resulting contact ended the Renault driver’s race.

Abu Dhabi – Tyre degradation on high fuel was his concern on Friday evening but the following day he was pleased with his work, gaining a place in Q2. His race started well and he quickly rose to 11th, raising hopes of a points finish. But tyre degradation remained a significant problem and he began to lose ground, then ran into the back of Sainz, picking up a penalty.