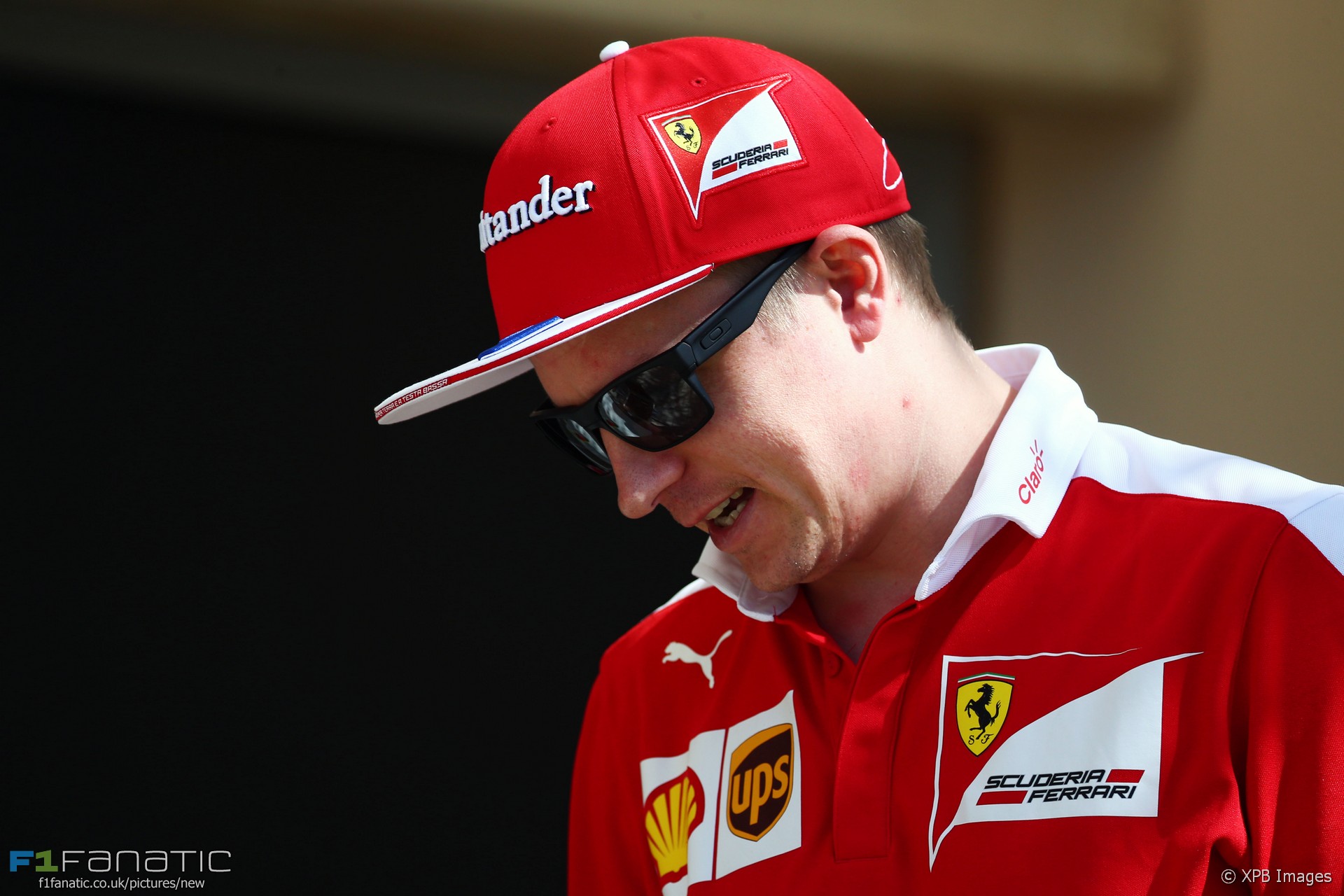 The 2016 season was undoubtedly Kimi Raikkonen’s best since returning to Ferrari in 2014. Yet he still wasn’t able to beat a team mate who was decidedly sub-par this year.

The surprising detail of Raikkonen’s campaign was that he did manage to beat Sebastian Vettel in one unlikely respect: he started in front of his team mate more often than not. This may tell us more about Vettel’s priorities but it does highlight the fact Raikkonen raised his game this year and was more comfortable in the SF16-H than his team mate.

Ferrari’s lack of sharpness on the pit wall and surprisingly poor reliability affected Raikkonen as much as it did Vettel. Raikkonen, however, was seldom leading when trouble struck: he headed the field for just seven laps all season compared to his team mate’s 82.

However the team clearly cost him better results in Montreal and Singapore (it’s hard to pick of these which was the greater strategy error), plus a fluffed pit stop at Austin. But Raikkonen can’t be exempt from criticism either.

In Monaco, where his weekend had already been spoiled by a gearbox penalty, he put the car in the barriers. He also crashed out in the rain in Brazil, though under the circumstances that accident probably could have happened to anyone not enjoying Red Bull or Mercedes levels of downforce.

A more regular theme of his season was a lack of sharpness in wheel-to-wheel combat. Max Verstappen in particularly exposed this ruthlessly and Raikkonen was clearly irked by his young rival after losing out to him in Austria, Hungary, Belgium and finally Malaysia, where the Red Bull driver just plain mugged him.

The level-headed Raikkonen was a useful foil to the hot-tempered Vettel in 2016. But when the chequered flag fell Vettel was almost always the one ahead.

Raikkonen bounced back from a fairly so-so start to the year to really make Vettel do some thinking. He was sometimes caught up in incidents which weren’t his fault, but was also prone to his own errors from time to time.
@Craig-o

What’s your verdict on Kimi Raikkonen’s 2016 season? Which drivers do you feel he performed better or worse than? Have your say in the comments.

Australia – Shadowed Vettel, running the super-softs as long as he and the team dared in the first stint. But after the restart a fault caused an airbox fire and forced him out.

Bahrain – The gap between Raikkonen and his team mate ahead widened during qualifying but he claimed fourth on the grid which became third when Vettel’s car died. However a slow start dropped him to fifth and by the time he had DRS’d past the likes of Ricciardo and Massa, Rosberg was too far up the road to be caught.

China – As was also the case last year, Raikkonen seemed the more comfortable of the two Ferrari drivers. He even headed the times after his first run in Q3, but slipped up on his final run and was bumped down to third. But his race was wrecked when Vettel hit him at the first corner. Despite a damaged car, Raikkonen got back up into the top five, though his tyres went off several laps before the end of his final 19-lap stint on softs.

Russia – Said he didn’t “do any proper laps” on Friday as he grappled with the low-grip track. He was struggling most in the final sector, and an error there cost him a front row place to Bottas. He took second from the Williams driver at the start but lost it at the restart, and Hamilton relegated him another place. However he jumped ahead of Bottas for good in the pits and claimed his second podium finish of the year.

Spain – Beat Vettel to fifth in qualifying but struggled away from the line, losing three places immediately. Having re-taken Bottas before the Safety Car came out he got by Sainz when the race resumed. He was a few seconds behind the leading quartet in the middle of the race, but at the end hew drew close onto Verstappen’s tail. Try as he might, he couldn’t get close enough to attempt a pass.

Monaco – There’s nowhere worse to have a gearbox change penalty than Monaco so it was tough for Raikkonen to have to start 11th having been within two-tenths of Vettel. However his departure from the race was entirely his own fault and he was fortunate not to be penalised after dragging his battered Ferrari through the tunnel with its front wing hanging off.

Canada – Spent Friday chasing a balance but couldn’t find one and was a long way off Vettel’s pace in qualifying, complaining about understeer in turn ten. In the race he continued to struggle with tyre temperature. He was further compromised by Ferrari’s pit strategy, though that didn’t account for the majority of his huge deficit to Vettel.

Europe – Hampered by more reliability problems during practice but took fifth on the grid. In the race his pace compared well with Vettel’s considering his earlier pit stop, but he compromised himself by picking up an unnecessary penalty for crossing the pit entry line.

Austria – Out-qualified by a Force India and – astonishingly – a McLaren. He passed Hulkenberg immediately at the start and got by Button after a few laps as well. However he fell behind the Red Bulls when he pitted and although he managed to get past Ricciardo, Verstappen held him off until the end.

Britain – Dissatisfied with his car’s pace on Friday and only just made it into the top ten shoot-out after two mistakes in Q2. Despite that he beat Vettel for ‘best Ferrari’ honours, starting fifth. Perez jumped ahead of him by pitting during the Virtual Safety Car period, but Raikkonen easily took the place back later in the race.

Hungary – Did Raikkonen miss a place in Q3 solely because he was the first to set a time on a drying track? Vettel set his lap time 24 seconds after his team mate and was 1.3 seconds faster. But other drivers who had the benefit of setting their times after their team mate failed to beat them, such as Button, so track evolution doesn’t explain everything and Raikkonen could have made more of the chance he had. Starting outside the top ten meant he could spend the entire race on new tyres, and useful passes on Perez and Gutierrez early on allowed him to make the most of that strategy. But at the end of the race despite newer, softer tyres and DRS he was out-foxed by Verstappen – Raikkonen damaged his front wing trying to pass the Red Bull.

Germany – Seemed more comfortable in the Ferrari in practice and lined up fifth on the grid. However he had wheelspin at the start and fell behind Vettel, and a slow pit stop killed his chances of recovering fifth. His sixth place was never under threat, making this an unexciting race for him.

Belgium – A mistake on his first lap on Q3 cranked up the pressure for his final run but he produced an excellent lap with the exception of a small error at the final corner – one which he suspected cost him pole position. Pinched by his team mate and Verstappen at turn one, he collected front wing damage which would have ruined his race, but he was rescued by the red flag. From last he was soon on the tail of Verstappen who frustrated him once again, though Raikkonen was able to jump ahead by making his final pit stop with 20 laps to go. That was a big ask of his tyres and while he passed the fading Massa he couldn’t do anything about Alonso or Bottas.

Italy – After a “messy” (his word) second practice session he qualified alongside Vettel on row two, less than a tenth of a second between them. There was little to choose between them in the race either.

Singapore – A slight error in Q3 possibly kept him from beating Verstappen, but he looked the quicker of the two Ferraris before Vettel’s problems. He had good pace on the super-softs, stayed in touch with Hamilton, and was able to take advantage when the Mercedes driver went off. Ferrari’s subsequent strategic decision amount take taking a guaranteed fourth instead of a possible third, which was hard to fathom.

Japan – Complained of understeer on Friday but beat Vettel in qualifying by a few hundredths of a second. A gearbox change penalty wrecked his chances of a podium bid, however. He passed both the Force Indias, taking Perez with a little help from Palmer, but was jumped by Hamilton. He undercut Ricciardo at the beginning of the final stint which meant running a long final stint on hards.

Malaysia – Continued to show good pace compared to Vettel in the build-up to the race and only narrowly lost out in qualifying. His race was frustrated a handling imbalance caused by rubber debris in his rear wing, and the need to conserve his power unit. But he was also mugged by Verstappen at a restart and left the door wide open for Rosberg’s passing attempt, with left him with more damage to his rear floor.

United States – The Ferrari didn’t look capable of better than fifth, which Raikkonen delivered. Starting on the super-softs he gained a place from the soft-tyred Verstappen but was mugged by the Red Bull driver at turn 12 later on. His three-stop strategy would have put him in a strong position to take on Ricciardo had his final pit stop not gone awry.

Mexico – Complained of understeer on Friday and was the best part of half a second off Vettel but he qualified ahead despite an engine problem. In the race he was caught out by a lack of grip on the medium tyres, which he hadn’t run in practice having brought fewer sets than almost every other driver. He managed one of the race’s few passes against Hulkenberg, however.

Brazil – He confessed to a less-than-perfect start to his final lap in Q3 and was therefore surprised to take third. He was immediately passed by Verstappen at the start then was caught out by aquaplaning on the pit straight which caused a frightening crash.

Abu Dhabi – Didn’t look particularly comfortable with the car on Friday but recovered to take fourth on the grid. He picked off Ricciardo at the start and ran third, but despite having the advantage of the undercut against Rosberg he failed to jump the Mercedes. Ricciardo got him at the next round of stops, and after letting Vettel through he fell off the back of the leading pack.